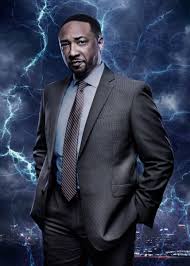 “As suspicions grow that Jefferson Pierce (Cress Williams) is Black Lightning, the ASA arranges to have him arrested. Lynn (Christine Adams) seeks help from Detective Henderson (Damon Gupton). Meanwhile, as Jefferson is in custody, Gambi (James Remar) and Anissa (Nafessa Williams) work together to show Black Lightning is still running around the streets of Freeland” (The CW)

Last week, there was a big reveal as to who was secretly working for the A.S.A. This person was close to Jefferson Pierce. I promised not to reveal it, but it’s important to the episode. So SPOILER WARNING ahead. The A.S.A. Operative close to Jefferson, is his Vice Principal, Kara Fowdy. The character has been seen sporadically up until the end of last episode, and never came off as duplicitous, or evil. Being a spotter for the A.S.A, means that Kara holds a mid ranking position in the organization. The episode, and actress Skype P. Marshall play up this fact well. We see her demanding and in charge with her underlings, specifically with the scientists monitoring the pods with the kidnapped metahumans, and the corrupt members of Freeland P.D. On the A.S.A. Payroll. Yet, we also, see Kara acquis to the demands of her superiors, and assists in framing Jefferson Pierce, because they believe Jefferson is Black Lightning, even though she does not. Given her reaction to the whole scenario and the look on her face when Jefferson is arrested, I sense a redemption story coming for her. I liked the actress’ performance and want to see more of her.

Speaking of Jefferson’s arrest, it really shows you how bought, paid for, and corrupt, the Freeland P.D. Is. They rush arrests warrants and plant bags of Green Light in his car and his office desk. The corrupt cops focused on here are Deputy Chief Cayman and Detective Glennon. Aside from the actual corruption here, what’s important is the students reaction when Jefferson is arrested. They form a wall blocking the entrance. This shows the respect Jefferson has cultivated from his students. He still has to do some teaching, by telling his students that they have to let due process take its course, while they do their job, which is continue to learn and pave the way for the future. When his daughters see him being taken away, they both at separate times, get agitated in defense of their father. He has to talk them down, so there powers don’t come to the forefront, exposing them. It’s so smart that more often then not, be it as Principal Jefferson Pierce, a father, or Black Lightning, Cress Williams’ character is always teaching. Once again, it strengthens the characters secret identity, but also highlights Cress Williams and his character, as the most experienced hero in the DCCW roster. If he does eventually crossover in the Arrowverse, I hope his experience is highlighted.

The corruption within the police force goes further than the officers highlighted, as we see officers beat on Jefferson on his way to booking. Seeing Jefferson restrain himself and his lightning powers and take the cheap shots. Honestly, his arrest and booking process had Jesus crucifixion parallels written all over it. The corruption and police abuse within Freeland P.D. Is reminiscent of Gotham City in Batman Begins, specifically Detective Flass. The corruption highlighted in this episode, allows Inspector Henderson’s honesty and goodness to shine through. Inspector Henderson knows this arrest is a sham and goes out of his way to help clear Jefferson’s name. He uncovers Detective Glennon’s money laundering, threatening to expose him, unless he admitted and exposed the corruption. The detective completely flips on Chief Cayman and Jefferson is eventually cleared and released. Many will think this was a perfect time for Jefferson to reveal the truth to Inspector Henderson, that he is Black Lightning but I’m glad he didn’t yet. I prefer the mystery and the Batman/Gordon vibe they have going on. Keep it going as long as possible.

While Jefferson was in prison, Gambi and Anissa concoct a plan to dissuade the A.S.A’s belief that Jefferson is Black Lightning. Gambi creates a hologram of Black Lightning that can interact and move in unison with Thunder. He then creates a scenario where onlookers watch as Thunder and “Black Lightning” stop a get away truck. This, along with the corrupt cop telling the truth, allowed Jefferson to go free. In a world where Gambi makes high tech armor for Jefferson and Anissa, creating a hologram seems justifiable to me. At the end of the episode, Jefferson tells Gambi that he doesn’t know if he can forgive him, but he can’t forget what he’s done for his family. Gambi eventually joins the family for a celebratory dinner. I loved this because there conflict and disagreement hasn’t been forgot, or swept under the rug. Instead, just like a real life relationship, their friendship is evolving, as a result of events that occur between them, and there consequences.

There are only two episodes of Black Lightning left in the first season. No need to worry though, as The CW has renewed the series for another season, along with the rest of the DCCW shows. All these renewals will change the way I do reviews for the shows, allowing me to cover all the shows more efficiently next season. More on that later. For now though, enjoy the remaining episodes, of this consistently good series.

Next post RTF Review: “YOU WERE NEVER REALLY HERE”