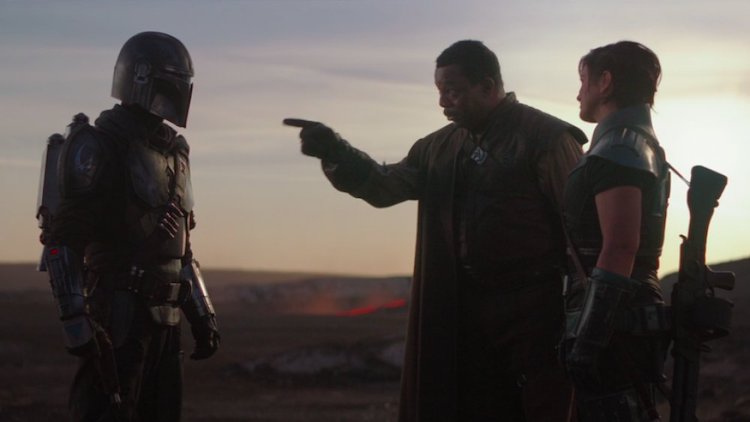 As a note, this review contains mild spoilers for The Mandalorian Chapter 8: Redemption. I would recommend watching before diving in.

The Reckoning, The Mandalorian’s seventh episode, ended on a tragic note. Kuiil (Nick Nolte) was gunned down as he frantically retreated to the safety of Mando’s ship. With the baby in Imperial hands, that is where the finale, Redemption, begins.

Kuiil’s death was the show at its most gut-wrenching. He was one of the first characters to enter Mando’s story; but what made it most difficult was that he wasn’t meant to be caught in the crossfire. He was not a warrior, as many of the bounty hunter’s other acquaintances are. Killing him set the tone for what was to come; it was also an indicator that Redemption would not be all sunshine and rainbows.

So what of Mando? He—along with Greef Karga (Carl Weathers) and Cara Dune (Gina Carano)—was in a predicament of his own. Moff Gideon (Giancarlo Esposito), flanked by a host of Storm Troopers with varying weaponry, had them pinned down.

The scenario presented very little room for negotiation or error; it also afforded them few options. Outgunned and outmanned, they were going to have to shoot their way out.

What follows is yet another excellent episode. Redemption builds upon the brilliance of The Reckoning, providing a taut narrative full of emotional beats and well choreographed action.

I’m not sure any of its moments topped that aforementioned kick in the teeth at the end of The Reckoning, but some came damn close.

The episode—directed by Taika Waititi, who steals the show as IG-11—also utilized humor in unexpected ways. In an episode fraught with tension, those moments of levity were important; and unlike some of his other work, the comedic elements were not overbearing. They are used sparingly, which makes them that much more effective.

His directorial skills have continued to evolve. I can’t help but be impressed with his ability to craft not only large-scale set pieces, but tender character moments, as well. In Redemption, that growth is on full display.

In the end, what impressed me most about the show was its willingness to allow Mando to be understated. He didn’t need to have the last word or provide the moment-breaking quip. He needed to demonstrate the legendary toughness of his tribe. Throughout its eight episode run, that was made quite clear. Universally, the action elements of the show delivered.

Still, it wouldn’t have worked had the central plot not come together as it did. Sure, it meandered at times, but those disparate elements were mostly meaningful in some way. At the very least, they provided further insight into the titular character and how he came to be.

Mando, as the hero, was one of the most intriguing new characters on any show this year. Had it not been for Watchmen, he may have won that title outright.

That is no small feat. There had to be tremendous pressure on Jon Favreau and company to ensure this was a hit.

After all, it was one of the lone tentpole original offerings Disney+ was going to have at launch. It is also a Star Wars property, an IP that Disney has invested in heavily since acquiring it.

To me, The Mandalorian gave fans of the galaxy far, far away everything and more than was expected. More important, it didn’t even require the Sith, the Force, or the Jedi to do so.

As magnificent as the the first season was, that may be its most inspiring trait. There are so many stories to be told, and they need not be beholden to the small sliver of the universe the films have focused on.

If there is one lesson to be learned, that should be it.

The Mandalorian Chapter 8 Score: A+

Next post MFR Says BIRDS OF PREY Is A Fun, Uneven, Romp