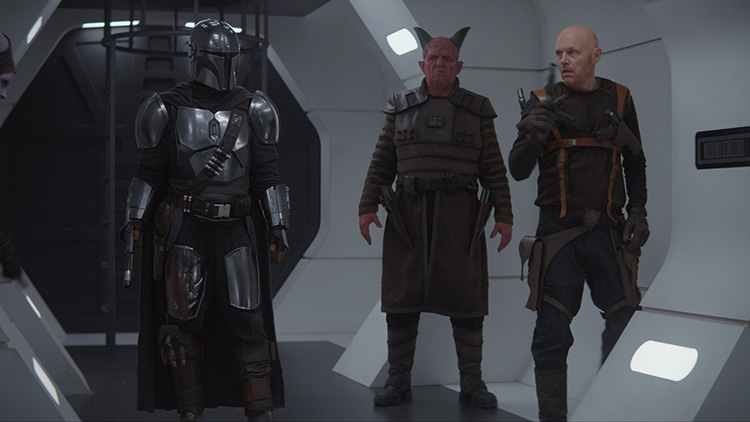 As a note, this review contains mild spoilers for The Mandalorian Chapter 6: The Prisoner. I would recommend watching before diving in.

With only three episodes to go, it was surprising that The Mandalorian again chose to punt on its central narrative in its sixth episode. The tease at the end of The Gunslinger—the shadowy figure who came upon Fennec Shand (Ming-Na Wen)—is nowhere to be seen in The Prisoner. Instead, we are treated to one of my all-time favorite TV/movie tropes: “getting the band back together.”

The Prisoner revolves around Mando and a troupe of misfits—some of whom he has a checkered history with—storming a prison to break out a high-profile tenant. Throughout, there are mistrusting glances, shootouts, and the unfortunate underestimation of the toughness of a Mandalorian. It, quite frankly, is a hell of a lot of fun.

As I mentioned, though, this episode does tread water. At this point in the season, that is a bit frustrating. We’re so close to the end game with seemingly no resolution in sight; and with only 30-35 minutes per episode, it’s hard not to think that a proper conclusion will feel anything but rushed.

That said, despite its continued deviation from the main path, The Prisoner offers more of what the show does best, introducing us to host of new and eclectic characters—Ranzar Malk (Mark Boone, Jr.), Mayfield (Bill Burr), Xi’an (Natalia Tena), Burg (Clancy Brown), and Zero (voiced by Richard Ayoade).

For the most part, these additions are welcome ones. There’s something indescribably cool about Bill Burr and Clancy Brown appearing in a live action Star Wars property. Burr, as Mayfield, did an excellent job portraying someone who is doing their best to play the role of a tough guy, but clearly is a paper tiger. Brown, as Burg, is a grumbling mass of muscle. The other members of the team are similarly unique in what they bring to the table.

Of them all, the highlight for me was Malk. The brief exchanges between he and Mando made me wish we could further explore their past adventures. Apparently, they did some crazy things.

Sadly, not all the interplay or history worked as well as others. Xi’an, a Twi’lek, is the most notable of the characters that fell flat. There’s no doubt that Tena is relishing the dastardly nature of Xi’an, but her performance was over the top in all the wrong ways. She was one note, and her incessant amount of hissing was laughable by the end.

But, let’s get back to why The Prisoner was such a good time: the gunplay. The action, which like the show’s acting has waffled at times, is incredible in The Prisoner. Much of that may be credited to its director Rick Famuyiwa, who also co-wrote it. There are some truly unique shots throughout its runtime, and I think its final sequence may be the most innovative the series has produced thus far.

Mando is a man to be feared and not one to be trifled with. We’ve witnessed that multiple times this season; yet watching this new crew come to that understanding as Mando cut down droid guards, utilizing his bevy of gadgets in the process, was awe-inducing. They, just as we viewers did early on, learned there were consequences for being on the wrong side of a Mandalorian.

Now, there are just two episodes to go. Suffice to say, it’s crucial that The Mandalorian sticks the landing in a satisfying way. As much as I loved The Prisoner, my curiosity about all that was set up early on was still stuck in the back of my brain. It’s time to for him to finally confront the sins of his actions.

The Mandalorian Chapter 6 Score: A-

One thought on “RTF Review: ‘THE MANDALORIAN, S1 Chapter 6”