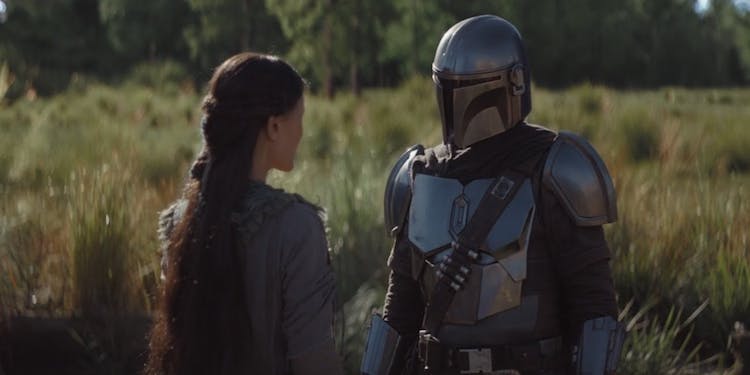 As a note, this review contains mild spoilers for The Mandalorian Chapter 4: Sanctuary. I would recommend watching before diving in.

By the end of The Sin, The Mandalorian’s third episode, the season’s course had been set. Mando had betrayed the code of his profession, killing off many of his competitors in the process and outright betraying the client who’d hired him. As a result, Chapter 4: Sanctuary finds him on the run, hunting for a place off the grid to collect himself.

Similar to Chapter 2, Sanctuary is a diversion from the primary narrative, using its construct to further develop the character of Mando. It works to a degree. Having a protagonist who speaks little and whose face remains shrouded by a mask can be difficult. As a viewer, you can’t read what they are feeling at any given time.

Thus, when the show provides us with those more intimate moments for Mando, they are often necessary.

I’ve often complimented the show for its methodical approach to his backstory; the problem with Sanctuary is that many of its emotional beats and threads felt unearned—particularly Mando’s ludicrous romantic subplot with Omera (Julia Jones).

Their entire chemistry, which is literally built in the space of a few days, is just preposterous. It also didn’t matter much in the grand scheme. We already knew that he was capable of caring for someone else. His actions in The Sin demonstrated that.

But let’s back up the truck. Who exactly is Omera? Well, she’s a member of a village that’s been under attack by raiders. They recruit Mando and fellow bounty hunter on the lam Cara Dune (Gina Carano) to help protect them from the threat.

That is the major conceit of Sanctuary—Mando and Cara Dune uniting to save those who cannot protect themselves; it’s an ode to films like Seven Samurai and The Magnificent Seven (itself an American reinterpretation of the former).

The concept, as familiar and overdone as it has been, is still an intriguing one. Where Sanctuary failed was in its execution. So much of it—like the aforementioned “will they, won’t they” between Mando and Omera—felt rushed.

Mando’s flirtation with Omera was probably the worst offender. But it doesn’t end there. There’s just no connection to these people or their plight, nor is there a particularly compelling reason for he and Cara Dune to join forces. Everything just sort of happens.

Based upon what we’ve learned about Mando throughout the series, his decision to take this fight makes sense thematically, yet it’s also quite reckless and foolhardy considering what he’d just done.

Wanting to help those in need is noble, yet certainly he must’ve understood this wasn’t the time or place for risk. Right? It seems very little thought was put into his understanding of the repercussions he’d face. Nothing defines that more than Sanctuary’s dimwitted final scene. I won’t spoil it, but let’s just say it bordered on story breaking.

Suffice to say, the whole episode needed to be done with more care and consideration. It was also probably the first episode of the season where the condensed runtime did the show a disservice. A third of it is an absurd montage, which left no room for error elsewhere. These failings may have been smoothed over with better acting. Sadly, that was in short supply.

Gripes aside, though, The Mandalorian is still taking us to places rarely seen within the galaxy; even if it failed too often in Sanctuary, that remains its strongest attribute.

One thought on “RTF Review: ‘THE MANDALORIAN, S1 Chapter 4’”