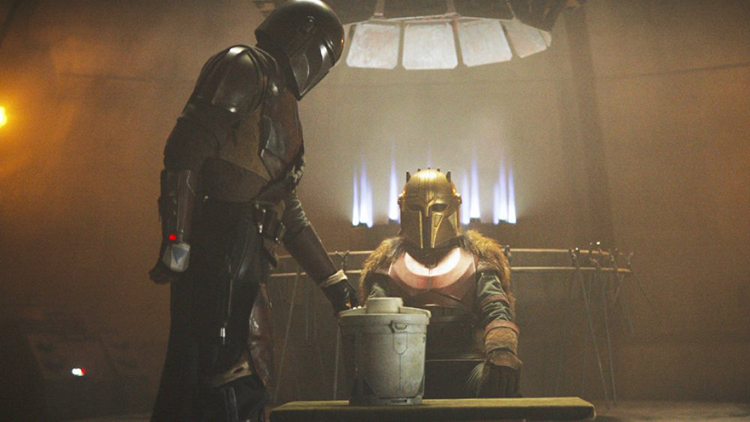 By the end of The Mandalorian’s second chapter, it was clear a moral conundrum was in the offing. Mando (Pedro Pascal)—as the show has chosen to call him—had tracked the prize bounty and was on his way to cash it in. His armor—bent, battered, and broken—served as a reminder of the journey’s cost.

The opening third of Chapter 3—aptly titled The Sin—is a return to the familiar trappings of the first; it’s the back alleys and the barrooms, where the less savory types indulge in their drinks and their trade. This is the type of place that’s off the books and the grid; it’s a place where there’s no shortage of trouble or guns willing to deal with it.

It’s in this introductory sequence that the meat of The Mandalorian’s central narrative begins to unspool itself. The trip back here had carried a distinct melancholy; one his tiny companion was unaware of. For the child, Mando had been a savior from an unsavory situation. Ignorance, as they say, is bliss.

With the target in tow, Mando again comes face-to-face with the Client (Werner Herzog)—the man who’d hired him. The first two episodes established why he sought Mando’s services. What remains a mystery is what exactly he intends to do with the child. That said, one needn’t be an expert sleuth to detect that it’s probably not good. The child’s intended fate, though, is not to be shared. Even posing the query goes against the code of the bounty hunters’ guild.

Yet, as I theorized in my review for the second chapter, The Sin’s entire conceit is built on making us wonder whether Mando’s conscious and curiosity will get the better of him. How it all unfolds is best discovered through the episode itself, so, for fear of spoilers, I will leave it there.

The strength of The Sin is twofold. The setup, detailed above, is the primary cog that makes it work so well. The second lies in the show’s continued devotion to crafting the larger lore of this side of Star Wars’ immense galaxy, as well as to building how Mando came to be and who he is going become. As in Chapter 2, which shined its spotlight on the Jawas, Chapter 3 further explores the world and the history of not only Mando, but of his tribe—the Mandalorians. To say the least, they are not ones to be trifled with; and their armor and anonymity are paramount to how they identify their worth.

The subtler moments of The Sin allow the character beats to really shine; they also simmer the tension, bringing the aforementioned setup to a boil.

Where The Sin ultimately fails is in its action. Its climax ditches much of the ingenuity displayed thus far throughout the series for a fairly ho-hum, overcrowded spectacle. It felt less old west and more random encounter in the Star Wars: Battlefront video game. After growing to enjoy the show’s methodical approach—shootout at the outpost with IG-11 notwithstanding—this gun fight felt out of place.

Worse, there was an overall laziness about it. It just wasn’t choreographed particularly well—especially when compared to the aforementioned bounty droid massacre or even other scenes within the same runtime.

Speaking of … There is a particularly thrilling sequence in The Sin, where the versatility of Mando’s armor and skills are put on display. It, along with Mando’s introduction at the bar in the show’s premiere, ranks among my favorite moments thus far.

Gunplay aside, there were important stakes to The Sin, and the consequence of what occurred in it certainly feel like they are the inciting point for all that’s yet to come.

The Mandalorian Chapter 3 Score: B (almost B+)

One thought on “RTF Review: ‘THE MANDALORIAN, S1 Chapter 3’”