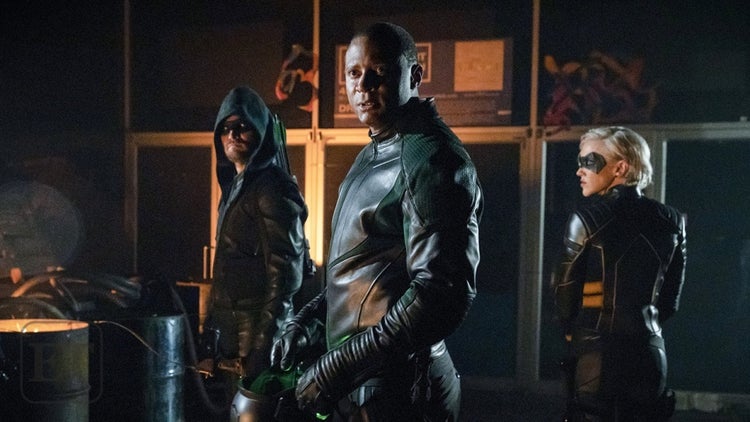 “In the wake of discovering what his future holds, Oliver will find himself pit against his most challenging battle yet, one that will leave the multiverse hanging in the balance.”

For all that Arrow is, it has always lived in the corner of nostalgia. That especially seems to be the point Arrow season 8 is going for. “Starling City” seems to enforce a callback to season 1 of Arrow, with Oliver headed to Earth 2 for material requested by the Monitor. In doing so, we revisit a different path Oliver could have taken on his return from Lian Yu. Colin Donnell, Josh Segarra, John Barrowman and Susanna Thompson all guest star as their respective Earth 2 doppelgängers. And it was so nice to see them return.

While the main plot for this season remains the setup for Crisis on Infinite Earths, it seems as though Arrow will be providing a lot of fan service in each episode. Particularly in dedicating each episode to a previous season of Arrow. This is pure speculation, but after seeing commentary from Stephen Amell and show runner Beth Schwartz, it remains all the more likely in my book. Ten episodes, with one episode dedicated to Crisis on Infinite Earths. Green Arrow and the Canaries, a hopeful spinoff show, will have a backdoor pilot episode. That leaves 8 episodes left for pure Arrow content! It works incredibly well for this Starling City, as Oliver goes back to his roots, but is drawn back in by two people who have become his closest friends.

TFA (Team Future Arrow) seems to have come along fine. TFA still has not sold me on their presence in the show. They seem highly dysfunctional, but purposeful. Mia’s upbringing clearly defines her and her ability to function as part of a group. Just like her father!

Overall, Starling City holds up in terms of great Arrow episodes. Barrowman has been especially missed in terms of his presence on the show. But Segarra and Donnell’s presence really defines Oliver’s reactions here. Tommy Merlyn and Adrian Chase have been two of the most effective characters on Arrow in terms of changing Oliver, and while these weren’t from Earth 1, the effect on Oliver is enormous. I can’t wait to see them again.

What did you think of the final Arrow season premiere? Let us know in the comments below, or on Twitter!