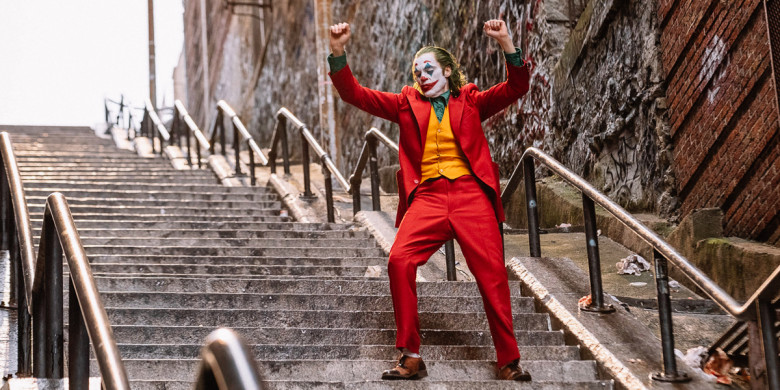 When Joker was first announced circa 2017, fans and critics alike were mixed. Rightfully so, DC’s output at that point was hit-or-miss critically and commercially and they had a ton of questions: Comedy director Todd Phillips? The guy who did Road Trip, Old School and The Hangover movies? Will it be in-continuity with the greater DCEU? Will it be good? Fast-forward almost exactly 2-years from it’s initial announcement and I can say what we’ve received is something truly poignant, gripping and a path DC should continue to pursue moving forward.

Joker doesn’t adapt a specific comic book arc, but is rather a wholly original story with some cherry-picked nods and details lifted from some iconic Joker stories. You’d be forgiven as a casual viewer if the credits rolled and you didn’t realize this was a comic-book movie or had anything to do with the Batman universe. Aside from some glimpses of the Wayne family (as seen in the trailers) and the word “Gotham” uttered no more than a handful of times the connective tissue to Batman and the wider DC world are practically non-existent.

Joaquin Phoenix plays Arthur Fleck, a mentally-ill man trying to navigate an increasingly violent and apathetic society while trying to take care of his ailing mother. Gotham is essentially 1980s New York City, which was a far-cry from what it is today. Crime is everywhere, garbage floods the streets and there is civil unrest amongst the populus as the gap between the upper class and lower/middle classes has reached a zenith. This is a very dark and all-too-real Gotham with an atmosphere that looms over the entire film and may be the best interpretation of the fictional city put on film to date.

As pervasive as the city of Gotham is itself, make no mistake this is Phoenix’s film. Phoenix plays Arthur with a childlike naivety and almost effeminate energy. His performance is completely his own and doesn’t call-back to prior Joker performances. The boldest choice is that the iconic Joker laugh comes from a real disorder called pathological laughter. It’s extremely unsettling and painful to watch, as it actually pains Arthur himself physically and mentally when having a laughing fit. Few actors can pull off what Phoenix has managed to do in this film. Sure, no other actor’s had a chance to film an interpretation of the Joker’s origins before (in this much screen time! I see you Nicholson fans), but you’d be hard-pressed to show me a more fully-realized, developed, truthful performance where you can accurately trace a character’s evolution and descent into, er, acceptance of madness; Every shift, every epiphany, every choice is meticulously illustrated by Phoenix. I will be shocked if we don’t have our second Oscar for a Joker portrayal.

Much of this is made possible by director Todd Phillips and frequent collaborator and cinematographer Lawrence Sher. The way the camera will just linger on Phoenix, especially on his face, in extreme close-ups is captivating and disturbing. The camera work brings a layer of tension and intimacy to the film that you don’t see in it’s big-budget contemporaries. The film also feels and looks as if it was made in another time, very much evoking the films Phillips had repeatedly stated as inspiration such as Taxi Driver, Serpico, and One Flew Over the Cuckoo’s Nest. The script itself could be a little on the (clown) nose for its’ own good, but the material is elevated by Phoenix and supporting cast.

The original score provided by Chernobyl composer Hildur Guðnadóttir is evocative of Jonny Greenwood’s score for There Will Be Blood and also some hints of Hans Zimmer’s Joker theme from The Dark Knight. The layers of raw, tense strings hanging onto notes a bit too long, not resolving where you expect them to and straying into atonal dissonance depicts Arthur’s deteriorating mental state and inner workings of his mind to great affect.

As far as the remainder of the cast, they all serve their purposes well. As I stated above, this is really Arthur’s world and we are really seeing everything from his point of view. All the other characters just live in it, make their impression to push the narrative forward and then are gone. Brett Cullen delivers an interesting version of Thomas Wayne in the few scenes he’s in. Zazie Beetz is fine as pseudo-love interest and neighbor to Arthur. Frances Conroy shines as Arthur’s frail mother, Penny Fleck. However, the real standout is Robert DeNiro’s Murray Franklin. Perhaps it’s because we’re so used to seeing DeNiro play a tough guy, puss-faced gangster that it’s absolutely refreshing to see him as an animated, smiling and jovial late-night show host.

Joker is something truly unique and special. Repeated watches will undoubtedly result in new revelations and discoveries. This is an incredible direction for DC to take, even if it is outside of the “main continuity” and I hope we see more bold, one-off takes on our favorite DC characters. This film should prove that it can work and very much differentiates itself from its competitors.

As far as the conversation on the violence in the film, which has taken on a life of its own, I didn’t feel like it was any more violent than most rated-R films that come out today. While there are certainly some shocking moments, I feel they are telegraphed in advance and the tension comes from what exactly is going to trigger the act and when it’s going to happen. All of the violence has a purpose; It has an impact on Gotham and on Arthur, especially. None of it is wasted or gratuitous. Each escalation of violence takes a toll on Arthur and triggers a shift in his character. Not once are we asked to be compassionate or defend Arthur for the acts he commits. Quite frankly, I’m shocked to hear so much talk about the violence in this movie, when the opening sequence to another recent WB film, IT: Chapter 2, had violence I felt was more upsetting and played solely for the shock value and subversion of expectations than anything in Joker. The point being, this movie does not seek to empower those who would do wrong.

Lastly, it’s impossible to watch this movie and not draw parallels to many topics currently at the forefront of the social and political sphere. This film has a ton to say on mental illness and the way we treat (or don’t treat) those suffering from it. While director Todd Phillips had pitched his film as “a cautionary tale” about what happens when society disregards those they deem unfit, and many people will watch this film and say the message is that we need to push for positive mental health and gun reform, I ultimately left the film more cynical. We as a society are all responsible and maybe, just maybe, we deserve the monsters we create.

Previous post RTF Original: BIRDS OF PREY Will Bring Some Swagger Back To DC on Film

Next post Road To The Final Season: SUPERNATURAL Season 6