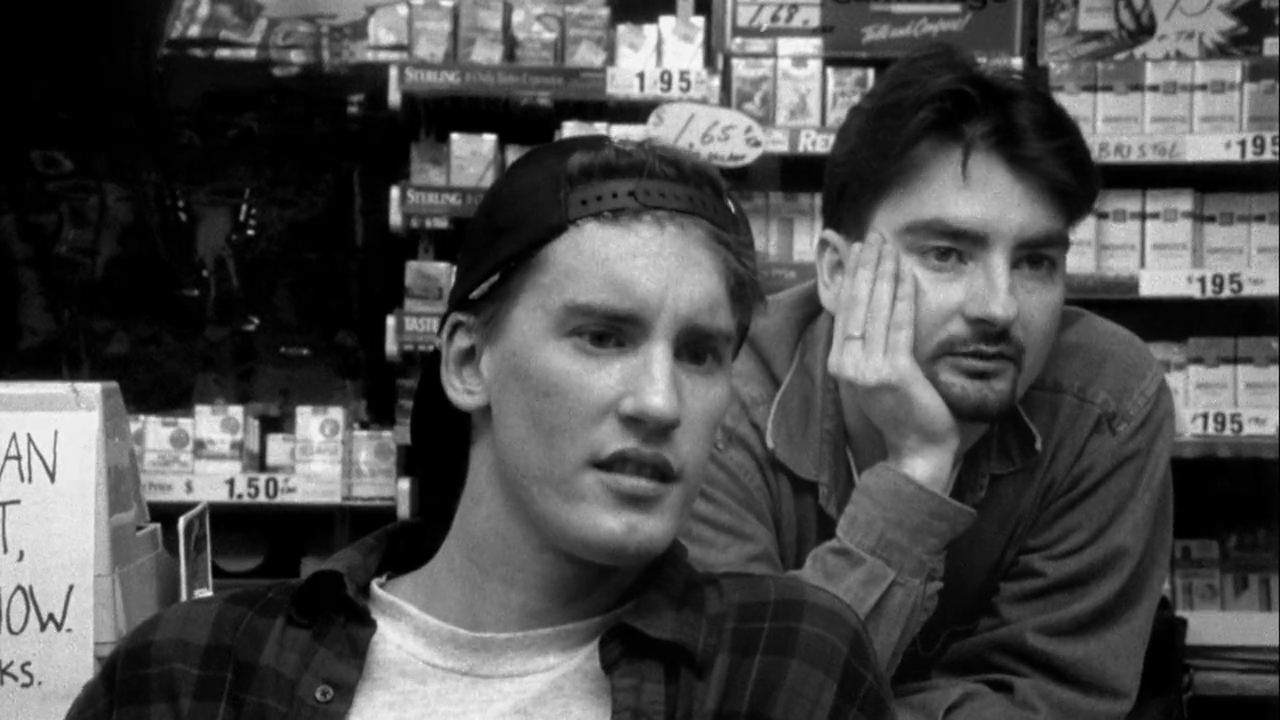 Okay, like Kevin Smith himself, this will be a bit verbose in order to set the stage. Clerks II in 2006 was the ViewAskewniverse’s swan song. After that, Smith kept making movies, but went on a bit of a journey and made some weird stuff. A few years ago he got an itch to play with his old toys again, and wrote Clerks III.

Well, as Kevin says, you need four Clerks to make the sequel work, the two inside the store (Dante and Randal) and two outside the store (Jay and Silent Bob). Jeff Anderson, who plays Randal, did not want to return, so Clerks III was dead.

So Smith shifted to sequelizing Mallrats instead. But Universal owns the rights to that, and wasn’t interested in making a movie. Instead, they suggested making it with their TV division. Smith’s Mallrats became a TV show, but the pitches were unsuccessful. Nobody picked it up and that was dead.

The only two characters Smith himself owns is Jay and Silent Bob. So he decided to sequelize Jay and Silent Bob Strike Back instead, and that did get funded, they shot it, and it comes out in October. You can watch the trailer right here.

But that got the conversation going about more ViewAskewniverse flicks. Clerks III as a script, exists. But it is not the Clerks III that Smith wants to make now. However, he is hosting a live reading of that script for charity, which will hopefully make it online via one of his podcasts, so if you wanted to hear it you could. If a Clerks III does happen, it will be a different version. Smith talked about it at his Hall H panel in San Diego this weekend. (Thanks to Comicbook.com for the transcript):

“When I wrote Clerks III, I wrote it during a weirder, darker point in my life, and it’s kind of like the King Lear of our movies,” he said, adding that the movie is about death. “I love it, it’s one of my favorite scripts, but it’s dark. It’s bleak, and it’s not what Dante and Randal deserve. We’re never going to make that verison of Clerks III, but I’m going to write a different Clerks III and we’re going to make that f–king film, I promise. And in a world where we got to bring Ben back, I’ll be able to bring Jeff back.”

That last reference is worth mentioning. Ben Affleck was a staple of Smith’s early films. But they had a bit of a falling out, and didn’t work together for years after. Yet you see him show up in the Jay and Silent Bob Reboot trailer. So how did that happen? Smith lays it out:

If Affleck and Smith can reunite, I have faith he can extend an olive branch with Anderson and make this thing happen.

The reason for Jay and Silent Bob Reboot existing is actually quite sweet.

Smith feels the same way about Dante and Randal too, which fuels his desire to get Clerks III finally made.

“They gave me this much, I owe them one last thing.”

I have a feeling that bringing Reboot to the public will reignite the love for these characters, and let Smith make Clerks III and Mallbrats. While Reboot can serve as a swan song, it can also open the door for the next phase of the ViewAskewniverse. Either way, Reboot will be something special.

I will believe Clerks III happens when cameras start rolling. Until then, I’ll be happy with what he have. Once upon a time, Smith planned to make a movie called Moose Jaws (which is just the movie Jaws with a moose) and kill Jay and Silent Bob in that. While I believe he still wants to make Moose Jaws and will do one day, I doubt very highly he will kill off Jay and Silent Bob now. I feel like that was him trying to close a chapter of his life for good, but now is happy that it can be reopened.

If Clerks III happens, I will be first in line. Until then, we have Jay and Silent Bob Reboot to enjoy in October.

Next post Road To The Final Season: SUPERNATURAL Season 5 Review