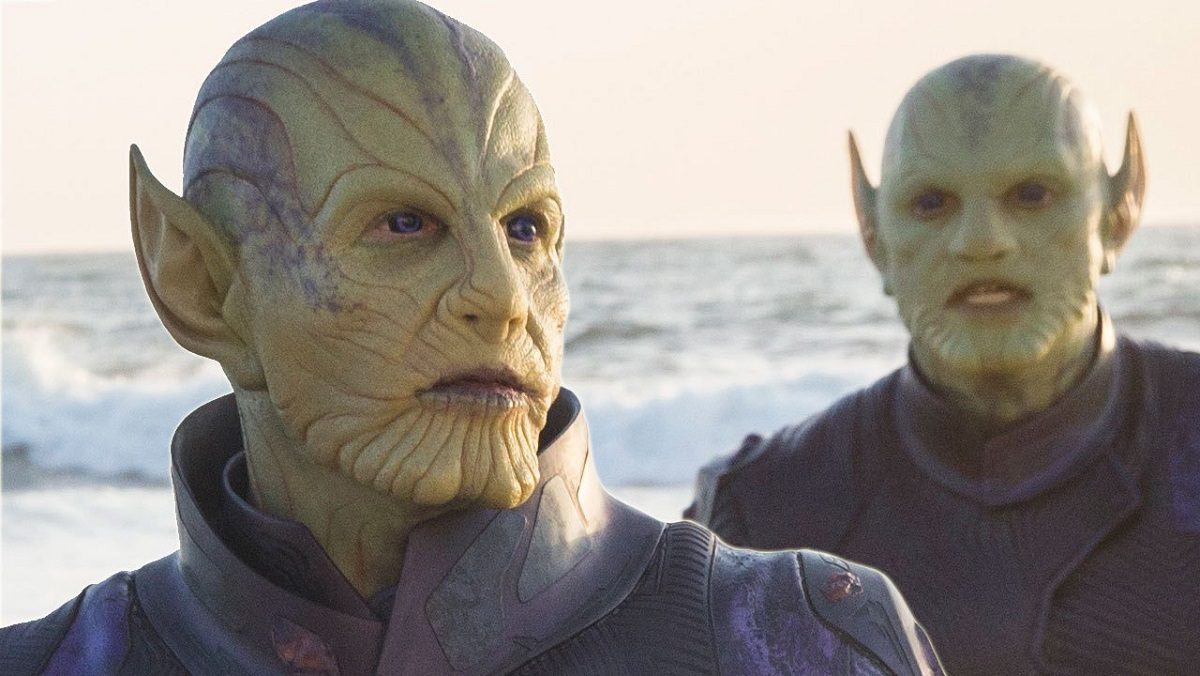 When Captain Marvel debuted earlier this year (yes, that was this year), it laid the groundwork for the Kree-Skrull war, with a clever twist that made it even better. It is a big part of the Marvel comics, and could be coming to the MCU eventually.

There will be SPOILERS for Spider-Man: Far From Home beyond this point, so do not proceed if you haven’t seen the movie yet.

Spider-Man: Far From Home used both of its credits scenes to perfection, the mid-credits one brought back an old face, and showed what a formidable foe Mysterio actually was, changing the future of the MCU forever by revealing Peter’s identity to the world. The post-credit scene offered another shock, revealing that Fury and Maria Hill, were actually the Skrulls Talos and Soren we met in Captain Marvel, played by Ben Mendelsohn and Sharon Blynn respectively. It further revealed that the real Fury was in space (far from home…), working on….something. So what does it all mean?

Well, Fandango sat down with Kevin Feige to discuss just that. He says this about the Skrulls having a further presence in the MCU, through Far From Home.

“Well, that Kree-Skrull war was a big part of the comics and a big part of the Captain Marvel mythology that we wanted to build into. And there’ll be lots of questions like, what was Captain Marvel up to in the 20-plus years between when she flew away at the end of Captain Marvel to when she appears in Endgame? That particular line, though, is one of the handful of Easter eggs sprinkled throughout the film that Maria or Fury say that give an indication that something’s different about them.“

The line he is referring to is when Fury mentions “Kree Splinter Cells.” There is rarely a throwaway line the MCU. It will be interesting to watch Far From Home for a second time, with the knowledge of the post-credits scene.

In fact, you will catch stuff like what Feige mentions next:

“Fury does things earlier in the film where he refers to the earth to Peter as “your world,” instead of “our world.” And when you watch it for the first time, it just goes by. But when you watch it a second time, knowing what’s coming, it’s fun to see that they’re there. And Jon Watts is very good at laying in those Easter eggs.“

There are still questions that remain, like how long has Talos been posing as Fury, and which one did we see get “blipped” in Infinity War. It is possible that Fury has been in space for all five years, and really was one of the survivors all along. But personally, I don’t think so. The Fury at the end of Infinity War had the beeper, and seemed to be the in-charge, steps ahead person he always was. But now the door is open to anybody being a Skrull, which could provide some interesting appearances in future movies. Believe nothing. What a way to launch Phase 4.

Are you excited to see them further explore the Kree-Skrull war in the MCU?

Next post Jon Watts Talks About That Jackpot Cameo In SPIDER-MAN: FAR FROM HOME