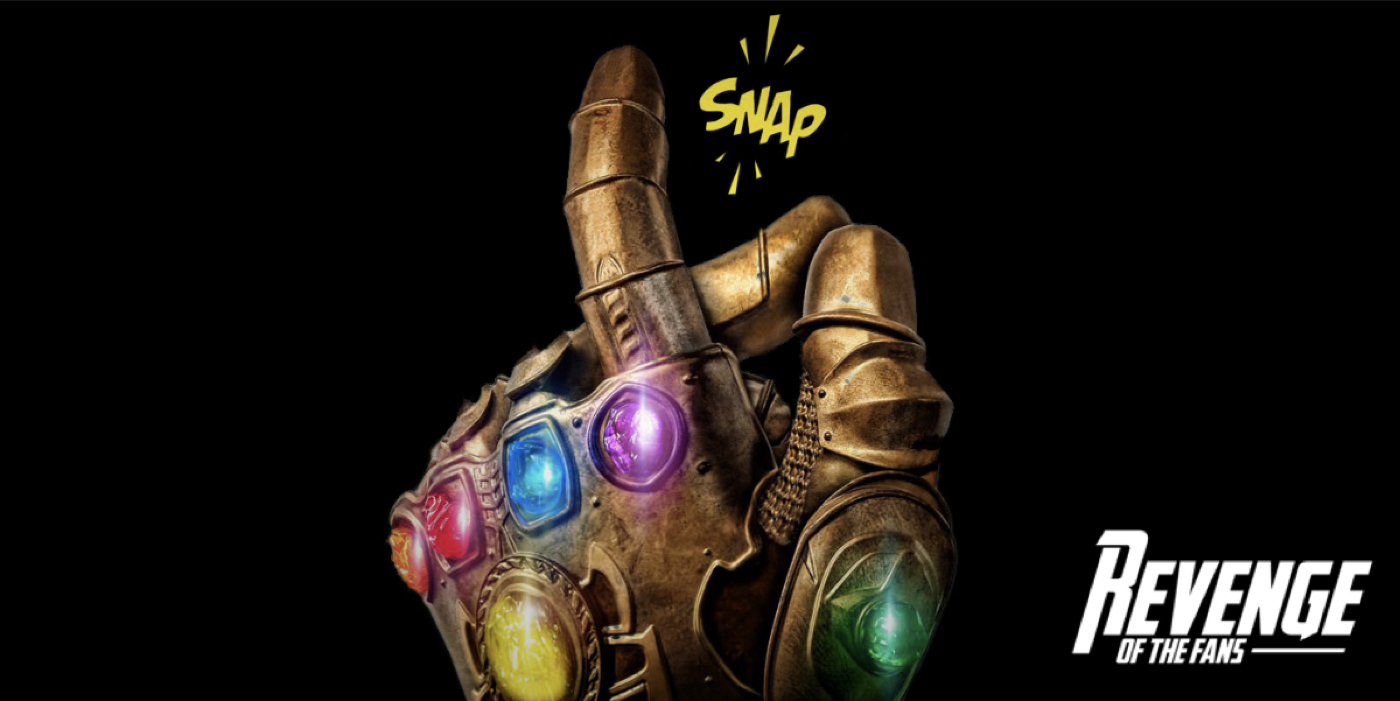 With Avengers: Endgame‘s box office run nearing its end and Spider-Man: Far From Home less than a month away; I can’t help but wonder about the future of the Marvel Cinematic Universe. Our first glimpse at this future will be revealed through the eyes of Peter Parker in the Spider-Man sequel; which has a dual role within the MCU, acting both as the final installment of phase 3 and as an epilogue to the eleven-year story arc dubbed “The Infinity Saga” by Marvel Studios’ Kevin Feige. What I find the most interesting though, is how this movie will also act as the jumping-off point towards new universes. Not only in the movies; but also on TV as the MCU continues to expand through the multiple mini-series that are in active development for Disney’s streaming platform, Disney+, which arrives later this year. The Marvel Cinematic Universe is evolving in big bad way and I couldn’t be more excited.

As I examine the MCU’s ever-changing landscape and devour all the promo clips for Spider-Man: Far From Home; there is one concept that has been teased a lot that makes my spider-sense go bonkers. Even more than Mysterio being the villain of the film, Nick Fury recruiting Peter or the theory that MJ (Zendaya’s character) might actually be Fury’s estranged daughter. If you read the title of this editorial, you would know that I am referring to the introduction of the Marvel Cinematic Multiverse.

Now, please allow me to clarify something. In my understanding, I don’t believe that we should ever assume that the multiverse that might be discussed in this movie is by any means limited or unrelated to the Spider-Verse explored in the fascinating animated film, Spider-Man: Into The Spider-Verse. I have always understood that the Spider-Verse is simply the most commonly known corner of the Marvel Comics Multiverse due to the multiple Spider-Verse centered events that have occurred in the comics throughout the years. I’d like to think that Feige found it fitting to introduce the multiverse as a concept that will shape the entirety of MCU moving forward through the movie of the character that is most frequently referenced with the idea of a multiverse.

But even though it is exciting to think that the Marvel Cinematic Multiverse is finally on the horizon, one could ask: Why haven’t we seen any signs of it till now? Luckily, after my last viewing of Avengers: Endgame, I think I’ve cracked the code one why we are just about to board the multiverse train and what event could have been the catalyst that has allowed all these universes to start colliding against each other in ways that we have never seen before.

**Spoilers Ahead for Doctor Strange and Avengers: Infinity War, Endgame and Spider-Man: Far From Home clips and trailers**

Even though the first time that we have seen or heard of a Marvel Cinematic Multiverse in a scientific sense is through clips from Spider-Man: Far From Home, it is not the first time that we have heard of the existence of a multiverse. That introduction is found in 2017’s Doctor Strange. During the first training session that Doctor Stephen Strange endures under the tutelage of the Ancient One; he is sent in astral form, through a kaleidoscope of infinite universes that exist parallel to our own. The film’s climax itself consist of our hero preventing Dormammu, a being that abides in a different universe or plane of existence, from invading our reality.

One could easily assume that these events cement the fact that the multiverse has always been there and that these universes have always collided or interacted with one another; but I don’t think that is the case. In the different occasions that we saw the multiverse explored in Doctor Strange, this was only made possible through magic. In the case of the Ancient One, she sent Strange’s astral form through the multiverse but not his physical body. Also Kaecilius, the film’s main antagonist, is able to create a rift in our dimension which allowed Dormammu to invade our world; but only thanks to an incantation. We also learn throughout the film that the different Sanctum Sanctorums around the world, like Doctor Strange’s abode on Bleecker Street, protect the Earth from otherworldly threats; which explains why part of Kaecilius plan in the movie involved him destroying the different Sanctums.

This means that there have always been barriers, whether of a magical or cosmic nature, that have protected our reality from others folding into it.

The question is: What has changed?

Let’s look at some of the info that surfaced from the Spider-Man: Far From Home. Watch the trailer below and pay close attention during the 1:15-1:35 mark:

In this trailer, Nick Fury states that “The Snap tore a hole in our dimension”. For all of us that have seen Avengers: Infinity War and Endgame, when someone talks about “The Snap”, we automatically assume that they are referring to the Thanos’ Snap at the end of the first film which erased 50% of the population in the universe. I would beg to differ. This gauntlet snap, though tragic, didn’t do anything that would affect the defensive structures in place that safeguard our reality from all the others. That said, there is an even more important factor that we can’t ignore. The Thanos’ Snap in Infinity War is but one out of the four Infinity Snaps that occurred in the span of the last two Avengers’ films.

So…which Snap could Fury be referring to?

My money is on the Snap that no one witnessed. The Snap that happened off-screen during the 23-day gap between Infinity War and Endgame. The Snap through which Thanos destroyed the Infinity Stones.

The reason this distinction is important is because the other 3 Snaps only affected the MCU, now “officially” recognized as Earth-616 of the Marvel Cinematic Multiverse. The first Infinity Snap by Thanos erased 50% of the population in the universe. The third Infinity Snap by Hulk brings back that 50% of beings that Thanos erased back on 2018 to their present time of 2023. And with the fourth and final Infinity Snap, Tony heroically gave his life to erase Thanos and his army from existence. All three of these Infinity Snaps only affected factors that affect the 616 universe; but bear no harm to reality.

This means that it had to be the destruction of the Infinity Stones through Thanos’ second Infinity Snap that tore a hole in our dimension and made Earth-616 multiverse central.

We learn in both Infinity War and Endgame that the Infinity Stones have been an integral part of the universe since its inception and that they play a key role, not only in our understanding of the flow time but in safeguarding our reality. The Stones existence practically defend it, according to the Ancient One. In Endgame, she explains to Bruce Banner, that if even one of the Infinity Stones is removed from her reality; it would make her world vulnerable to threats. Banner proceeds to ensure the Ancient One that she does not have to worry about the Stones being removed from their respective timelines because if he ensures to put all the Stones back to in their proper place in time; it would be as if they never left and reality would remain protected. And the Hulk kept his word and recruited the First Avenger for one final mission at the end of the film and the Stones were returned to their place in time.

But even though Captain America’s final mission was a success; a historical fact remains unchanged. A fact that has left the universe fractured and vulnerable.

As the Avengers regroup and prepare for the time heist, through which they succeed in borrowing the Infinity Stones from different points of their past; Professor Hulk gives Scott Lang and Rhodey a crash course into time travel and history. I make the distinction because the Hulk doesn’t necessarily explain how time travel works as much as he lectures them in how someone’s history does not change just because they travel through time.

This suggests the following theory:

Even though a person can travel to multiple points in time, that person’s history stills remains linear throughout their jumps in history. In other words, a person’s history always moves forward and never backwards; no matter where they are within a timeline.

If the latter is true, does this mean that Cap’s final mission was pointless? Not at all. This simply means that even though the day was won against the forces of the Mad Titan; one historic fact that couldn’t be changed with a Snap or by returning the Stones to their rightful place in time still remains. Present day (year 2023) Earth-616 is a reality in which the Infinity Stones are no more. The MCU has been left torn and exposed to a multitude of alternate realities by the destruction of the Infinity Stones at the hands of Thanos and there is no way to undo it. It is a fixed moment of their history. The MCU has really been forever changed.

Our heroes were able to avenge our universe; but are they ready to face whatever challenges and threats the multiverse? Personally, I can’t wait to see what the multiverse brings; but I have faith that it will lead to some amazing fantasies and tales of suspense.

But then again, the villain of Spider-Man: Far From Home is Mysterio and like the great Kevin Smith stated on his review of the first trailer; the one thing we can’t ever forget about Quentin Beck (Mysterio), is that he’s always been and always will be a liar. Is he lying about the whole multiverse thing or just about being a hero? I guess will see on July 2, when Spider-Man: Far From Home hits theaters.

What do you think? Do you think that Marvel Studios is going all into this multiverse thing or are they just teasing us? Are you excited to see what it could mean for the MCU? Do you agree with my theory? Think I’m nuts? Let me know in the comments section below or look me up on Twitter!

Till next time, true believers!

Next post BLACK WIDOW: Ray Winstone Joins The Cast, And What Kind of A Prequel Is It?