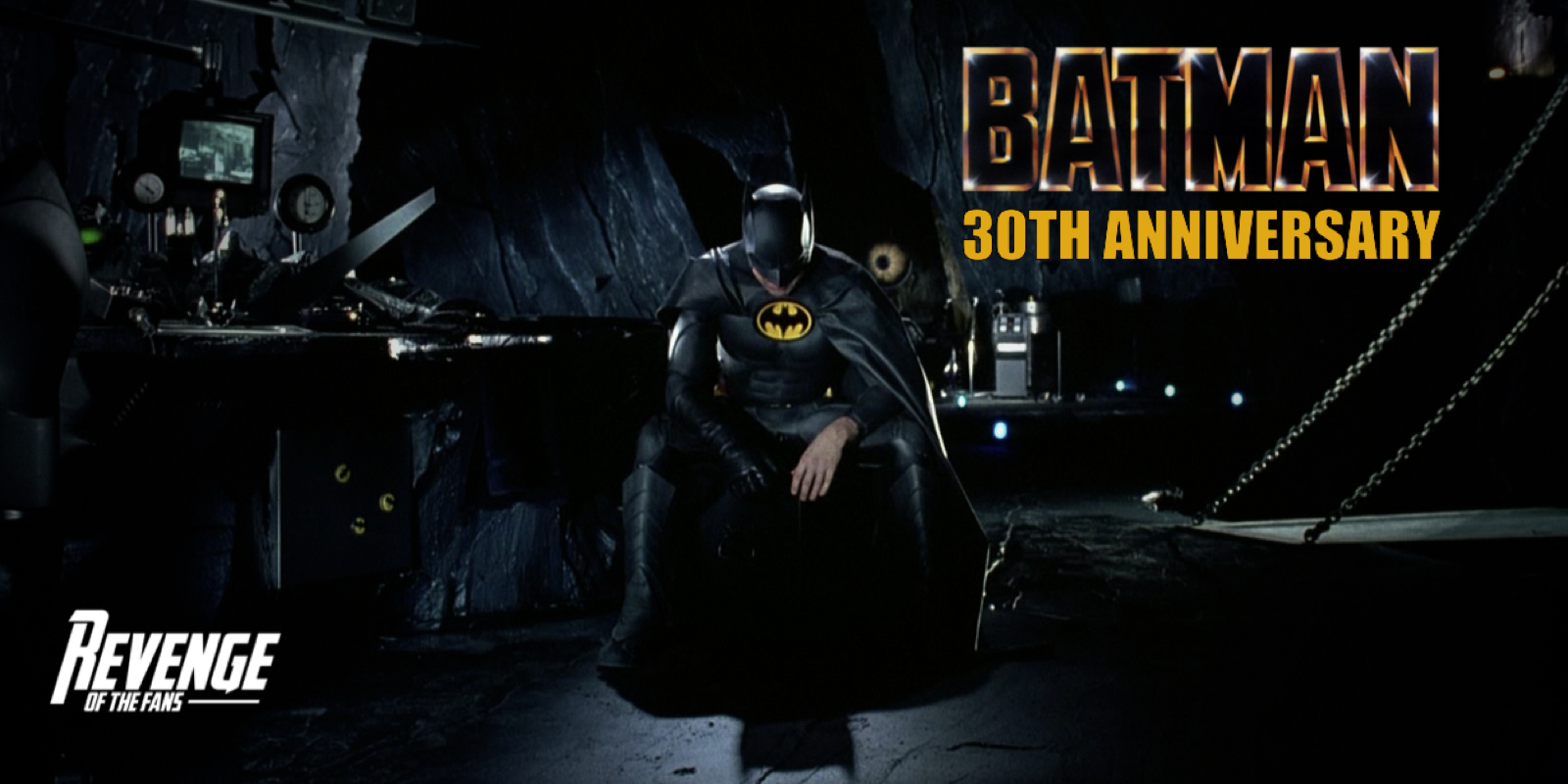 “Can somebody tell me what kind of a world we live in, where a man dressed up as a bat gets all of my press?” In 1989, everyone knew about Batman. He was that colorful fellow played by the now late Adam West who hung out with a young man in green short-shorts and a yellow cape who made puns while KA-POWing evildoers. He was a fun fantasy for children and adults worthy of a chuckle or a groan.

Tim Burton, who was coming hot off the heels of Beetlejuice, signed on to direct Batman. Burton truly had his work cut out for him as the character had already undergone a literary metamorphosis in comics and graphic novels penned by the likes of Frank Miller, Alan Moore, and Denny O’Neil. Still to the general public, he was a campy throwback to the 1960s.

A more serious take on the Caped Crusader was finally coming to fruition. But, when Burton cast funnyman Michael Keaton, who was most notable for being Mr. Mom, as the titular hero, fans nearly hunted Burton and WB executives down with torches and pitchforks. As one might’ve said:

“I want to see The Dark Knight, not Mr. Mom in spandex.”

No doubt the casting of Keaton is what gave birth to what is known today as “fan backlash”. And what’s ironic is that no matter how many times the director gets it right, fandom is always proven wrong.

The casting of Keaton is still, 30 years later, a tremendous choice- especially when you consider what the 1980s thought the action hero archetype should be. In a decade where audiences were conditioned to think that every action star needed to look like Arnold Schwarzenegger and Sylvester Stallone, Keaton’s casting was as bold as they come.

So why do some call B89 and Michael Keaton their favorite iteration of Batman? Let’s discuss and revisit what can be regarded as what defined a superhero blockbuster.

Based off the film’s opening seconds, you can tell the tone was boldly different than the old Batman and Robin TV series. Gotham City looked big, gothic and dark. When Michael Keaton’s first lines as Batman were “I’m not gonna kill you. I want you to do me a favor. I want you to tell all your friends about me,” you knew a complete tonal shift was in motion.

This movie was a far turn away from West’s Batman. Instead of wearing gray spandex, Batman wore black rubber armor. The Joker killed people and in certain scenes, Nicholson was convincingly mean. There wasn’t even a Robin, nor did it need one.

Executive Producer Michael E. Uslan had this to say about the significance the film has 30 years later:

“For those of us who were Batman “fanboys” and “geeks.” For those of us who weren’t “hip” or “cool” for being into Batman and comic books as well, B89 made all of that cool. People who had never read a comic book in their lives were flocking to comic book stores to buy Batman comics and comics in general. It totally changed the perception that comic books were only for eight to ten year old boys. Of course, that started a few years earlier, in ’86, with The Dark Knight Returns , but Batman ’89 brought it to a whole new level. And from the film, you got Batman: The Animated Series. You wouldn’t have had that type of animated Batman if it wasn’t for B89. Remember, before BTAS, they were just “cartoons” for kids. All of sudden, we’re now making “animated series” for teenagers, college students and adults.”

A cool side note is B89 ended up being the highest grossing movie in the summer of ’89, beating out Indiana Jones and the Last Crusade, Back to the Future II, Ghostbusters 2, Lethal Weapon 2, and so on.

What really drives B89 is the relationship between two damaged personalities: Batman and Joker.

Contrasting the fact that we knew very little about Batman in this movie, we knew everything about the Joker right away. He was crime lord, Carl Grissom’s number one mobster who enjoys finer things like art and music. He only becomes a real super-villain due to the meddling of a Caped Crusader. After his transformation, he becomes a terrorizer. He kills people because he loves killing. And he does it with a smile. To him the whole world is a punch line now. Yet, there is something satisfying about a clown called The Joker truly enjoying being a goof, albeit a homicidal one.

Adding Vicki Vale in the movie gave something for Bruce Wayne to care about. Bruce and Vicki are instantly attracted and both fascinated by one another and it truly gave Bruce Wayne a reason to share a life with someone other than the criminals he beats down in the night. But, her beauty didn’t go unnoticed as she became the object of the Joker’s pursuit (multiple times). His obsession with Ms. Vicki Vale added that Beauty and the Beast element to the movie and Nicholson really pulls it off.

The most criticism the movie has faced in recent years is how little regard it shows for the comics. Only in the 1930s comics did Batman kill. In fact, for most of Batman’s existence, his strict no-killing policy has been crucial to the his mythos. However, in B89, Batman does kill.

Another controversial decision came when Alfred, his most trusted advisor openly lets Vicki into the Batcave. But probably the most problematic change for fans is the twist that it was the Joker, as a young Jack Napier, who killed Bruce’s parents and thereby inadvertently created Batman.

While the complexity of Batman and Joker’s relationship is brilliantly explored in Nolan’s TDK, it has never been portrayed as more symbiotic than in B89. In the comics, Batman’s order needs Joker’s chaos. But for Burton, it is good and evil co-existing between the two because they literally make and remake each other out of necessity and desire.

Jack Napier created the only singular force that would one day stop him. Batman created an unstoppable adversary to justify his existence.

It can be argued that B89 is more a Burton fairy tale than a comic book adaptation, but that’s what WB signed up for when they brought Burton on so it shouldn’t have come as a surprise. And, at a time when fans are clamoring for artistic integrity and for studios to simply let their creators create, I would hope everyone can appreciate the freedom Burton had to mold the Batman mythos in a way that excited him as a storyteller.

B89, in my humble opinion still ages well today because it is not an action flick of its time. This movie transcended the comic book movie genre. It brought in the dark, psychologically layered, gritty tone that a Batman movie deserves. It was the real debut of “The Dark Knight” on screen. Keaton’s casting reminded us all that as fans we need to learn to be less reactionary. Jack Nicholson gave a classic character a new lease on life. Danny Elfman gave us an iconic theme that many continue to associate with Batman.

Make no mistake, B89 has its flaws but it’s got way more memorable moments to enjoy.

“Batmania” was truly running wild in the summer of 1989. June 19th will mark the film’s 30th anniversary! What a feat!

Is Michael Keaton your favorite Batman? Let me know in the comments below or drop me a line on Twitter.