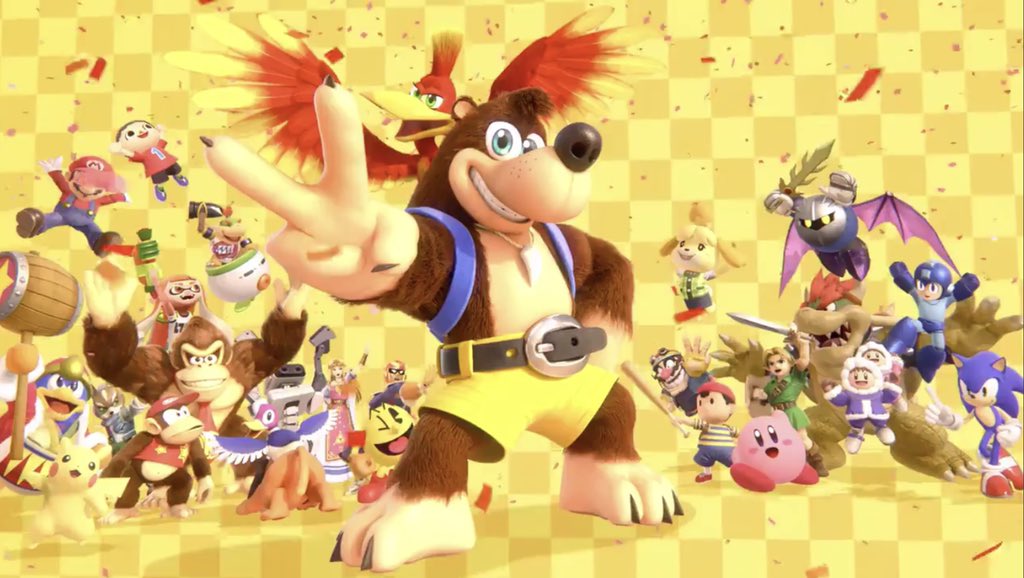 In centuries to come, time will be measured in “BBR” and “ABR”. (“Before Banjo’s Return” and “After Banjo’s Return”). We are officially in the ABR era, and it is still difficult to believe. Okay, so maybe that won’t happen. But what happened during the Nintendo Direct at E3 was nothing short of extraordinary. Banjo-Kazooie was officially announced as a DLC character in Super Smash Bros Ultimate

Let’s set the stage. Rare was a company that made several games for Nintendo in the 90s. They were involved in making the best Donkey Kong games the world has ever seen. They also developed their own original characters like Conker, and Banjo and Kazooie. Banjo-Kazooie had two very popular games on the Nintendo 64. The future looked bright for The Bear and The Bird on Nintendo. But in 2002, Microsoft purchased Rare Ltd, and all of its assets. The company began to make games for the Xbox. Banjo-Kazooie’s last game was in 2008 on the Xbox 360 called Banjo-Kazooie: Nuts and Bolts. While the game is not without its fans, everyone knew their true home was on Nintendo.

Nintendo, meanwhile, had several of their own properties and were doing just fine. One of their biggest franchises, Super Smash Bros was growing bigger and bigger. The third entry into the fighting franchise, Super Smash Bros Brawl, introduced 3rd party characters to the roster when it was released in 2008. Sonic the Hedgehog and Snake from Metal Gear Solid joined the fight. Their inclusion opened up a whole new world of possibilities. Instantly fans began clamoring for Banjo-Kazooie to enter the franchise.

This has been in the making for over a decade.

When Smash Bros Ultimate released last December, the game’s creator, Masahiro Sakurai gave fans things they’ve been requesting for a long time. Ridley from Metroid, who was said to be too big, made it in. King K. Rool, who was needed for the severely under-represented Donkey Kong franchise made it in. While those were awesome, they are also characters owned by Nintendo. So they seemed more likely than others. More third party characters made it in as well. But it always corresponded with some Nintendo release. Simon Belmont from Castlevania joined the roster. Shortly thereafter, a classic Castlevania collection was released to play on the Nintendo Switch. When Joker from Persona 5 was released as DLC, so were plans to release a version of the game on Switch. Even the first announcement from this year’s E3, The Hero from Dragon Quest, was followed shortly by plans for a version of the game to come to the Switch. So even those left-field pipe dream characters made sense. They have games available to play. They had representation on Nintendo outside of Smash Bros. Joker was still a very surprising choice, but makes sense, since the franchise now has business with Nintendo.

Banjo-Kazooie is owned by Nintendo’s competitor. Microsoft makes things to try and get video game dollars away from Nintendo. They created a game console to occupy the same market space as Nintendo consoles. Why on Earth would they ever let a valued IP show up in a competitor’s game?

It was huge news when it was announced that Spider-Man would appear in Captain America: Civil War. After all, Sony had the license for Spider-Man. Disney was making Civil War. Sony makes movies to compete with Disney. Sony wants to beat Disney at the box office. For them to give arguably the most popular Marvel character to Disney to use was unprecedented. But the decision made sense for two reasons: Money and love.

People who might have been suffering from Spider-Man fatigue after 5 movies in 15 years would be reenergized. Marvel fans have been clamoring for the character to mingle with the other Avengers. Sony would get to use some characters they don’t have the license to for their new Spider-Man movies. Marvel Studios boss Kevin Feige is just a big a superhero fan as anyone. So making this work was a labor of love. He wanted to see Spider-Man and Iron Man together as much as you or me. Fans love it, both companies come out as good guys, and they both make money.

The Banjo-Kazooie thing is a bit more extreme than that. At the end of the day, Spider-Man and Captain America are both owned by Marvel. It is just their movie rights that are separated. This would be more like if Feige were able to get Batman in the next Avengers movie. What if you saw Ronald McDonald eating a Whopper? Or Steve Jobs using a PC? Or the Ford family drive a Chevy Silverado?

Nintendo is a beloved company in the video game industry. Sakurai is a beloved game director. From the get-go, Smash Bros Ultimate was touted as “a celebration of video game history”. They even found a way outside of just playable characters to get representation from hundreds and hundreds of video game franchises into the game. Avengers: Infinity War was called “the largest crossover ever”. Smash Bros Ultimate said “Hold my beer.”

Banjo-Kazooie represents pure nostalgia for most people. They were a big part of a lot of video game fans’ lives. Then they up and vanished. They were sitting on the bench of a company that didn’t utilize them for over a decade. Rumors swirled of their involvement in Smash Ultimate before its release. However, just like how the Grinch stole Christmas, Banjo fans had their hope stolen when the game was released without them in it. The introduction of DLC fueled the Banjo-Kazooie hype-train once again. But every passenger on it had been in the crash from the previous hype-train, so they proceeded with caution. Sakurai had confirmed that we would hear about our next DLC character at Nintendo’s E3 presentation. Most of us assumed that it would be held for the end. After all Smash is one of Nintendo’s crowning jewels. It will keep people watching the other smaller things if they are expecting that at the end.

When the Nintendo Direct started, the usual intro and fanfare happened, then it went right into a Smash character announcement. An announcement that didn’t seem at all Banjo-Kazooie-esque. Well, that was actually merciful of Nintendo. They ripped the bandage off quickly. Even still, we got a really cool looking new character called The Hero from the Dragon Quest series. While I’ve not played those games, I was happy for new and fresh representation in Smash. I was happy for all of the big Dragon Quest fans who wanted them in. But a little piece of my soul died, that once again Nintendo’s prodigal son was excluded because of a set of unfortunate circumstances. I had no doubt in my mind that if Rare was owned by Nintendo, or if Nintendo had bought Banjo from the company, that he would have been in Smash 2 games ago.

I’ve been watching Nintendo Directs for years. They always close with something huge. If they lead with Smash Ultimate what could they possibly be closing with? Could this Direct be a new trend of putting everything on Front Street right away? Of course not. Nintendo knew what they were doing. For a Direct that stumbled in the middle, they recovered and performed one of the best endings in video game announcement history. Not only did they announce a sequel to one of the best games made in the last decade, but they finally welcomed their family home where they belonged. Banjo and Kazooie are back on Nintendo.

The trailer was a play-off of their K-Rool reveal trailer. It was perfect, leaning into Rare’s history with Nintendo, poking fun at the “Duck Hunt clone” commentary, while also celebrating their Nintendo roots.

Even people who didn’t use Banjo-Kazooie understood the impact. They were like me with Dragon Quest characters: Happy for the people who are fans of The Bear and The Bird. With them being DLC, that means Microsoft will make money off their involvement in Smash Ultimate, getting a certain percentage of every download sold. If you’ve seen any of the reaction on the internet recently, they will get a lot of downloads. Fans love it, both companies come out as good guys, and they both make money. Sound familiar?

I am still trying to adjust to a world where Banjo and Kazooie are back home. I am eternally grateful that they are back where they belong. I hope this leads to more cooperation between Microsoft and Nintendo, and we can either get a Rare Collection released on the Switch, or the development of a new Banjo-Kazooie game. But that would just be bonus. Being in Smash is good enough, and if you think I’m exaggerating, just listen to Banjo-Kazooie composer Grant Kirkhope:

His riff on Han Solo’s line in The Force Awakens is appropriate. Banjo-Kazooie are truly back where they belong. Just like when Star Wars returned with Episode VII, it was a part of my childhood I said goodbye to, convinced I’d never see it again. Both instances were the happiest I’ve ever been being proven wrong.