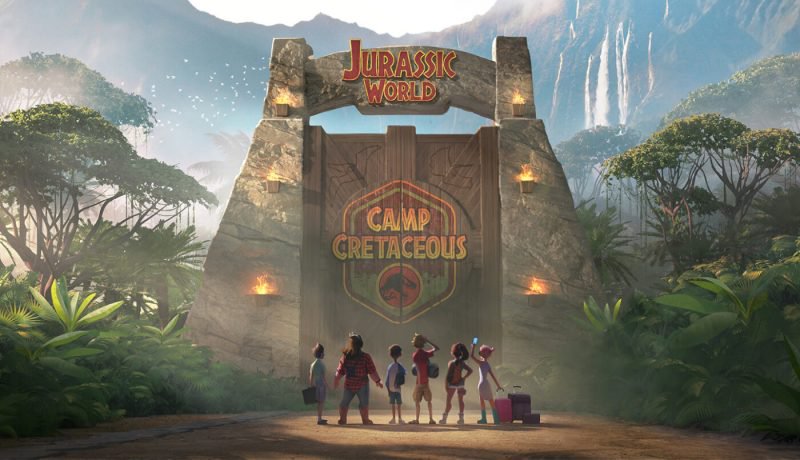 Jurassic Park is adding a camp, Camp Cretaceous to be precise. It’s set in the timeline of the park’s “reopening” in the sequel Jurassic World series with Chris Pratt. Variety states the animated show will follow six teenagers who are provided a unique opportunity to attend an adventure camp on the opposite side of Isla Nublar from the park. But when the park’s dinosaurs get out of control, the group of teenagers are stranded. This forces them to work together and go from strangers to family in order to survive the camp. Netflix has ordered the show from DreamWorks Animation, with it set to premiere in 2020.

The showrunners for Camp Cretaceous are Scott Kreamer and Lane Lueras, and they will also serve as part of the executive producer team. Filling out the rest of the executive producer team is Frank Marshall, Steven Spielberg, and Colin Trevorrow. Zack Stentz will serve as a consulting producer for the show. Camp Cretaceous is only the latest show from DreamWorks Animation and Netflix’s partnership for Universal Pictures properties. Current shows on Netflix as part of the partnership are She-Ra and the Princesses of Power, the Tales of Arcadia trilogy, and The Boss Baby: Back in Business. Works in progress for the partnership include an animated Fast and Furious series.

Set to be a trilogy, the first two Jurassic World movies have almost hit the $3 billion mark at the box office. Jurassic World 3 is set to premiere in theaters on June 11, 2021. So with Camp Cretaceous premiering in 2020, could we see some of these teenagers make an appearance in Jurassic World 3? Maybe have Chris Pratt or Bryce Dallas Howard make an appearance? It makes sense to see that with Trevorrow and Spielberg executive producing the TV show. The announcement featured a trailer with a Velociraptor and music from Jurassic World, so check that out below!

Are you excited for this new part of the Jurassic Park franchise? Let us know in the comments below!