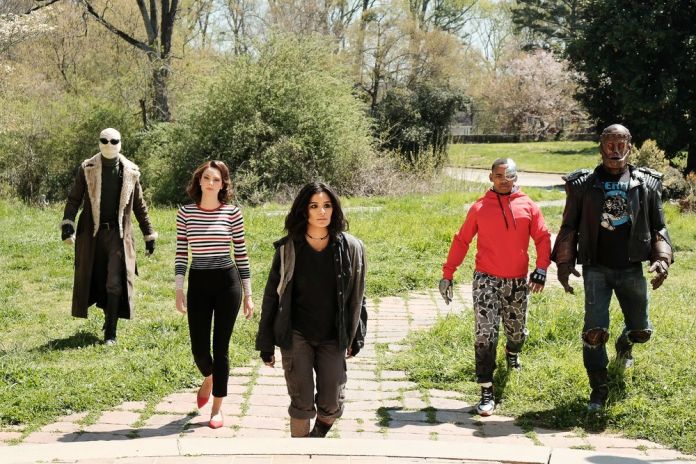 “In the wake of the Chief’s revelation, the Doom Patrol go their separate ways in the season finale. But when Mr. Nobody hatches a new plan, the team must reunite to help the Chief with a new unexpected (and weird) threat to the world.”

Stop right there! Have you read the review for the previous episode, or watched Ezekiel Patrol? If not, check out the review HERE, go watch the finale. Then come back for this review of Doom Patrol‘s season finale, Ezekiel Patrol. There will be spoiler discussion down below, so beware!

The first season finale for Doom Patrol felt like an average season finale. We’ve had a conflict brewing all season, and it came to a forefront in last week’s episode, when The Chief (Timothy Dalton) was revealed to have caused all of the “accidents” related to each member of the team gaining powers. He did all these things in the pursuit of immortality to protect the world from his daughter, Dorothy Spinner. The team split up, Negative Man (Matt Bomer / Matthew Zuk) and Rita Farr (April Bowlby) going off on their own while Rita pursues being a Drama Teacher, Crazy Jane (Diane Guerrero) going off alone, with Robotman (Brendan Fraser / Riley Shanahan) apparently following as a protector. Cyborg (Joivan Wade) returns to working for his father (Phil Morris), except he’s only handling purse snatchings and cyber crime.

The team has to come together in the final thirty minutes in order to rescue Danny and The Chief’s daughter. Danny has been the guardian of the daughter, and has therefore been attacked as her protector. The rest of the episode revolves around that mission, rescuing Dorothy from the clutches of Mr. Nobody (Alan Tudyk), Admiral Whiskers, the rat from Therapy Patrol, and Ezekiel (Curtis Armstrong), a cockroach with a smashing need for prophesying doomsday. The season ends on a typical cliffhanger, The rescue inadvertently causes a problem that will need to be rectified, as well as concealing the face of Dorothy.

For what it is, it was good. My expectations were through the roof for the finale though, especially after Penultimate Patrol. Cast, character development, characters themselves, the weird factor has all had an amazing contribution to the season. Personally, I wanted something bigger and bolder than what we got. Having Whiskers and Ezekiel make out was just plain weird, I’m not counting it. Though I will say it was a creative way to transition Robotman from the rat, to the cockroach. Overall, plot wise, it felt like a normal TV season finale. Good, but nothing truly special to standout.

The best part of the finale was Mr. Nobody’s turn from evil mastermind, to contributing minor good guy during this episode. Rita was the convincer, and she’s masterful. I have grown to love her over the season, and I’m genuinely proud of the character she’s grown to be. I liked how they continued the “tell your own story” narrative from last week, and brought Mr. Nobody back to his confident self. It reiterates one of the theme of the season, even though someone stepped on your story doesn’t mean you can’t retake it. The team accomplishes that in this episode as well. Even though they were created for the wrong reasons, they’re going to use their powers for the betterment of the world.

Negative Man makes his biggest turn of the season as Larry and the Negative Spirit finally are able to use their powers as one, and rescue the group. Granted everyone was still affected by the radiation, hence the group being shrunk, but that’s a problem for next season! While not yet confirmed for a second season, Doom Patrol has been rumored to already have a greenlight for a second season. So what am I hoping for next season?

First of all, keep up the weird factor, and keep the team together. The strongest episodes Doom Patrol has are when the weird are high, and the team is in the same mission. Second of all, give me more Mr. Nobody. Tudyk is a star, and he is perfect for this show. Let him narrate again, or better yet, bring in Brain, Gorilla Grodd and let the brotherhood form up again, with Mr. Nobody the joker of the group. Third of all, I’m interested in the incorporation of Dorothy Spinner, as an immortal child, and the possibility it brings on if more superheroes will be added to the mix.

Fourth, keep the group small for awhile. I think it will be absolutely hysterical trying to get the group back to normal height, and it could be interesting to see the dynamic. It would also force the team to deal head on with The Chief’s experiments on them. Finally, I need more Crazy Jane. I feel like she slipped almost off the radar the last half of the season, when she was a highlight of the first half. No matter what, Guerrero deserves award nominations for her work on the show, as does the writing staff.

The full first season of Doom Patrol is streaming on DC Universe now. What did you think of the season? Let me know in the comments below! Stay tuned here for more on Doom Patrol after Ezekiel Patrol, here at Revenge of the Fans.

Character of Focus: The Chief