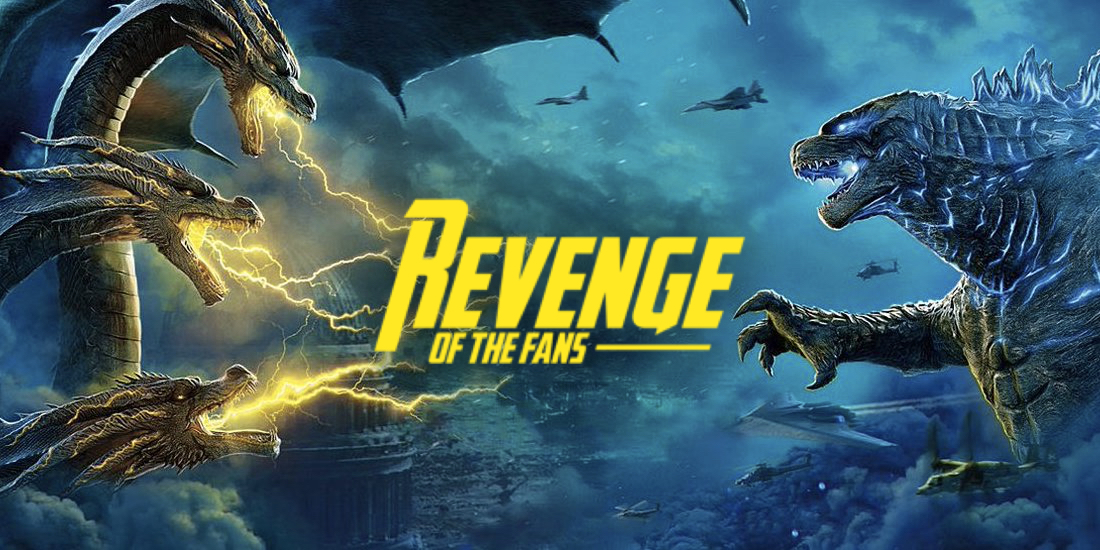 As anyone who follows me over on the twitter can attest, I was quite excited for Godzilla: King of The Monsters. Going back to last summer’s San Diego Comic-Con, when Warner Bros. and Legendary laid the amazing trailer I’m posting below on us, I had a feeling this movie was going to be something special.

And that’s really saying something, because I was not terribly impressed with the Gareth Edwards film from 2014 that sets the stage for this super-sized sequel. While I dug the fleeting moments our titular monster was actually on screen and doing the things we paid to see a Godzilla movie to see, I thought the human subplot was dull, distracting, and took up way too much of that film’s running time.

I entered the screening last night wondering if director Michael Dougherty would make that same choice, trying to get us to buy into excess amounts of human melodrama while forcing us to be very patient as we wait to see these legendary beasts unleash their primal rage on an innocent city.

And what I found was more of the same, only different.

See, Dougherty’s film does spend an inordinate amount of time focusing on humans attempting to raise the stakes for the Kaiju Battle Royale that the title of the film promises, but this time rather than the humans being dull, they’re a bunch of dopey exposition machines.

For some reason, the screenplay by Dougherty and Zach Shields, which is based on a story they wrote with Max Bornstein, thinks it’s necessary for every single thing in the film to have an explanation.

Why say “Get this chopper in the air right now!” when you can shout “We need this helicopter to do a vertical takeoff at 120 thingamajigs to these specific coordinates that won’t matter in 2 seconds!“

The script is filled with clunky explanations, and needless exposition, with each character simply waiting for their turn in the rotation to explain stuff to us about why we should care, or what a particular scene means. It’s all TELLING when SHOWING would do.

And that’s made all the more disappointing by the fact that these characters are all played by such a magnificent cast! We’re talking Vera Farmiga, Kyle Chandler, Ken Watanabe, Millie Bobby Brown, Sally freakin’ Hawkins, Ziyi Zhang, Charles Dance, and Bradley Whitford. Like, what? That’s an all star team of gifted performers, and Dougherty has them running around basically holding up cue cards telling audiences how they should feel at a particular time.

None of the drama clicks, most of the big moments don’t feel earned, and the stuff that’s supposed to tug at your heart strings is more likely going to raise the gravitational pull your palm has for your face. It did for me.

I couldn’t shake the sense that Dougherty was “going for” something, rather than successfully pulling it off. In this case, with some of the early setup sequences where we’re getting to know the main human characters, I couldn’t shake the sense that he was going for an Indiana Jones meets Jurassic Park tone. And, to that end, some of his visual transitions and cheesy dialogue seemed to be in service of that kind of feel, but they were missing that hint of kitsch and camp that Steven Spielberg is so good at weaving into family-friendly action adventures. Dougherty made the mistake of having his uber-talented cast play everything super straight instead, and it just doesn’t work.

It reminds me of when he co-wrote Superman Returns and, similarly, was going for that Richard Donner Superman: The Movie tone, yet failed at actually delivering on any of his inspiration’s actual charm and wit. So I’m detecting a trend here. And I say that as someone who still defends that movie to this day, mind you.

But enough about this film’s biggest failing, i.e. that its human cast is totally wasted and that their subplots all feel excessively over-stated. Let’s talk about where Godzilla: King of The Monsters shines.

Godzilla himself, and all of the creatures we encounter throughout the film, are handled fairly masterfully.

From their overall designs, to how they interact with the environment around them, to the nuances of their existing relationships to one another, Dougherty hits a grand slam when it comes to the kind of kaiju mayhem you hope to see in a movie like this.

I was frequently in awe at the grandiose imagery and breathtaking scope of the movie magic on display in Godzilla: King of The Monsters. It was everything I’d hoped for, and a little more.

When it comes to showdowns between giant monsters, it can be hard to keep things interesting. After all, you’re just looking at two or more massive lumbering beasts grapple one another. You’re not going to see inventive hand-to-hand combat and surprising physical feats. Yet I’m happy to report that the fight choreography and overall staging of the kaiju battles depicted here are amongst the best I’ve ever seen- if not the best. Almost like good professional wrestling matches, they found a way to tell stories using only physicality- providing twists, turns, and ongoing subplots for all of the super-sized chaos.

And for that, I’m grateful.

Now if we could’ve just cut down the human “drama” by 30 to 45 minutes and let the monsters do most of the heavy lifting for the movie, then Godzilla: King of The Monsters would be an absolute triumph of modern day blockbuster filmmaking.

And I know, I know. Some of you will say, “Then what are you complaining about? I don’t go to a Godzilla movie for interesting humans. I go to see monster madness! So it sounds like they delivered on what I want, so just shut your mouth you loser blogger!” But…I’d like to point out that it’s the humans you’re not there for who will spend most of the film’s 132 minute running time begging for your attention.

So you just have to prepare for the fact that a good 80% of the film is silly humans doing dumb things, and telling you all about it.

If you don’t mind that, and are okay with the fact that the 20% of the film that’s dedicated Godzilla and co. are absolutely breathtaking, then I can safely recommend this film to you.

But if you’re like me and have a really short fuse when it comes to lame dialogue delivered at a break-neck pace by watered-down one-dimensional characters, then you may want to think twice.

The last thing I’ll give Dougherty here is that while he may have repeated the same overall swing-and-a-miss on adding to the cinematic legacy of a beloved character that he did with Superman Returns, just like with that film it’s clear that his heart is in the right place and that he does, indeed, love the film’s central iconic figure. Back then, it was Superman. This time, it’s Godzilla.

By the end of the film- which my dad will be happy to hear features a cover of Blue Oyster Cult’s late 70s rocker “Godzilla” sung by Serj Tankian- Dougherty wants all of us to stand up and shout, “Long Live The King!“

And I almost did.

Here’s hoping the next director to take the baton for this Monster Universe, Adam Wingard, borrows more from Jordan Vogt-Roberts’ playbook. Vogt-Roberts did a fairly expert job of creating the kind of atmosphere I think these movies need- one where the human drama is clearly secondary, the characters are mainly relatable, and there’s a sense of monstrous fun waiting for you around every corner. If you’d like a reminder of what I thought of his Kong: Skull Island– which was the second film set in this universe as part of our the build to next year’s Godzilla vs Kong, you can watch my video review for it right here: