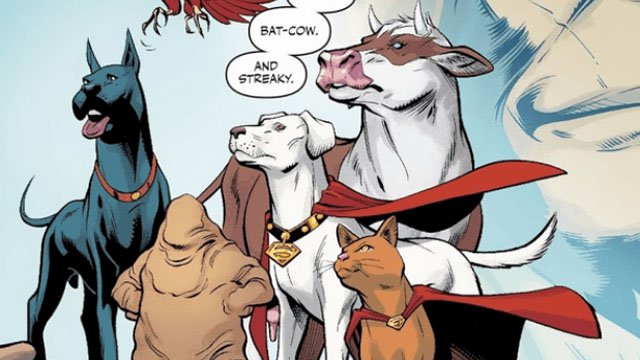 DC Super Pets was originally set to release on May 21 2021 and now it appears to have been delayed. The film is being written and directed by the LEGO: Batman writer Jared Stern, and will star the DC’s trios pets. Krypto the super-dog, Superman’s best friend, Jumpa the kangaroo, Wonder-Woman’s furry friend, and Ace the bat-hound, Batman’s crime fighting dog. The animated picture is now set to debut May 22, 2022, marking it a 366 day delay.

DC Super Pets is also being directed by Sam Levine, and is being produced by Patty Hicks. The super hero pets first made their debut in the comic book world in Adventure Comics issue 293 back in February of 1962. The team has had a wide variety of members, and each human superhero is not limited on how many animals are considered as pets. For instance, two of the original members of the team were Superman’s Krypto the super-dog and Streaky the super-cat!

It was probably inevitable that DC was going to move this film around, since Warner Bros. seems content to limit DC to two films per year for the time being. The last movie of DC’s 2019 schedule will be October’s Joker, though Patty Jenkins does wish she had kept her original November 2019 release for Wonder Woman 1984. Instead the Wonder Woman sequel will debut in June of 2020, with Birds of Prey coming out a couple months before it in February. 2021 already has its two lined up: Matt Reeves’ The Batman (June), and James Gunn’s The Suicide Squad (August).

Which other DC film do you think might join DC Super Pets in 2022? Is there another super-pet you’d like to see appear in this animated movie? Let us know in the comments below, and stay tuned for more on DC Super Pets here, at Revenge of the Fans.

Next post X-MEN: FIRST CLASS Writer Wants To Make An ALL-STAR SUPERMAN With McQuarrie, Starring WHO?!