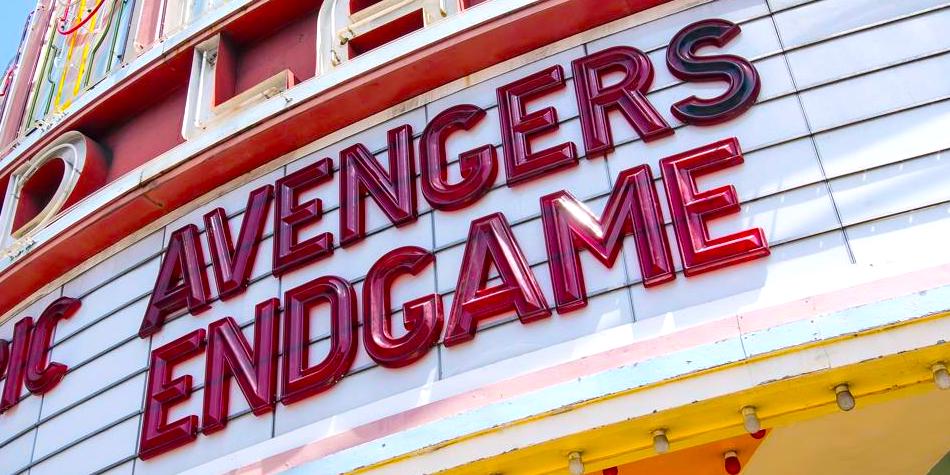 As you may have heard, Avengers: Endgame holds the title for the biggest box office opening weekend of all time, and it did it in record time. I can’t think of better objective proof of just how popular it and the Marvel Cinematic Universe are… but I want to talk about something subjective. I want to talk about something that’s at once tangible and intangible. I want to talk about something that’s palpable and that you can really only experience in a movie theater. You can get tastes of it elsewhere, samples, so to speak, but it lives most potently in the experience of watching a movie like Avengers: Endgame during its opening weekend. I’m talking about the sensation of sitting in a room of like-minded individuals and experiencing the same emotions with them; how those emotions, because of that shared experience, are then amplified. Please take a moment to think about how many people in other theaters—in your multiplex, your town, city, state, in your country, all over the world—were experiencing the same thing. Does your pulse not quicken? Your eyes water? Do you not suddenly feel the vibration of a wavelength that you didn’t necessarily notice before? I certainly did.

If you have noticed it before, I am genuinely glad for you, as I believe this experience to be a privilege. I’ve noticed this before, too—and not exclusively with the Marvel Cinematic Universe.

I’m an actor, and I am so because of one profound experience. There were many things in my life that led to me pursuing acting as a hobby, then as an extracurricular, then as a career, but there was one moment in which I decided that acting wasn’t just a career option but a spiritual and creative necessity, a vocation I needed to honor in any and all possible ways.

I did a play in my junior year of college. It was very small, and very intimate, but the effect it had on the audience was so profound as to affect those of us on stage. Now theater, of course, is live and in-person, so, as the performer, you’re always going to get some energy from the audience. While it’s not exactly passive, it doesn’t tend to alter your performance drastically. You’ll feel it, and it can excite you, and drive you forward, but most often it’s in a manageable, controllable, harvestable way. This is by no means bad, but there is a difference between a good performance and something transcendent—almost magical.

During this experience I heard people in the audience actively sobbing. All of us involved knew we had a good play on our hands, one that, if we did our jobs right, could affect people—but we had no idea it would work that well. That energy fed us on stage and our new, amplified energy in turn affected the audience even more until we were all stuck in this feedback loop of emotion that was overwhelming to the point of us all being grateful the play was so short.

I had never experienced anything like that before, and I knew it was a feeling I needed to experience again, that a life spent chasing that kind of magic was a life of which I could be proud.

Since then I’ve experienced that a few more times, in a variety of ways. One was another play I did where I didn’t experience one profound moment so much as I was constantly aware of a low-grade but still potent feeling of magic throughout the entire production. If my original experience described above was an explosion, this one was a white-hot crackle. (Think of the image of Doctor Strange opening a portal with his Sling Ring: that sparking, golden energy? Imagine that as a current running through and under this two-plus-month-long process.)

Another was one that will be a bit more familiar to you readers: attending Star Wars Celebration in 2015.

Not long before this Star Wars Celebration, you’ll likely remember, Lucasfilm and Disney announced a new wave of Star Wars films and The Force Awakens was to be the first of them. Regardless of how you feel about the movies now, the anticipation back then was astronomically high.

Briefly, for those of you unfamiliar: Star Wars Celebration is the largest fan convention devoted to Star Wars. Think Comic Con–but just for Star Wars.

So Star Wars Celebration Anaheim in 2015 revolved around The Force Awakens. That first day there was a panel with J.J. Abrams, director of TFA, Kathleen Kennedy, president of Lucasfilm, and the cast. I was fortunate enough to be in the room for that panel. I had to wait in line overnight and that in itself was a special experience: everyone there loved Star Wars so it was a warm and welcoming and exciting environment to be in—and that sensation was only amplified once you got into the room for the panel itself.

At that panel Abrams said something that will stick with me for the rest of my life: he said that the energy in the room, the support and encouragement and excitement he felt from the audience, was evidence of the Force.

Of course he didn’t mean that he suddenly believed we could lift things with our minds or shoot lightning from our fingertips. He was referring to a sensation that connects people, that makes you aware of the people around you, that makes you aware of the world around you in a profound way. To quote Obi-Wan Kenobi, the Force is “an energy field created by all living things. It surrounds us, it penetrates us, it binds the galaxy together.” The Force is not magical powers, but whatever binds us together.

I believe in that Force. Again: I don’t believe in the ability to levitate or project a form of yourself across space and time, but I do believe in that potent awareness of the world around you, of the people around you and around the world. It’s spiritual, and that was what I felt, sitting in a theater the opening weekend of Avengers: Endgame.

This is true for many things. I saw Star Trek in 2009 (happy 10th anniversary to that movie, by the way), at midnight, and was delightfully, tearfully overwhelmed by the crowd’s celebration when it saw the Starfleet logo rotating in the title screen, their cheers and applause when they saw the Starship Enterprise for the first time. I feel this at a New York Yankees baseball game, when the entire crowd loses their minds over a home run, a great catch, a game-winning hit!—you’re all experiencing the same emotion at once! Think back to the last time you were in a crowd and you shared a feeling with a whole crowd. It’s profound! You feel a part of something larger than yourself!

But all those crowds may not quite be as large as the crowd of people that watched Avengers: Endgame opening weekend–$1.2 billion worth of people!

So go back to your theater experience watching Endgame: the laughter, the joy, the cheers, the tears. I could hear people sobbing all around the theater (which most certainly took me back to that fateful production all those years ago). We were all of us, in that theater, in theaters like that all around the world, bound together in our joy, our sorrow, our mourning, our celebration.

I saw the movie once, and then I saw it again with friends who hadn’t seen it and, from what I could tell, with an audience of people that mostly hadn’t seen it either. This was only twenty-four hours after I had first seen it so everything in the film was still very fresh in my mind. I sat there in anticipation, waiting for the audience to experience what I knew to be coming. The moment Hawkeye’s family disappears; when Black Widow sacrifices herself; when Nebula’s treachery climaxes and Thanos’ ship appears over the Avengers compound; when Steve catches Mjolnir; when all the Avengers return; Tony’s death; old Cap!

I knew all of this was going to happen and expected to just enjoy the audience’s reaction, but I was swept up in the emotion of it all once again, spurred on by the collective emotions in the room of several hundred people. It was beautiful.

Unfortunately, not everyone can see a movie opening weekend. That’s okay, and definitely so in the case of Avengers: Endgame because I believe it’s still a profound experience on its own. Obviously you can’t see Endgame opening weekend anymore, and that in and of itself is slightly magical, too: that moment has come and gone, like magic as we popularly understand it today, ephemeral. We’ll be able to see the movie again (and we will, many times, both in theaters and on home video), but we’ll never again have the experience of saying goodbye to those characters, as a group, all around the world, for the first time. The Marvel Cinematic Universe has millions of fans (billions of dollars worth of fans), and, for that weekend, that universe was bound together in our love for it. At a time when divisiveness and anger and ugliness congeals and festers on the internet and seeps into pop culture spaces, spaces that should be about togetherness and celebration and joy, I am grateful for something that brought us all together–and on such a scale.

Star Wars: The Rise of Skywalker comes out in December, representing yet another conclusion of a beloved franchise. Will it affect audiences the same way? There’s only one way to find out: if you can, see it opening weekend.

Did Danny’s experience resonate with you? Have a theatrical experience you’d like to share? Or something you’d like to add to his observations on the joy of experiencing a movie like this in a packed theater during opening weekend? Let us know in the comments below!

Next post Skarsgard Discusses How Pennywise Has Changed In IT: CHAPTER TWO