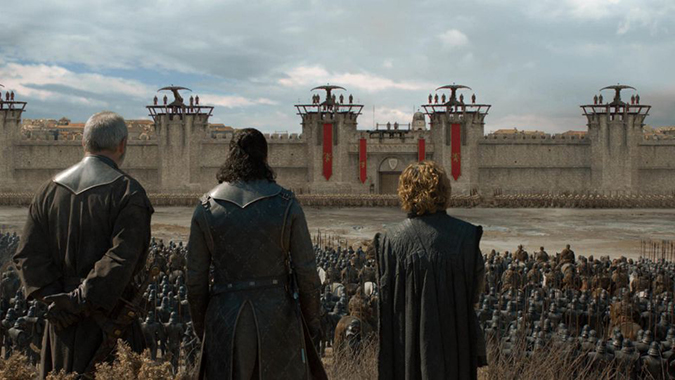 As a note, this review contains spoilers from the episode. Please watch and enjoy before diving in.

There’s a scene in Batman v Superman where Alfred struggles to describe the aftermath of a nuclear bomb detonating over the channel between Metropolis and Gotham, the sky awash in an eerie glow. That shock encompasses the way I felt watching Game of Thrones‘ penultimate episode, The Bells.

It’s also what makes it so difficult to assess. Literally, how the viewer perceives the final season—the show has a whole really—hinges on their reaction to the atrocities committed by Daenerys Targaryen (Emilia Clarke).

For weeks, I’ve sort of scoffed at the idea that they were building her up as the “Mad Queen” in my reviews, as well as on our companion podcast I Drink and He Knows Things. That’s not to say that the theory was without merit. There were signs throughout the show’s run, but ultimately, she seemed more likely to buck that fate. She understood the ills of her father, as well as her brother Viserys. To witness her backslide into that mind-altering paranoia was heartbreaking.

As agonizing as it was, though, the season’s slapdash handling of its acceleration did little to ease the contrivances that plagued it. As an example, Lord Varys (Conleth Hill)—perhaps the show’s most calculating character—only now realizes that she’s potentially a problem? This guy survived the insane whims of varied kings and queens for decades, yet here he’s outing himself with seemingly no care for the consequences?

The arc needed a little more time to simmer. Her final transformation was truncated. Logic dictates that the leap from executing opposing forces who refuse to bend the knee to eviscerating thousands of innocents in a field of dragon fire is simply implausible. Yes, she had moments where her anger eschewed better judgement, but this was outright genocide. For a second, reflect on how gradual and prolonged Stannis’ decline in sanity was. It’s not even comparable. She went from a five to an 11 in the span of two episodes.

That, sadly, is what I will remember most from this final season. Everything, even the most crucial plot points, were sped up to cater to its constraints. And her turn suffered for that. There was much nuance to be explored in her jealousy of Jon’s claim to the Throne, as well as the respect he received from those under his command.

Despite all that, I accepted her final descent into madness. She’d been backed into a corner. Betrayal had come to define her sphere of influence. Couple that with the tragic losses she’d suffered at Winterfell, Jorah, and at the sizable hands of the Mountain, Missandei, and she was a woman broken. That anguish is felt in not only her words, but in the sullen look she adorns for much of the episode. Do I think it could’ve been handled more gracefully? Of course. But it is what it is.

The visual wonder of The Bells certainly soothed some of those misgivings. It was an awe-inspiring spectacle, a flat out masterpiece of cinematography. Witnessing Drogon utterly dismantle and destroy Cersei’s (Lena Headey) forces simply felt epic.

In the end, this series wasn’t meant to have a neat and tidy conclusion. That was never more apparent than when Ramsay Bolton (Iwan Rheon), who’d maimed Theon for weeks, uttered, “If you think this has a happy ending, you haven’t been paying attention.”

We’ve known a difficult choice was coming. We had a general idea of what that choice would be, but things have become much more complicated. When Daenerys opted to reign through fear, torching the entirety of King’s Landing, she no doubt lost her strongest remaining ally from the North, Jon Snow (Kit Harrington), as well as her lone surviving consul, Tyrion Lannister (Peter Dinklage). Both of whose actions will undoubtedly brand them as traitors in her eyes.

What comes next may make this battle look mild by comparison. When she chose violence, the door to future terror was irrevocably opened.

Putting Daenerys to the side, there were other key moments in The Bells. One, delivered to the fullest. The other was sort of a shameful mismanagement of a character we’d all grown to love. For the first, I only require two words: Clegane Bowl! The mishandling of the second, the reuniting of Jamie (Nikolaj Coster-Waldau) and Cersei, speaks to the larger issues of the past few seasons.

Character growth matters. Jamie deserved better than to go running back to the person he’d witnessed become a monster, and Cersei deserved far worse than to be painted in a sympathetic light. And Jamie grew his hand back for Pete’s sake!

Now, it all comes down to this. One episode remains, and I just can’t shake the feeling that the fate of a certain few could be just as cruel as that of Brandon and Rickard Stark’s at the hand of the “Mad King” (2:40 in, but you may as well watch the whole thing). My advice to Jon: don’t demand a trial by combat. You’ll find your odds against the champion of House Targaryen to be slim.

I Drink and He Knows Things – Capt. Cash and I break down The Bells, the penultimate episode of Game of Thrones‘ final season and perhaps its most controversial one. We offer our overall impressions, pose lingering questions we may have, and speculate on what should be an absolutely bonkers finale.

Caution: This brief podcast is dark and full of spoilers.

Next post HONEY, I SHRUNK THE KIDS Is Reportedly Getting A Sequel Starring Josh Gad