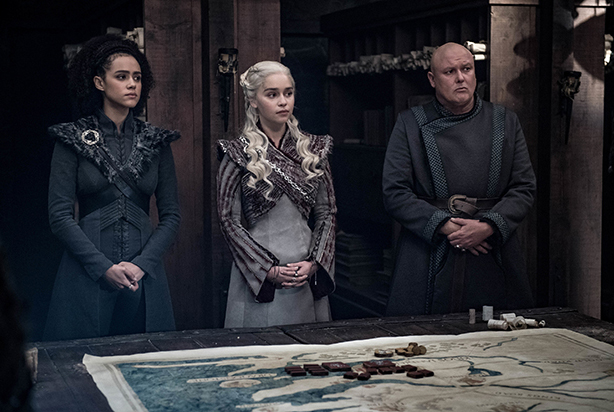 What was once a war on two fronts is now down to just one. By the end of The Long Night, the Night King had been felled, succumbing to the blade of Ayra Stark (Maisie Williams). Upon his demise, his army too was defeated, withering away like the decaying corpses they were meant to be. Such was the nature of his curse.

Thus, as The Last of the Starks began, there was much mourning to be done, but little time to do it. Theon Greyjoy (Alfie Allen) and Jorah Mormont (Iain Glen) lied among the countless dead. The goodbyes they were given were subtle, yet impactful. For Daenerys Targaryen (Emilia Clarke), Jorah had been a mainstay—a loyal companion that stopped at nothing to protect her. For Sansa Stark (Sophie Turner), Theon—the great betrayer of her family—had saved her from a life of misery and abuse, reconciling his misdeeds in the hopes of reclaiming the family he’d lost.

Those brief moments, along with the frivolity that followed their unlikely victory, were the high points of the episode. There were some truly great character beats strewn throughout the battle’s aftermath. From Tormund’s (Kristofer Hivju) alcohol-infused heartbreak to the Lannister brothers’ (Peter Dinklage and Nikolaj Coster-Waldau) good-natured ribbing of Brienne of Tarth (Gwendoline Christie), the collective weight that had been lifted could be felt in their joyousness.

Just as striking was Daenerys’ earnest plea to Jon Snow (Kit Harrington). I’ve often poked fun at her acting, but she nailed it. She’s been vulnerable before, but never more so than in the wake of Jon’s revelation.

Unfortunately, all that came after the army left Winterfell was a mishmash of odd behaviors and manufactured drama.

If you’ve been paying close attention to Game of Thrones’ final season, then one thing is clear: The writers desperately want you to believe that Daenerys may not be up to the task of presiding over the Seven Kingdoms. For all the nuance they put into those scenes of sorrow and exultation, they used almost none to bludgeon us over the head with this notion.

At this point, it’s coming at the detriment of the show. We know that at some juncture, a conversation will have to be had. Who is the rightful heir? We understand the answer, but it is not that simple, even if the show would like to portend that it is.

And that’s the underlying issue. The petty glances and squabbles that defined the uneasy air of the first couple of episodes won’t go away. But why can it not wait? The enemy now has never been more obvious. Cersei Lannister (Lena Headey) is the lone remaining target. No one—Daenerys, Jon, or otherwise—will claim the Iron Throne if she is not dealt with.

Having that knowledge is what made the actions of certain characters—Sansa and Lord Varys (Conleth Hill) in particular—so confounding. Instead of strategizing on how best to deal with her, characters reverted to their less desirable former selves or acted outright irrationally, plotting and scheming as if no lessons had been learned from the foibles that brought on mankind’s near eradication. It just comes across as absurd, and considering the circumstances, pointless.

All that aside, there were some monumental happenings—no matter how ham-fisted—in The Last of the Starks, including Cersei striking a balance-shifting blow to begin the final conflict. She—as the Night King before—has a single-minded focus. Her actions here proved that without a shadow of a doubt. She will not go quietly. And everything she does is done with malice.

Overall, the last two episodes have struggled in divergent ways. The Long Night traded intimate moments for mostly banal carnage, and The Last of the Starks mischaracterized—more so regressed—certain characters for the sake of inorganic theater.

When the season began, my hopes remained high—despite the pacing issues of Season 7—that the finale would prove worthy of this amazing journey. Yet after the jarringly abrupt and a bit unearned conclusion to the Night King’s sadistic quest and the writers’ odd approach to the Targaryen tumult, I’m not so sure that’s the case anymore.

I hope these last two episodes will dispel that uncertainty.

I Drink and He Knows Things – Capt. Cash and I break down the third and fourth episodes of Game of Thrones‘ final season, offering our overall impressions, posing lingering questions we may have, and speculating wildly on what little is left to come.

Caution: This brief podcast is dark and full of spoilers.

0
InEpisode 4, Final Season, Game of Thrones, Season 8, The Last of The Starks

One thought on “RTF Reviews The Final Season of GAME OF THRONES: ‘Episode 4’”