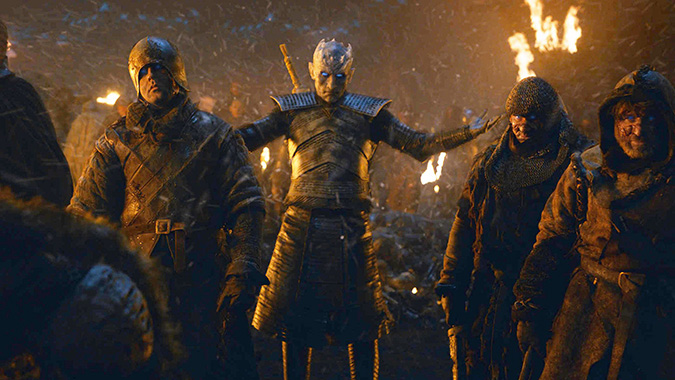 Episode 3—The Long Night—is a difficult episode to assess. On the one hand, it’s a bit of a visual mess, a muddled concoction of swords, doggedly determined White Walkers, and snow. On the other, that is how it was supposed to be.

The battle for Winterfell—like many of the other large scale conflicts we’ve seen on this show—was chaos personified; it should have been. This pitched fight was the true test of mankind; it was their lone chance to preserve their history, as well as their future.

Suffice to say, the scale of it did not disappoint. Thousands of men clashed with the undead in mass, struggling to beat back their relentless and seemingly endless assault; dragons raged across the clouds, engaging in aerial dogfights and erupting the barren landscapes of the North in an awe-inspiring flame; and the Night King reminded us all why his mysterious powers stacked the deck so high against the forces of man.

On paper, that sounds like a can’t miss hour of TV; yet I just can’t shake how disjointed it all felt. Scenes were cut too close, masking the intricacies of the combat and adding confusion to an already tumultuous scenario.

Many people die in this episode. Very few of those deaths are memorable. Often, they occur almost in passing. Worse, there are times you can’t even be sure whether someone made it or not because of the dismal lighting. That uncertainty robbed the episode of some of its weight.

That’s not to say that there were not moments of incredible heroism—Theon (Alfie Allen) and Jorah (Iain Glen) immediately come to mind; there were just too many more where important characters felt lost among the haze, another unidentifiable body in a field of the dead and the living.

In A Knight of the Seven Kingdoms, we were treated to this touching moment of reprieve, the calm before the inevitable storm. It was our chance to say goodbye to many of the characters we’d grown to love. I appreciated it then, but I do so much more now. There is a dearth of those tender moments in The Long Night. The bloodshed almost never stops.

Such is war. It’s anarchy; it’s bedlam; it’s that sense of hopelessness as death consumes the battlefield. Knowing that, it would seem odd to complain about how impersonal much of The Long Night felt, but this is a show carried by the strength of its characters. I hope this episode’s follow up allows us to properly digest the sheer amount we witnessed here.

Despite my gripes, The Long Night changes everything. The consequence of what unfolded throughout will be lasting, and it has set the course for what should be an epic and definitive conclusion to the “great game.”