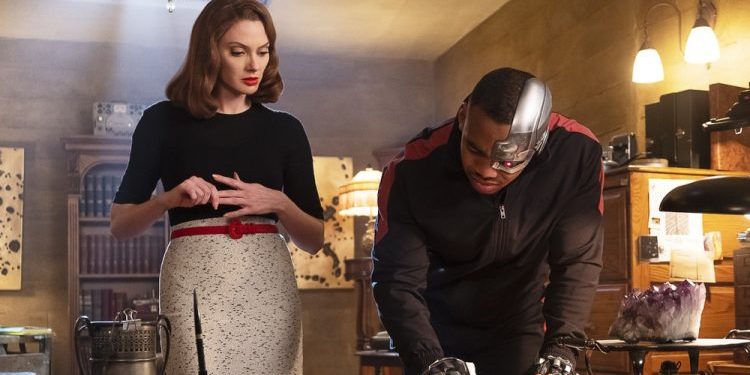 Vic and Rita find the mansion infiltrated by Ernest Franklin (Tommy Snider), a dangerous man called The Beard Hunter, who’s been activated by the Bureau of Normalcy to find Niles Caulder. Meanwhile, we learn the tragic love story between Caulder and an immortal woman named Slava (Pisay Pao) that started Niles on the path towards the man we know today.

Can I take back my rating of last week’s episode Jane Patrol? I enjoy the team aspect of episodes which is why I rated it a B, when I should have taken the show with a grain of salt. Hair Patrol happens over two time periods, one while Jane and Cliff are in Jane’s head, and the other in 1913, covering a bit of background on The Chief, Niles Caulder. Such a genius move to have this episode cover Rita and Vic’s time during the last episode.

Rita and Vic become greater partners in this episode. They truly work well together, and it has been fun to see their relationship grow over the season. Having this episode focus in on their relationship, while Jane Patrol focused on Cliff and Jane’s really worked because it allowed better character development individually, as well for the team. Partner relationships are the building blocks for better teams after all.

We learn more about The Chief in this episode, traveling back in time over a hundred years to learn about his beginning as an “agent of the oddities”. His interactions with the immortal woman make me think he was able to pull her power somehow. He looks the exact same in the flashback as he does in present day. There is no confirmation he is immortal, just some speculation at best. But it does seem this is the reason people keep looking for him, is the hope of immortality. This flashback proves just how much of a protector he truly is, backing away from people lest they be attacked.

This episode introduces the character with the weirdest superpower yet on this show: The Beard Hunter. There was a moment I wanted to puke, it’s absolutely disgusting his power. I really don’t want to see it again, but we’ll see him more in the upcoming episodes, so I’d better prepare.

What did you think of Hair Patrol? Did it better the last episode for you like it did for me? Let us know in the comments below, and stay tuned for more Doom Patrol news and reviews.