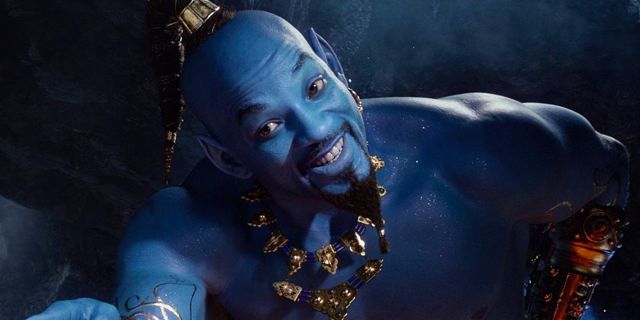 Next month, audiences will see Disney’s newest live action venture: Aladdin. Director Guy Ritchie cast Will Smith as the iconic Genie, voiced by Robin Williams in the classic animated adventure. As soon as images and footage started to get out there, the internet did what it does best, and mercilessly roasted the aesthetic of Smith’s Genie. But take heart, Will Smith fans, because all of that viral negativity did not leave the megawatt star feeling…blue.

Talking with Empire, Smith had a very healthy take on all of the criticism.

“It was very funny. There was a Sonic The Hedgehog / Genie frog. Everything is under such critical scrutiny. I came up in an era where there was no internet. It’s a new thing that I’m trying to get a handle on.”

Smith used to be the summer box office king. With films like Independence Day, and Men In Black, he was on top of the world. But the internet was in its infancy then, and nowhere near the machine it is now.

Ritchie was also surprised that he received something the internet hardly ever offers: an apology.

“It even came with apologies from the cynics who were so adamant initially. I’ve never seen apologies in that world. I thought, ‘Oh well, great, we’re back to where I’d hoped we’d be.’”

There are still naysayers when it comes to the look of the film. Some of that comes from people not being fans of Ritchie in general. Others still don’t like Smith’s take because Williams version is so ingrained in their psyche, that another version could never permeate into an acceptable area.

I like the look of the film. It is exactly what a live-action Agrabah would look like. Genie in the animated version did take human form a lot, but he stayed blue, and just added legs and feet. This more “grounded” version will have Genie be blue in Genie form, and regular human skin color in human form. Makes sense to me.

Previous post Keanu Reeves Is Down For JOHN WICK 4 (And Beyond?)