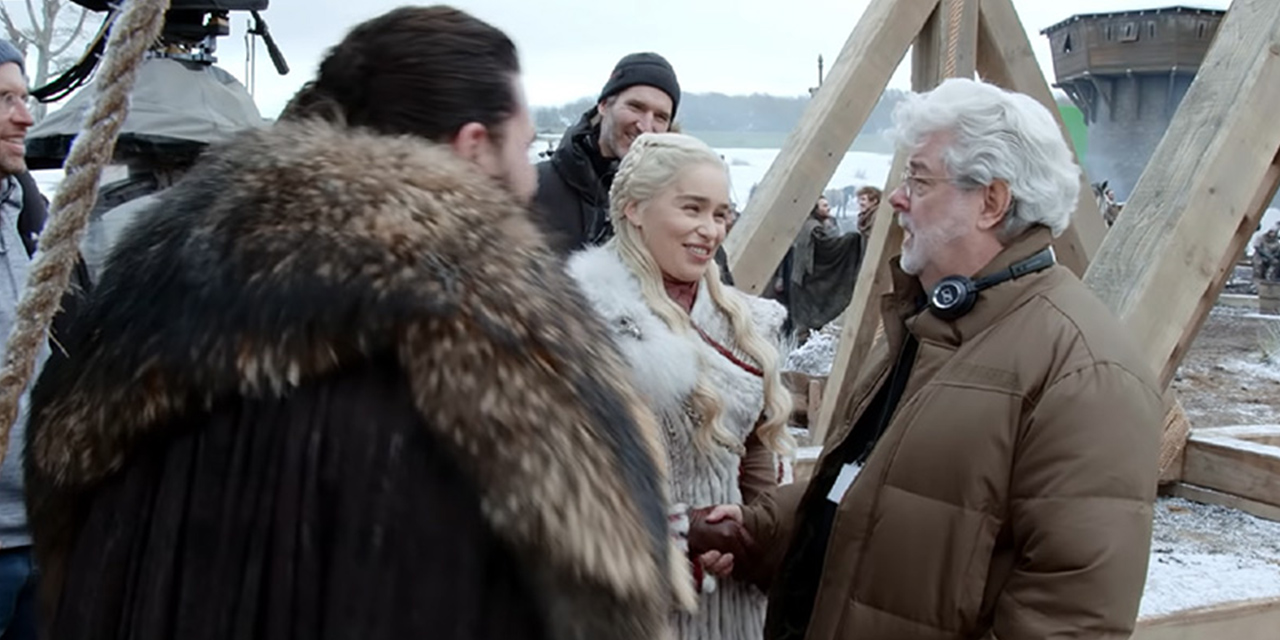 Looks like Game of Thrones got a little help from a galaxy far, far away! A behind the scenes look at the first episode of the eighth season of the HBO series shows Star Wars and Indiana Jones creator George Lucas visited the set and even helped direct a scene of the show.

“When we found out George Lucas wanted to visit, we thought maybe it was a practical joke, We were really excited and also nervous because it’s George Lucas.”

In the clip, Lucas is standing alongside the episode’s director David Nutter who is clearly excited to be working alongside a legendary film maker like Lucas.

Lucas is then seen directing Emilia Clarke and Kit Harrington. “That was great” he says to Harrington before joking “No direction for you. I don’t really care about you. I don’t care what happens to you.” Ouch!

George Lucas has been more active than ever since his retirement in 2013. Aside from his set visits, Star Wars: The Rise of Skywalker director J.J. Abrams has revealed he consulted with Lucas for the final film in the saga he created 42 years ago.

Of course, this isn’t the first time the worlds of Game of Thrones and Star Wars have intersected. Game of Thrones star Gwendoline Christie played  the ill-fated Captain Phasma in The Force Awakens and The Last Jedi. Clarke played Qi’ra in Solo, a character whose interesting arc we likely won’t be seeing completed any time soon.

Benioff and his GOT co-creator D.B. Weiss are set to create their own trilogy of Star Wars films in the near future. Rumors have circulated the trilogy will be based on Knights of the Old Republic series of books and video games. LucasFilm president Kathleen Kennedy has confirmed Knights is being looked at for development for television and film. Whatever their plans are, we won’t be seeing it for a while.

Stay tuned for all the latest on Game of Thrones and Star Wars right here on Revenge of the Fans!