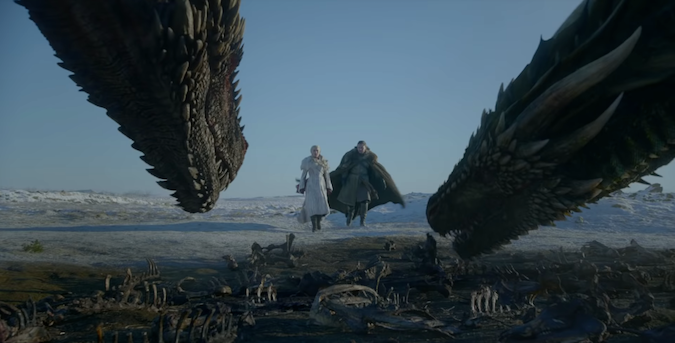 The Band is Back Together

By Thomas L. Kelly (@WriterTLK)
As a note, these reviews will inevitably contain spoilers, however mild, from the episode. Please watch and enjoy each episode before diving in.

It’s been nearly two years since we were last embroiled in the rising conflict of Westeros. It was a long wait—a quite unbearable one, to be frank.

As Season 7 ended, the Night King and his army of the undead were on the march. They’d resurrected Viserion (Daenerys’ poor dragon that the Night King hurled his magical ice javelin through) and blew the pesky Wall to smithereens.

Stuff was getting real. The war was coming. It was a far cry from where we were in Season 1—when everything was so much simpler. Greed, a hunger for power, is what drove the backstabbing and politicking then. They were naive. Now, the luxury of naivety is as long gone as the fabled Wall.

Accordingly, much of the final season’s premiere is dedicated to connecting the threads from Season 7—what is Cersei’s (Lena Headey) conniving, crazy butt up to, has Theon (Alfie Allen) truly found himself again, and what of Jaime (Nikolaj Coster-Waldau), the Ronin of this tale?

What those questions amount to, mostly, is a series of long-awaited reunions and check-ins. It’s setting the table. Knowing that may sound discouraging, but it just had to be done. We knew Cersei was planning on double crossing the armies of the North, but what we see here cements that.

Her bit of narrative is predictable, but necessary. All of what we get here is. It can be easy to forget how sprawling this tale has grown. Yet this season is where it all must come to a head. We can no longer afford to kick the can down the road on threads that need tending.

Thus, in the North, Jon Snow (Kit Harrington) has returned with a sizable army in tow. As this episode often reminds us, the North is a stubborn place. Jon may have bent the knee to Daenerys (Emilia Clarke), but he was their chosen king. They’re not ready to dedicate allegiance to someone else. They, like Sansa (Sophie Turner), are skeptical of the Targaryen queen.

The North is the bulk of the episode, so it’s no coincidence that it is also the geographical area that contains the majority of the characters who have been on disparate paths—Ayra (Maisie Williams), the Hound (Rory McCann), Samwell Tarly (John Bradley), Sir Davos (Liam Cunningham), the list goes on.

There is much work to be done here, and the actions/revelations of Season 7—Jon being the rightful heir to the throne, for one—could prove to have lasting consequences as we move forward.

As for Theon, who’d been a man broken for much of the past few seasons, we come to discover whether his moment of awakening at the end of Season 7 would truly be transformational.

Finally, at the Wall (or what was once the Wall), worst fears are confirmed. Having seen the ice dragon flapping its wings in the general direction of Winterfell, this seemed a little superfluous, but it worked nonetheless. And with only six episodes in the season, it’s just reiterating the point that conflict is closer than any of our favorite unsuspecting characters could’ve possibly expected.

The timeline for resolution has been hastened, leaving us with a lot to digest. Despite that, though, it was an episode driven by the people we’ve come to love. The brief exchanges between characters who have gone dozens of episodes between seeing each other—never knowing whether the other was alive or dead—was gratifying in itself.

The sheer scale and scope of what has led us to this point comes to bear in those moments. If you’ve been on this ride since the beginning, it’s difficult not to find yourself reminiscing on the vast history of these characters and what is at stake for them. There is a moment with Jaime toward the end of the episode that does more with no dialogue than other seasons of this show have ever done. There is such a tremendous weight to it.

All that said, the central question remains: Will the people of Westeros be able to stop infighting long enough to stave off the Night King and his legions? I don’t get the sense they well, at least not initially. And the untrustworthy glances and exchanges that this episode is rife with speak to that notion. So stay tuned, there’s plenty of season yet to come.

For the final season of Game of Thrones, I will be reviewing each episode as we go along for Revenge of the Fans. If you’d like to offer any feedback as the season goes on, please feel free to contact me on twitter.

Next post Kathleen Kennedy Talks About The Future Of STAR WARS