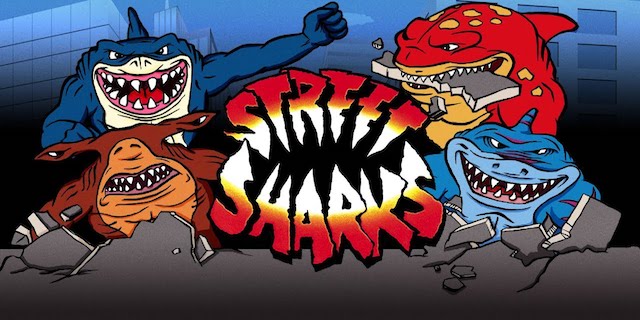 Maybe not so popular with those born in the 2000s but for the 90s babies especially, one might remember the awesome cartoon Street Sharks. Well, digital artists have.  George Evangelista recently posted an image on his Instagram of one of the four Street Sharks and how he would look in live action.

The image is of Big Slammu (Whale Shark) and is the youngest but strongest of the four brothers in the series.  His other brothers included Ripster (the Great White and pictured below), Jab (Hammer Head) and Strexx (Tiger Shark).  For those that are not familiar with the series see below for a quick synopsis:

“A group of teens turned into mutant sharks on rollerblades, who battle the evil Dr. Paradigm and protect the Earth. Especially Fission City. Each member is a different kind of shark, and has their own special abilities. Joining them is Blades, techno-genius kid, Moby Lick, and Roxie the chick.”

To be honest, I only know a little about this show as I was really into TMNT during this time but there was a few requests for this one. So here is Ripster from Street Sharks. Don’t worry I’m consistently looking into the comments for the suggestions and will try to get as much as I can. #streetsharks #sharkweek #greatwhiteshark #90scartoon #anthropomorphic #anthro #mutants #ripster

I know that it might seem silly or like a Teenage Mutant Ninja Turtles rip off but I assure you it is not (okay maybe a little), but it still was a very interesting cartoon to say the least.  Although only lasting 40 episodes, it was part of that marathon of cartoons you could watch as a kid early morning on a Saturday.  We are in a current state of film where in just about a month or two we will be getting a live action Pikachu.  So, why not a live action teenage man shark?  Transformers, TMNT and Scooby Doo all have received the live action treatment and I do believe some day (hopefully soon) Street Sharks will get theirs’.  Personally, I would enjoy seeing a live action Street Shark movie cross over with a TMNT movie.  Sharks and Turtles along with a wise rat who is also a karate master.  Easy sell!

What would you think of a live action Street Sharks movie?

CONTINUE READING: “RTF Original: ‘This Painting Celebrating The 80th Anniversary of BATMAN Is A Must-See!’“