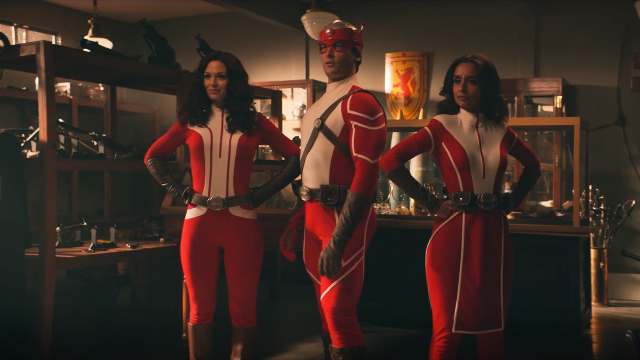 Following a clue left by Mr. Nobody, Jane, Larry and Rita visit a school where Niles’ previous team of heroes, the original Doom Patrol has retired. Meanwhile, Cliff and Vic tenuously bond over their mutual “father issues.”

This episode was definitely more on the serious side, and there’s some things I find intriguing that are spoiler related, but they’ll be at the end of the review. So read to the picture for the non-spoiler review!

Rita’s really taken the last two episodes by the bull horns and ridden them. We’ve learned a lot about her character, and why she is the way that she is, but she’s also grown out of the selfish shell she’s lived in for quite awhile. We take more of a detour with Rita, Jane and Larry in order to learn about the original Doom Patrol, and it makes decent sense. It’s a slower, more serious episode and on that note it struggles. We do learn why Jane was told to find the original Doom Patrol however, so that’s a plus, and it furthers the overall season’s plot that way.

The side journey between Cyborg and Robot Man is interesting. Maybe they’re starting to like each other now? At least tolerate one another while they’re split off from the team. Speaking of which, a point of argument for me in every show with a team involved as the main subject. This is a show about a team, and splitting the team can derail that aspect. It does in this episode. I hope we see the team together more in future episodes.

Agree? Disagree? Have a comment? Let us know in the comments below! Beware of spoilers below this point, and see yall next week for episode seven of Doom Patrol!

So at the beginning of the episode we have Rita Farr in the 1950s trying to get a job. She’s an actress, and she’s struggling to find work after the way she’s treated other people. She tries going, and talking to an old producer friend, and he tells her she needs a miracle to find work. But then he pats on his lap and beckons her to sit down on it. She grimaces while she does, and they proceed to kiss, and she feels grossed out, and kills him.

I feel conflicted in this couple of minutes. I’m happy she doesn’t intend to exactly sleep with him. But I also feel like this was weird, especially with the current tensions about the same situation with Kevin Tsujihara. I also don’t feel as if this was a moment of growth for Rita, killing the man. She experiences growth later on in the episode, but this moment, doesn’t really do her any good.

[Editor’s Note From MFR: “I haven’t seen the episode yet, but based on how you’re describing it, perhaps they did that to show a ‘low point’ for her to bounce back from? To demonstrate where she’s at in order to make her growth and eventual triumph as a character feel more triumphant? Would love to see what our readers think about this.]

What do you think? Was this part of the episode needed? Why do you think so? I’d love to hear about it, so let me know in the comments below, or on Twitter, @kgilstrap13.