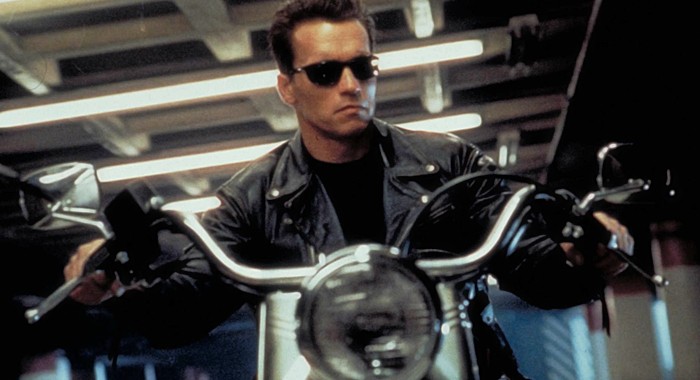 Let’s present a theoretical situation: If I was tasked with the insurmountable—storming the gates of hell, fighting off human/dinosaur hybrids armed to the teeth with lasers and a various assortment of machine guns, an impending zombie apocalypse, corrupt drug cartels, a gaggle of sneaky and highly trained backstabbing ex-partners, flying sharks, an alien who can cloak and shit acid, or worse, a classroom full of obnoxious children with no filter—who would be the five guys I’d choose to follow me blindly?

There could be no questions or complaints, only well-timed one-liners and quips. Oh, and lest I forget, one industrial sized can of, to quote the great “Stone Cold” Steve Austin, “Whoop A$$!”

If you listened to the Hops and Box Office Flops Last Action Hero podcast, then one thing is clear: I love Arnold Schwarzenegger; and this incredibly dangerous and difficult mission is not fit for any average action hero.

I can’t simply look to John McClane to tackle this. He’s a survivalist. Perhaps older McClane would fit the bill, but he’s disqualified on the failures of the fifth movie alone.

I can’t go to Rambo. How could I? The guy’s an emotional wreck and his hands have grown so large that I’m afraid he could no longer grip a gun.

I could look to the newer generation, but those stars are too green behind the gills and grandiose displays of martial arts could not win this day.

There’s always old Chuck, whose tears cure cancer and whose mere presence spooked whatever life there was to be found on Mars, but he spent the better part of a decade round house kicking in slow motion. He’s rusty, too rusty, and as such, he can’t be trusted with a mission of such magnitude.

Oddly enough, there is only one man—well, five really—but one who’s played all the necessary parts to ensure that the world is not engulfed in fire, brimstone, or flame—just guts, the guts of those foolish enough to trifle with the Arnold Action All-Stars. These are the five guys who’ve kicked more ass and taken more names than the entire Avengers crew did as they saved Clevelan … I mean, New York from the clutches of a petulant half-brother riding Serpentor’s rascal.

1. John Matrix: It’s only fitting that I mention him first, as he’s the captain of our squad and the single toughest one man killing machine to ever grace cinema screens. Come on, the guy stormed a dictator’s compound and promptly laid waste to a few hundred people. Did I mention he’s extremely resourceful? No?

Well, imagine the dinos were bearing down on us and bullets were low. Odds are good Matrix could use anything around us to up his kill count. He tosses a saw razor as well as a frisbee, jumps off planes about to take off, eats green berets for breakfast, and can knife fight one-handed against fat Freddy Mercury in chain mail. It’s a no brainer.

2. The Terminator: Sure, it seems unfair to have a machine from the future on our team; but it’s my team, and this is the proverbial fate of the world we’re talking. The T-800 is a perfect fit as the assistant captain of our squad. He asks no questions, he follows your every command, unless he was sent to kill you, and he doesn’t stop—ever.

The Terminator ain’t got time to bleed because he doesn’t actually bleed. It’s not his blood, so no matter how high the chips seemed to be stacked against us, he’d be there. This guy roasted a whole station of cops dual wielding assault weapons for crying out loud. Not quippy enough? How dare you! T-800 walked deadpan into a male revue and told the bouncer to, “Talk to the hand!” The strength of his insistence alone warrants his selection—especially if we found ourselves short of clothes, boots or a motorcycle.

3. Harry Tasker: Ah, the sage veteran of the squad. He’s been around the block and then some. Doesn’t hurt that he did it all despite the severe lack of athleticism displayed from his primary backup, Tom Arnold. Tasker took down an entire terrorist cell by himself in a week and shot Evil Larry from the Three Stooges off a missile. Hell, he’ll even describe to you how he’s going to kill everyone in the room before he does it.

I think I’d be remiss if I didn’t mention that he did all this while raising a holy hell of a daughter and dealing with Bill Paxson—a man our prior character already busted up (some people just never learn). All that said, Tasker’s most valuable contribution: covert ops. Everyone knows dinosaurs, demons, and the undead love to tango, but bad news, boys … so does Tasker!

4. Dutch: You didn’t think I’d forget him, did you? Dutch is primed for these situations. He’s battled the unknown, and he’s handled a team of misfit badasses. He’s also our greatest example of championship resolve.

When they were dropped into that jungle, it seemed to be a walk in the park—pick up a truck, kill some guerillas, grab some intel. Done and done, right?

Well, things weren’t that simple. As the Predator eviscerated Dutch’s team, it became clear they were no longer the odds on favorite. Did he pack it up? Did he take the easy way out? No! He followed the advice of the Rocky 4 soundtrack, “There’s no easy way out … There’s no shortcut home!” He caked himself in mud, built booby traps, and howled into the night. He threw hands with a nine foot tall alien and had the stones to comment on its severe need of a makeover. When that didn’t work, he dropped a log on its head. Thanks for coming out! Next time, try easier prey. Oh wait, it did … Bill Paxson! As I said, “Some people never learn.”

5. Conan: The wildcard—a man who cut his teeth in the slave pits fighting to the death. Conan bested a horde of James Earl Jones’ finest men in a clash of swords with little to no resistance. For those of you who don’t know, old James Earl is quite the swordsman himself—one particularly adept with laser swords.

I know, I know. He doesn’t use guns. He’d be rendered ineffective by the very nature of this battle. Well, the battle isn’t technically real and Conan takes no shit, not even from camels. He’s an excellent horseman, his kill count may even trump Matrix’s, and he was doomed to watch his parents die as a child. His tortured past gives him virtually nothing to lose; combine that with his willingness to fight anything and everything and he’s clearly a guy you can depend on.

Giant snakes? Not an issue. Weird horned monsters? No problem. Demons who hang out in a creepy hall full of mirrors can’t even escape his blade. Hey Wilt, “I heard you once scored a hundred points in a game. Why don’t you try it when I snap you at the knees!” For crying out loud, his creed about what’s best in life would be written on our flag.

As you reflect on this, I want you to remember one thing: We’re really just one day, even one hour, away from a potential laser-wielding human/dinosaur hybrid hostile takeover. Right now, they could be plotting and scheming or even drawing up diagrams on how to best equip the limp-wristed T-Rex with a weapon. We don’t have that issue. You know why? Because Arnold’s arms, no matter which character, are never puny.

So bring on the dinosaurs, the sharks, the creatures from the off-colored lagoon, or even an army of Oprahs who play their greatest hits on loop. The Arnold Action All-Stars will be there to kick ass and take names. Oh, and forget about the gum because they never had any to begin with.

Previous post Marvel To Make A ‘WHAT IF?’ Animated Series For Disney+