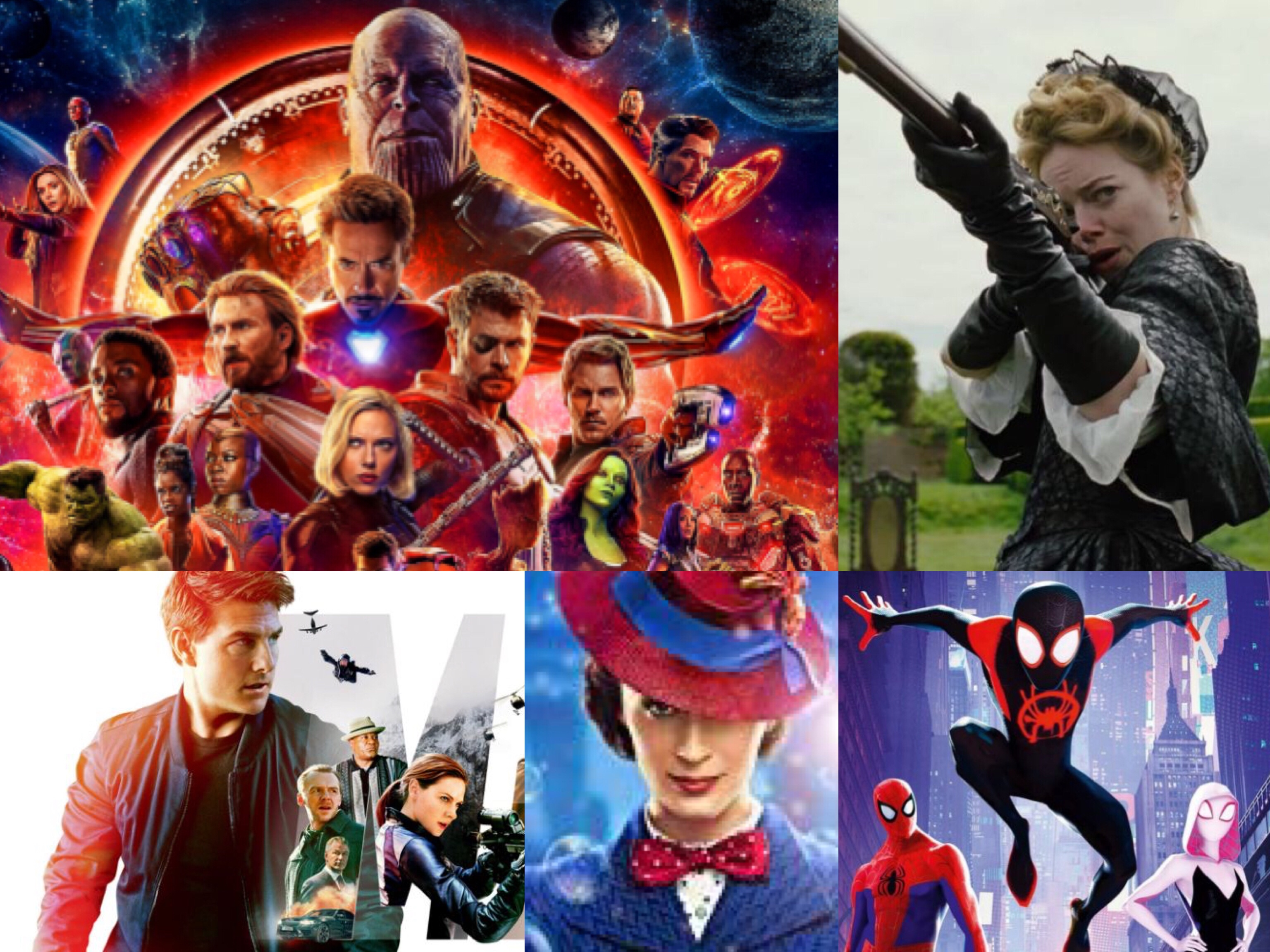 And here it is. My favorites of the year. The films that moved me, tickled me and thrilled me in 2018.

I want to switch it up for this list and start by acknowledging a little gem that I think when unrecognized as a great offering.

Blake Lively and Anna Kendrick shine in this dark comedy about two unlikely friends that quickly delves into a dark, sordid tale worthy of Gillian Flynn, but one that doesn’t sacrifice Feig’s excellent comedic instincts. The plot is engaging and Feig handles the necessary tonal shifts with ease, but the real draw are out two leads, both delivering performances that show off their respective strengths, yet plays against expectation. Give this one a watch if you slept on it last year.

This delightful follow up that arrived 54 years after the original Mary Poppins is everything fans wanted and more. The story is simple yet sweet, the music is wonderful and the cast is practically perfect in every way. Lin Manuel Miranda is magnificent as lamplighter Jack and is responsible for my favorite number in, quite frankly, either Mary Poppins film, but Emily Blunt is the star that shines brightest. She more than lives up Julie Andrews, while also never resorting to mere imitation. Meryl Streep, Emily Mortimer and Ben Whishaw also shine in supporting roles, and the music will have you leaving the theater flying high as a kite. Supercalifragilisticexpalidocious indeed.

In an age where every horror classic is getting a remake or reboot, I hope they take the care to make them as spellbinding and hauntingly beautiful as this one. Dakota Johnson shines in a role that works as both a blank canvas to project unto but a three-dimensional character that gives true emotional power to the narrative. Tilda Swinton is simply majestic in not one but three roles in this film. It’s a film with great heart, that does not skimp on the ghoulish atmosphere or the scares.

This is yet another remake that should be featured in any curriculum on how to do remakes correctly. The basic structure is the same as the previous incarnations, but it’s turned into a love story that blends melodrama and realism in a truly beautiful way. While it is guilty of certain tropes, it mines those tropes in a human way that not only makes the story plausible but heartbreakingly real. Lady Gaga shines and Bradley Cooper has been criminally underrated for his work on this film not only as actor but as director. The music is wonderful, and all have the sound of something that would plausible as hit songs on the radio. The movie also surprises with touching turns by the likes of Andrew Dice Clay and Dave Chappelle. A truly marvelous powerhouse.

It’s Shakespeare meets “Mean Girls”. And I mean that in the best possible way. This film is a technical marvel, making all kinds of choices that would sink a film in the hands if a lesser filmmaker, such as fish-eye lenswork and natural lighting, but the result is lavish and ostentatious with an appropriate amount of grit. But all this is secondary to the powerhouse performances and chemistry of the three lead actors Emma Stone, Rachel Weisz and of course, Olivia Colman. Their chemistry sizzles the screen so much you could fry bacon on the negative. It’s the crazy, sexy, cool of historical drama.

Alfonso Cuaron’s newest film may be his best. Set in 1970’s Mexico, on the backdrop of political tensions that erupted in the Corpus Christi Massacre of 1971, it tells the story of Cleo, an indigenous live-in maid to an upper middle class family in Mexico City. The film is simply beautiful, exploring the dynamic within the classist structure of Mexican society. It’s especially poignant given the tumultuous political times we live in, where questions of class, race and privilege permeate our culture. And yet, life moves on. It must. Yalitza Aparicio is a revelation and grounds the movie in honest emotion. It’s on Netflix, but if you can watch it in 70mm film I highly recommend it.

Wakanda Forever baby! This movie is more than just a superhero movie. It’s a royal epic worthy of Shakespeare. The movie asks difficult questions about the responsibility of power, about sins of our fathers, and how we reconcile our past to forge a better future. It introduces one of the best villains in the MCU canon in Erik Killmonger, a character whose methiods are violent and cruel, yet with an empathic viewpoint that ultimately changes our hero for the better. The production design is also spectacular, delving deep into Afro-futurism that brings a whole new look and feel to Sci-fi. It’s the first superhero movie ever to be nominated for Best Picture, and it’s not at all difficult to see why.

The hunter becomes the hunted in this excellent reboot/ sequel to the 1978 classic slasher. Jamie Lee Curtis brings new shades to an older, wiser and angrier Laurie Strode, now 40 years removed from that traumatic Halloween night in 1978. Judy Greer and Andi Matichak shine as Laurie’s daughter and granddaughter respectively, rounding out the films portrayal on the generational effect of that trauma. Michael Myers is back after 40 years in captivity and he in rare form, menacing as always. The film is every bit as atmospheric and tense as John Carpenter’s original, with a dramatic and thematic heft that none of the sequels have brought into the franchise before. It’s a triumph of horror, survival and character study.

3) Spider-Man: Into The Spider-Verse-

Miles Morales get his due in this spectacular animated offering. After Peter Parker dies, Miles takes up the mantle of Spider-Man, and he’s joined by none other than Spider-Gwen, Spider-Man Noir, Spider-Ham, Peni Parker and …. Peter Parker? All of them come together from different corners of the multi-verse to stop Kingpin from destroying reality itself. This film is a feat in every possible facet, with an incredible ensemble that includes the likes of Shameik Moore, Mahershala Ali, Hailee Steinfeld and Jake Johnson. The real triumph of this film is the animation, with a perfect blend of hand drawn, CGI and the kinetic energy of comic book storytelling. It’s a classic mentor story that transcends not just superhero cinema, but animation itself to create a thrilling adventure that delights more and more with multiple viewings.

This franchise has really stepped up it’s game since M:I3 dropped in 2006. While it still needed some work, it paved the road for the rest of the franchise, and perfected in Ghost Protocol and Rogue Nation. Christopher McQuarrie and Tom Cruise team up once again to bring us the absolute best film in the franchise. I cannot remember the last time my jaw dropped from the sheer audacity of the stunt work and action sequences. It’s paced perfectly, it has some real emotional heft for fans of the franchise and the action sequences are some of the most thrilling ever put to film. It’s a technical wonder and has everything you could want from a spy thriller. It’s a mission I was more than happy to accept.

This was the big enchilada for me. This was everything I dreamed that a giant comic book extravaganza would be, a dream I’ve had ever since reading “Infinity Gauntlet” at the ripe age of 12. Our heroes have their moments to shine, but no one shines brighter in this movie than Thanos. This is his movie, and Josh Brolin executes his performance with precision. He has presence, yet refrains from the typical scenery chewing that is in keeping with his kind of villain. We challenged Marvel to give us a truly great villain, and Thanos is basically their “hold my beer” moment. And that ending. MY GOD that ending. It’s the perfect crescendo to 10 years of storytelling that amps up the anticipation for the upcoming conclusion when Avengers: Endgame arrives this April.

There you have it! Hopefully 2019 will be just as full of wonderful offerings in cinema as 2018. But until then, we’ll be here! Same Bat-time, Same Bat-Channel!

Next post Box Office: Audiences Found HOW TO TRAIN YOUR DRAGON: THE HIDDEN WORLD!