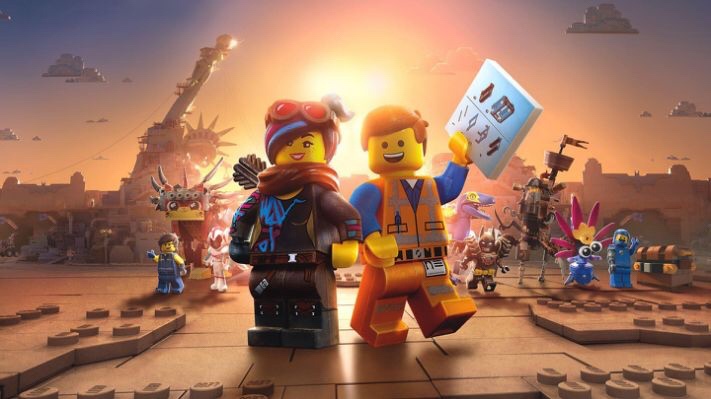 It has been five years, and everything is no longer awesome. Bricksburg has fallen into disarray and become Apocalypburg, a barren Mad-Max type wasteland where only the toughest survive. If ever there was an apt metaphor for a tween growing out of his childhood, yet still on the cusp of the true angst of teenage-hood, this is it.

When The LEGO Movie premiered in 2014, everyone expected an overtly-corporate product that would be an hour-and-change-long commercial for the popular toy. No one expected a clever, witty and heartfelt meditation on childhood and the need to connect with their parent. So it stands to reason that conceit would carry on to it’s long anticipated direct sequel.

If the film has a drawback is that the meta nature of the storytelling is not as fresh and at times runs the risk of disengaging you from the story. Luckily, the sheer charm of the characters and snap-crackle-pop feel of the humor always keeps you on the right path. It also helps that live action scenes are interspersed throughout the narrative and add emotional clarity to the film’s plot.

Most of the gang from the first film is back in full force, including Nick Offerman, Alison Brie, Elizabeth Banks and, of course, Chris Pratt as the ever cheerful Emmett Brickowski. The cast is rounded out by the wonderful addition of Tiffany Haddish as Queen Whatevra Wan’abi, who slays as not just the antagonist but also the love interest for the erstwhile bachelor, Batman (Will Arnett). While Pratt shines once again as not just Emmett, but also as new character Rex Dangervest, the MVP of this movie is Elizabeth Banks as Wyldstyle. Her character shines more so than the first film, serving as a conduit for the driving emotional them of the film (which I’d rather not spoil here).

The film is not quite as good as the first, but on it’s own merits it’s a real treat. It’s laugh out loud funny and has a huge heart. If they’re all as good as this one, keep these movies coming!

0
InChris Pratt, Lego, The LEGO Movie 2: The Second One

Previous post Netflix Renews THE HAUNTING OF HILL HOUSE For 2nd Season, Will Be An Anthology