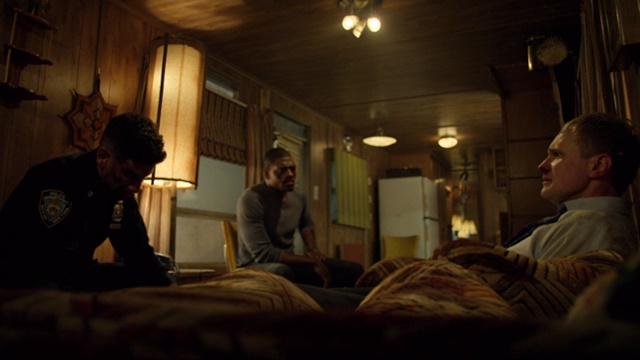 By the end of The Abyss, Frank had made it out of the hospital. Well, sort of. When we last saw him, he was in the custody of Detective Brett Mahoney, who’d had just about enough of Frank and wasn’t going to allow him to slip through his fingers.

The build to that moment—the one where he and Frank drive off together in an ambulance—had been a slow one. The Abyss, as I covered in its review, was a table setter—the calm before the storm. Collision Course and The Whirlwind are aptly titled. Before the opening credits even roll in the penultimate episode, we’re back to the mayhem that defined so much of the season.

Pilgrim is in pursuit. Though it’s clear he understands that the Schultz family only values him for his adeptness at violence, there is too much at stake for him not to fulfill his mission. His high speed pursuit is just one of the many cogs that sets the wheels for the finale in motion.

And it is the conflict between he and Frank that pays off the most. From shootouts to fisticuffs, their confrontation delivers.

As for Billy, that satisfying conclusion that had been teased throughout the season never really comes to fruition. The show subverts our expectations on that end. And contrary to how I perceived Billy during The Abyss, he is satisfied (?) with a simpler life. He’s ready to commit to Dr. Nutbar (Floriana Lima’s Krista Dumont) and leave Frank in the past, which was not at all how I read it. On a side note, Dumont, who’d obviously had some issues, goes full Glenn Close from Fatal Attraction here.

Frank does get a moment with Billy, but it’s a blip. Madani assumes the more central role in that arc. To be fair, her problems throughout this season have also heavily revolved around the trauma Billy had caused her. That being said, by the end of The Dark Hearts of Men, the certainty that either Frank or Billy would die at the hand of the other is absolute. The way it happens didn’t serve that well. It felt anticlimactic.

Billy’s whole change of heart was just such a stark shift from the masked gangster they’d been building toward. It was like we were on the cusp of him truly evolving into the Jigsaw just to have it snatched away. A bummer.

I spent much of these reviews avoiding spoilers whenever I could, and I will continue that trend here. What I will say is that the show does an excellent job of wrapping up all its other disparate threads in these two episodes.

As I mentioned before, the Pilgrim/Frank showdown lives up to the hype on a number of levels. And amidst all its tumultuous violence, it still finds a way to humanize the two of them. Of course, when it comes to Pilgrim, you’ve also got Anderson Schultz. Frank’s lone scene with Corbin Bernsen is as close to a perfect representation of the character as you’re going to get.

Amy, who I haven’t been keen on, got to me a little by the end. It was bitter sweet seeing her and Frank’s journey come to a close. Enough so, that I was able to forgive some of her more moronic actions in the twelfth episode.

Sadly, knowing the show had been cancelled hammered home that finality. Barring some negotiating wizardry, this may be our last rodeo with this cast. Frankly—pardon the pun—that feels like some crude form of punishment.

Composite Score: 8.0 — It loses points for neutering Billy right at the end.

Overall Season Score (averaged from all the reviews): 8.2