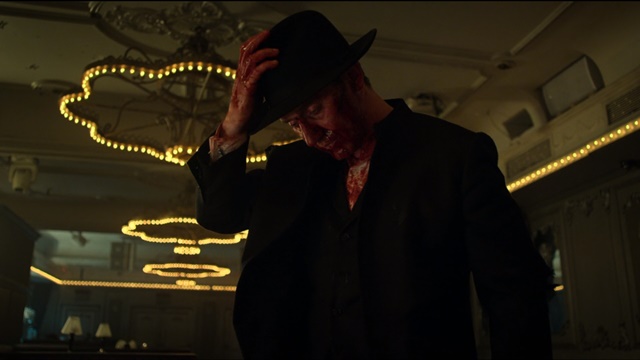 Episode 10: The Dark Hearts of Men

Flustercluck was an excellent episode. It pushed each of the characters the season’s been juggling into suspensful scenarios. Against the odds, The Dark Hearts of Men is even better. It’s brutal, uncompromising, and as it ends, few of the central players are not worse off than they were before.

In my review for Flustercluck, I noted that Pilgrim (Josh Stewart) deserved better than Anderson Schultz (Corbin Bernsen). He’s a man that desperately wants to bury the demons of his past, but can’t because of the nasty deeds that are required of him. It was clear that following Schultz’s orders would come at a cost. It did, and it was a heavy one. Pilgrim’s old crew believed they were owed a penance, and they wanted their pound of flesh.

In any other episode, the barbarism displayed in Pilgrim’s desperate fight to survive would’ve been unmatched. In The Darks Hearts of Men, though, it’s just one strike in a salvo. And as pulse-pounding as that scene is, it’s the ramifications of it that are truly effecting. When we last see Pilgrim, he’s a man broken.

As for Frank, he’s tracked down Billy. Their confrontation here is inevitable; really, it has always been. Frank should’ve finished him at the carousel. He grasps that. Billy, despite having discovered the fault for his pain lies with himself, is just as determined to not allow that to happen. He’s almost worse after Madani hits him with that cold truth. He doesn’t have remorse for what he did to Frank’s family. He just wants to break Frank the same way Frank broke  him. It’s a single-minded focus, frighteningly so.

And that’s the brilliance of the episode. Frank is not the one dictating the terms, as he has been for much of the season. Why is that? Well, think back. At the end of my review for Flustercluck, I mentioned that Madani (Amber Rose Revah) had gone to the apartment of psychiatrist Krista Dumont (Floriana Lima). Their conversation, which takes place roughly 24 hours prior to Frank’s infiltration of Billy’s compound sets the table for everything to come.

Frank, like Pilgrim, is not the same by episode’s end. Neither, for that matter, is Curtis (Jason R. Moore). In helping Frank, he sacrifices not only his personal life, but he also compromises his life’s mission. You may not feel bad for Frank—a man who’s done more than his fair share of killing—but you’d be hard pressed not to empathize with Pilgrim and Curtis after The Dark Hearts of Men.

With only three episodes to go, the stakes have never been higher. If even two can attain the heights of Flustercluck and The Dark Hearts of Men, then it’s not an overstatement to say that this is the best season of a Marvel Netflix show we’ve had yet. Makes it that much more tragic that it could be the last for Mr. Castle and company.