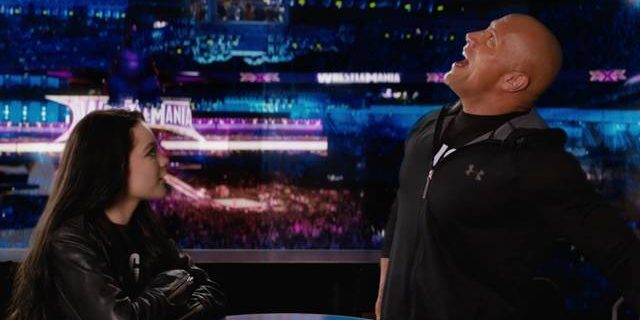 Heading into the theater for Fighting With My Family, something dawned on me: This would mark the first time I got to experience a movie that speaks to both sides of my geekdom at the same time since 2008’s The Wrestler.

See, while I may be best known to our followers here at Revenge of The Fans for being a movie nerd, I’m also a total mark for professional wrestling and, while I may not keep up with the current product, I still have an endless amount of love and respect for the business thanks to my 20 years of dedicated fandom between 1987 and 2007 (and the Something To Wrestle with Bruce Prichard podcast).

So this movie would be a tall order, because I’d be watching it as both a film nerd and a smart mark.

And I’ve got good news for you: Fighting With My Family delivered the goods! (Dave Meltzer would probably give it 3 stars)

Directed by Stephen Merchant, the film shares the true story of how Saraya-Jade Bevis went from wrestling for a handful of fans in a rundown company operated by her scrappy and enterprising parents to becoming the WWE Diva Paige in grand fashion with an amazing debut that practically kickstarted the company’s “Women’s Revolution.”

Merchant was the first wild card for me. I wondered what kind of touch the man best known for co-creating comedies like BBC’s The Office and Life Is Short is Ricky Gervais would use on this material. Would he lampoon professional wrestling, and kind of point and laugh at some of its sillier elements? Would he try to pull off what Darron Aronofsky did with The Wrestler by shining a light on how unglamorous the industry is and attempt to change your perception of wrestling?

To my pleasant surprise, he did neither.

Instead, what he crafted here was a film that plays like a wrestling match.

It’s got a simplistic view on how life works, it can be super on the nose at times- kind of explaining to you how you should feel, rather than letting the story itself convey that with nuance and tact- but it’s a ton of fun to watch, with lead characters and storyline themes that are easy to relate to. Just like pro wrestling.

Merchant has a very light touch throughout. You can definitely see his brand of humor throughout, but you can also feel him smiling off-camera. Because this is a good story. A sweet story. A triumphant story. And like all great wrestling angles, you need a likable lead character, aka A babyface.

Thankfully, Florence Pugh as Soraya/Paige is exactly that.

The best thing I can say about Pugh is how believable she is. She’s very credible in this role, and was great at conveying Bevis’ insecurities, uncertainty, and priorities in a way that made me root for her. And she also really looks, in the ring, like she can hold her own, which is a must.

But something that surprised me was the strength of Jack Lowden’s performance as her brother Zak “Zodiac” Frary. In fact, his entire subplot threw me for a loop and captured the heart of the wrestling fan in me almost immediately.

His Zak Zodiac is the prototypical journeyman wrestler.

In the professional wresting business, as Dwayne “The Rock” Johnson points out in his extended cameo in Fighting With My Family, you’ve got two kinds of performers. You have the stars, and you have the star makers. And while the stars get all of the fame and fortune, chances are they would’ve never made it to such heights if not for the efforts of other wrestlers to make them look good and get them “over” with the fans.

They’re the unsung heroes of the business, and Fighting With My Family instantly won me over because it’s a film that sings for them.

Lowden’s work as Zak is fantastic. He brilliantly captures the frustration of discovering that “Yes, you do have a place in the wrestling business- which is your life’s dream- but it’s not as The Guy, but rather The Guy Who Makes The Guy.”

As an actor, he balances the character with just the right amount of heart, humor, and pathos to make him relatable even when he’s at his worst. You feel his pain, and you relate to his struggle, because we all have dreams and it hurts when see them get grounded or seemingly evaporate right in front of us.

He’s like a younger, taller, handsome Simon Pegg, and I expect big things from him.

The strength of Lowden and Pugh’s performances are not an anomaly, though. Most of the film’s cast does a great job of elevating the material. Because if I’m being honest, it needs some elevation. The script, as I mentioned earlier, is a little simple, and can be more than a little obvious at times. But what stops it from being something that probably should’ve just aired on the Hallmark Channel is the film’s ensemble cast.

Vince Vaughn, Lena Headey, and Nick Frost anchor the supporting cast here, and they’re each a delight to watch. The same can be said for some of the film’s bit players, who make up the Knight’s rag tag wrestling company and Paige’s NXT peers as she trains to become a diva. Overall, there’s a lot to cheer for in the acting department, which is why I think the film succeeds.

Vaughn’s character Hutch, by the way, is another ode to The Journeyman Wrestler concept, and while the film nerd in me wanted to shout “Oh, ok! Here’s another cliche ‘Grouchy Coach with a Heart of Gold’ trope. Pfft!” the wrestling mark in me actually teared up about his arc and what he symbolizes in the story.

I have a feeling many of you will have a similar wrestling match within you as you watch Fighting With My Family, because it’s not necessarily a very good movie, but it’s a very good wrestling movie.

A good example of how this’ll appeal to fans who love the big, crazy, colorful world of wrestling is a hilariously dry scene early in the film where Frost’s low-level promoter is negotiating what types of “bumps” his out-of-shape client is willing to take at an upcoming show. His negotiation with his talent involves beating him with a garbage can lid and hitting him with a bowling ball. The two actors (Frost and Elroy Powell) play it off with a straight-faced “business as usual” composure that perfectly captures the inherent absurdity of pro wrestling while also reminding you this is a Stephen Merchant film.

If The Wrestler was an exposé on wrestling’s seedy underbelly, taking a harsh look at the life of a grappler in the twilight of their career, then Fighting With My Family is the plucky, optimistic rookie who just got signed to NXT, whose dreams remain intact, and who thinks they’ll be a legend one day! One could almost say the two films serve as bookends.

Lastly, one of the biggest reasons I’m going to be more generous with the film’s grade than I probably should be, is because of one of its big messages.

And that message is “Be happy where you are. We all have dreams to strive towards, and big lofty ambitions in our heads. But don’t forget to occasionally take a step back and realize just how good you really have it, and the impact you have on those around you. Sometimes your lot in life is simply to help. Sure, it’d be great to be a star one day, but maybe you already are to someone else.“

That spoke to me.

And Fighting With My Family spoke to both the movie nerd and the wrestling mark in me, so I definitely recommend it if you’ve seen the trailers and are interested in seeing this story play out. I think you’ll have a great time.

Next post AVENGERS: ENDGAME Synopsis Is Out, Plus New Official Image!