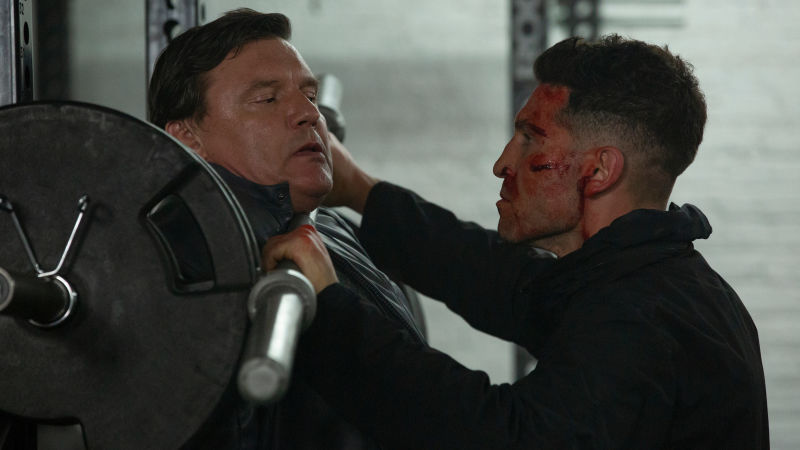 “The only way to win is to not play.” Amy (Rachel) offers that advice to Frank as One-Eyed Jacks opens. It is not the only prescient piece of advice she gives him. Frank, as the Punisher, often inserts himself into situations that are less than favorable.

Amy, despite having been with Frank only a short while, understands this. She can see he has a self-destructive streak. That doesn’t bother Frank; he welcomes the violence, and the odds never factor in for him because death is the ultimate end. One day, or another, Frank’s fate will mirror that of his many victims. He’s not going to run from that.

That thread carries the episode. As Amy and Frank further their mission to track down who murdered her friends, Frank inevitably encounters conflict. That fight, a knockdown drag out in a Russian gym, is the high point of the episode (It also features “The Dean of Mean” Keith Jardine and one-time budding WWE superstar Vladimir Kozlov, which made me geek out).

The rest of the episode treads on the familiar themes that have persisted throughout this season. Each of these characters is flawed or damaged in some way. Madani, like Billy, is struggling to come to grips with what happened to her. Her actions have demonstrated that anxiety. In One-Eyed Jacks, it is illustrated further through her painful admissions at a group therapy session run by Frank’s old friend, Curtis (Jason R. Moore).

As for Billy, the frayed nature of his psyche grows more fractured by the day. He’s haunted by the cryptic dreams of what Frank did to him. He’s unwell, a situation not aided by his weird psychiatrist. She—and you could’ve probably guessed this—too has skeletons in her closet. Her work with him is unable to quell the rage that is bubbling within him. He’s a ticking time bomb, and as One-Eyed Jacks alludes, he’s planning and recruiting for the chaos to come.

The last major development of episode 5 involved the reassertion of Pilgrim, the stoic man of faith who deals in lead and scripture. After we’re given a window into his masochism, Schultz once again comes knocking. The girl must be found. That request involves Pilgrim returning to New York, a place he refers to as “unclean.” What caused his distaste for the “Big Apple” is another secret yet to be unveiled.

Now, Frank, Billy, and Pilgrim will all occupy the same space. What happens next is a foregone conclusion.

Overall, One-Eyed Jacks was another solid outing for The Punisher, even if it tends to tread too much water. The glaring weakness is Amy. Aside from being Frank’s personal Jiminy Cricket, it doesn’t appear they know what to do with her character. She’s just a foil, primarily an uninteresting one, and nothing we’ve seen from her at all indicates why it matters so much to get her out of the picture.