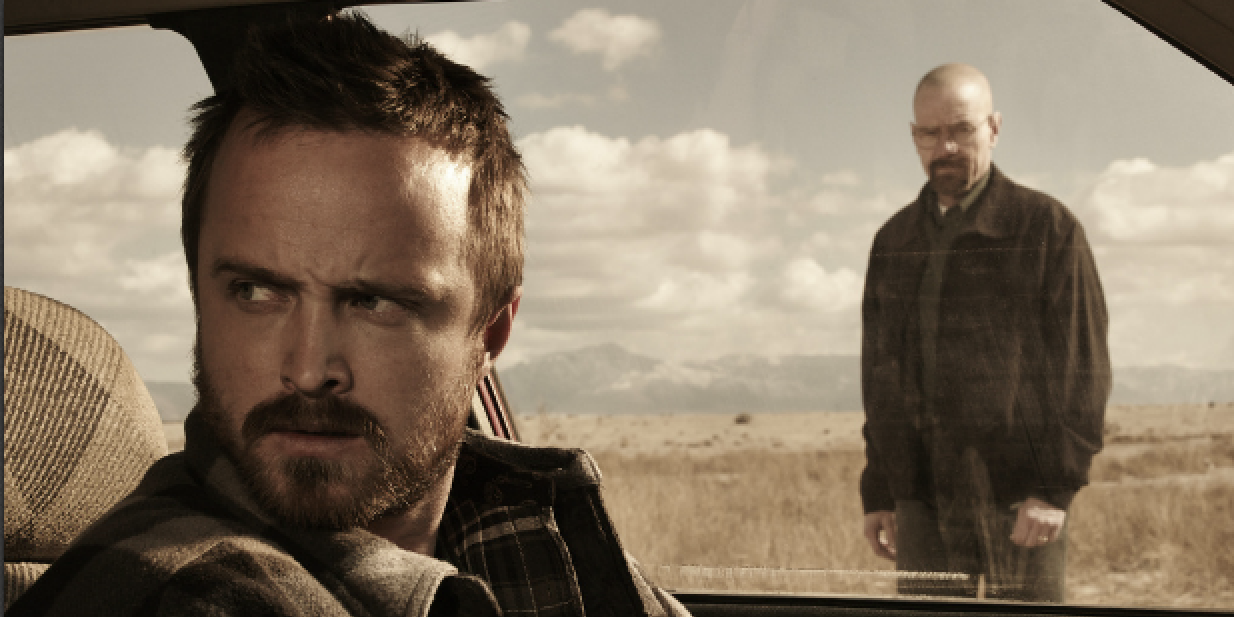 Disclaimer: Since this is a piece about Theories, which will be based on things that have already occurred in the Breaking Bad universe, there will be *SPOILERS* So either stop reading (and start watching Breaking Bad immediately), or grab some Pollos Hermanos and join me!

Upon reading MFR’s exclusive report yesterday about the post-Breaking Bad film codenamed Greenbrier, I found myself thinking, “This is one heck of a misdirection.” A misdirection because all the characters that were officially revealed are either deceased or supporting characters who would only be a small part of Jesse’s story when you look at it through the context of their roles in the original series. And even then, it’s possible they may have only been brought back to film flashback scenes. A stretch? Maybe. But, with very few details revealed let’s have a little speculative fun, shall we? Let’s do a little something I like to call #TheorySpiral.

Put on your tinfoil hat and take the red pill cause we’re about to head down a rabbit hole of crazy!

As I said earlier, I don’t think this casting reveal says anything about the overall story. We’re still speculating on where this is all headed. Back in 2013, Vince Gilligan told GQ what he thought happened with Jesse, post-Breaking Bad:

“My personal feeling is that he got away. But the most likely thing, as negative as this sounds, is that they’re going to find this kid’s fingerprints all over this lab and they’re going to find him within a day or a week or a month. And he’s still going to be on the hook for the murder of two federal agents. But yeah, even though that’s the most likely outcome, the way I see it is that he got away and got to Alaska, changed his name, and had a new life. You want that for the kid. He deserves it.”

With that said the presence of characters like Walt, Jane, Mike and Todd inevitably means flashbacks. However, it’s possible that we do see these characters projected in another way. If the movie picks up immediately following the series finale, we’ll see a traumatized Jesse driving off to “freedom” while still processing what he had just gone through. It would only make sense that people like Jane and Mike, who he had strong connections with, would be in his thoughts as an emotional crutch. Guiding him as he tries to get his life back to some sort of normalcy.

Because they shared such a polarizing relationship, seeing Walt serve as the embodiment of his emotional highs and lows wouldn’t be much of a stretch. There could be moments where Jesse is riding a high of relief as he seeks this new found “freedom.” But, then, just as he did throughout the series, Walt would be there to reel Jesse back in. Manipulating and making him second guess his choices. To sum up it as MFR and Associate Editor Matt Vernier speculated, Jesse would continue to be haunted by his past. It’s just a matter of how much it would affect him.

Another mention was of a character (or characters) from Better Call Saul who has never been on Breaking Bad before. If you’ve been following BCS there’s one obvious choice (okay, maybe two) as to who that could be. Jimmy aka Saul’s loyal and extremely forgiving girlfriend, Kim Wexler (Btw, if you haven’t watched BCS I HIGHLY recommend checking it out. That is all). Bringing Kim (played by Rhea Seehorn) into the fold adds another connective layer. But it also makes you wonder what role she should could potentially play. With the way season four of BCS ended it’s becoming clear that Kim and Jimmy/Saul are headed for an inevitable split. One wonders how much of a connection was lost between the two during Breaking Bad and if Saul possibly sent one last message to her explaining how he was going into hiding. Maybe her legal skills come into play as a final favor for Saul. This becomes even more interesting when you remember that she was never mentioned once during BB.

Who’s the “okay maybe two” I was referring to? Nacho Vargas (played by Michael Mando). He has played a pivotal role in BCS so far. The only problem with that theory is that he’s had very limited interactions with Saul. And even then, you could say when Nacho hired Saul it was when he knew him under his real name, Jimmy McGill. Most of his interactions have been with Mike. And we have yet to see how his story plays out. So, we’ll table that theory while season five develops.

Sticking with the Better Call Saul connection, let’s circle back to what Bryan Cranston said on the Dan Patrick show last November:

“It’s a great story and there’s a lot of people who felt they wanted to see some kind of completion to some of these storylines that were left open and this idea, from what I’m told, gets into at least a couple of the characters who were not completed as far as their journey.”

“A couple of the characters.” I’ve been stuck on this since Cranston mentioned it. One of those characters is Jesse. But who is the other character? They aren’t bringing back Walt, Jane, Mike or even Todd for closure. That leaves only one other option, Saul Goodman. Even though he wasn’t a main character he was pivotal towards the end of the series. And we didn’t get any closure with him. All we knew was that he was going into hiding with the help of Ed, aka The Disappearer. Luckily, Better Call Saul has fleshed out his story and given us a prequel of how Jimmy McGill evolves into Saul Goodman. Not to mention we have been given a ton of flash forwards showing Saul under the name Gene, working at Cinnabon.

With Ed set to appear in Greenbrier, is it possible Jesse tries to use him to get in contact with Saul? I sure wouldn’t mind seeing Jesse go surprise “Gene” at the mall at some point.

This all sets up for what could be closure. Not just Jesse but for Saul and the entire Breaking Bad universe. And as noted earlier, about Better Call Saul, creator Vince Gilligan has the luxury of not doing a whole story on Saul because it’s already been covered in the television show. So, seamlessly adding Saul to Jesse’s story would not distract the audience. If anything, it would add depth to the movie- because they both survived an utterly insane situation, and are both on the run.

This #TheorySpiral could continue for hours. These shows are amazing. But I feel like this enough to get the creative juices flowing that help us dissect what a post-Breaking Bad movie might be like. There’s more info to come. Till then, keep those tin foil hats handy and don’t take too many red pills. The rabbit hole still has a long way to go.

For now, let me know what your theories about the plot of the movie are in the Comments below.