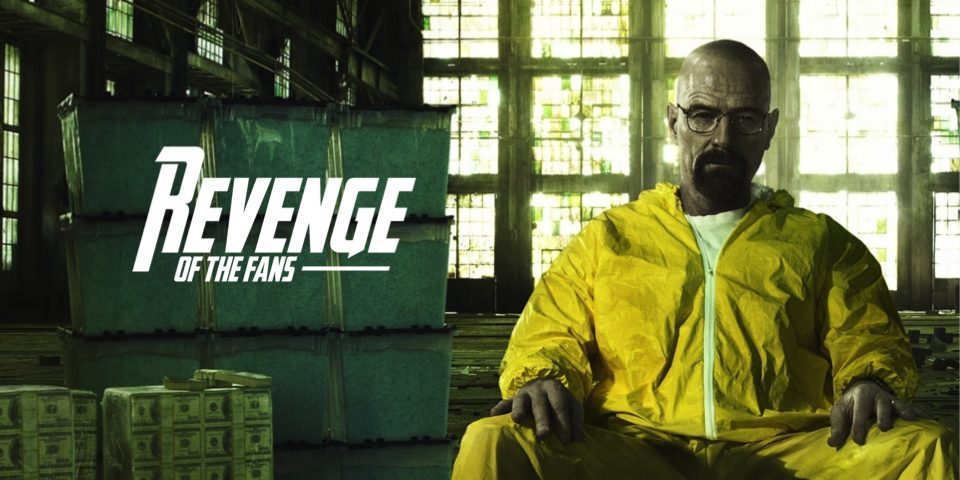 Breaking Bad is one of those series that has a permanent residence on many people’s “Best TV Shows Ever” lists. Similar to series like The Wire, The Sopranos, and Game of Thrones, it’s considered a landmark achievement. That’s why it was such a big deal last November when we learned of the mysterious project called Greenbrier.

The project was said to be a film set in the Breaking Bad universe, but it quickly became clear that it was much more than that- as the very next day it was revealed that Aaron Paul would return to lead the film because it would center on the continued (mis)adventures of one Jesse Pinkman.

And since then, things have been quiet…until now.

See, we are big Breaking Bad fans here at Revenge of The Fans, and it doesn’t take much to get people like myself or Associate Editor Matt Vernier to wax philosophical about Vince Gilligan’s master work (or it’s equally great prequel Better Call Saul), so I had to do some digging…

One of the biggest questions I had centered on the cast. After all, Greenbrier (or whatever it ends up being called) is said to be a sequel to the series and would pick up after Jesse’s escape at the end of the final episode. So with that in mind, I wanted to know if Paul was the only actor returning.

Turns out, he’s not. And that seems to have some major implications about the way Gilligan is approaching this story.

Now, before I reveal the names I discovered on the official cast list for Greenbrier, I’m going to warn you that this could be considered *SPOILERISH* since I don’t know what capacity they’ll appear in the movie in.

So take a moment to consider that warning before you read on.

And as cool (and as potentially revealing) as some of those names are, the two names sure to excite Breaking Bad fans are Krysten Ritter, and “Mr. White” himself, Bryan Cranston!

That’s right, folks. Not only will the story find a way bring back Ritter’s Jane- with whom Jesse had a tragic love affair way back during the show’s second season- but series star Cranston is set to play some sort of role in the new film as well. This, despite both characters having met their ends on the show.

“If Vince Gilligan asked me to do it, sure, absolutely. He’s a genius,” Cranston said on The Dan Patrick Show last November when asked if he’d return to the iconic role. And he was already quite aware of the project when asked about it. “It’s a great story, and there’s a lot of people who felt that they wanted to see some sort of completion to some of these storylines that were left open.“

This idea of giving closure to some of the characters and arcs that were left hanging seems to be a key motivator for the story of Greenbrier– which explains the abundance of returning characters we haven’t seen or heard from in ages.

“This idea, from what I was told, gets into at least a couple of the characters who were not completed as far as their journey,” Cranston stated at the time. “I can’t wait to see all those people again…even if I just come by to visit!” he coyly concluded.

At this time, I don’t know any plot details, so anything beyond this point is mere speculation.

But when you consider Cranston’s remarks about bringing closure to older arcs, and when you consider the impact both Walter White and Jane Margolis had on Jesse, I think it’s fair to assume that there will be ample flashbacks in Greenbrier. And considering we haven’t seen Cranston walking around with a shaved head as he promotes The Upside, I think it’s another safe bet that whatever scene he’s in takes place in the very early days of Jesse and Walter’s collaboration. But who knows? Maybe they got him a very convincing bald cap.

Another option, floated to me by Matt when we were discussing this story, is that perhaps Jesse is haunted by his past. Surely, the decision to join Mr. White on his insane venture as a maker and distributor of meth took a huge toll on his life and cost him many relationships and loved ones. Now, as he tries to return to a life of normalcy after escaping his captors, maybe he has dreams or visions that involve Walter and Jane.

The fact they brought back Forster, who plays a mysterious figure that helps people disappear and start new lives, is also very telling of where the story is heading.

There are many possibilities for how this will go, and I can’t wait to see this film- which is written and directed by Gilligan.

Lastly, the cast also includes some interesting connections to Better Call Saul– with some actors appearing in Greenbrier who never appeared on Breaking Bad. So I would expect that to mean this movie will intersect with an upcoming season of the Saul spinoff- which takes place both in the past and the future with regard to the events depicted on Breaking Bad.

I won’t reveal who, because I think we’ve covered enough *SPOILERISH* material for one day. But it’s cool to see how this film aims to combine all kinds of threads from every facet of the Breaking Bad universe.

This thing’s going to be really special, folks.

Next post ROBOCOP RETURNS Producer Offers Update On The Sequel