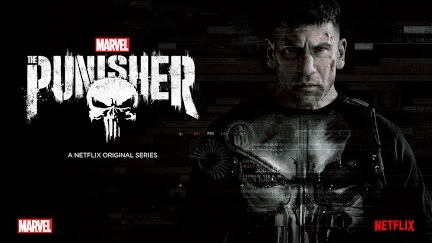 No one can deny the fact that Jon Bernthal’s portrayal of Frank Castle, aka The Punisher, is one of the highlights of the Marvel/Netflix shows. Introduced to critical and fan acclaim during Daredevil’s sophomore season, The Punisher had a season green-lit within weeks of his debut. During season one of The Punisher, we find Castle seeking to dole out punishment as he begins to uncover the mysterious identities of those that killed his family and attempted to kill him. Bringing a heinous CIA operation ran by Special Agent Rawlins (Paul Schulze) to light and coming face-to-face with the betrayal of his former brother-in-arms Billy Russo (Ben Barnes). The conflict comes to ahead with Castle finally getting his revenge on Rawlins, and is followed by his epic showdown with Russo at the carousel where his family murdered.

The final conflict of season one left Agent Madani (Amber Rose Revah) recovering from a head-shot from Russo, Castle receiving a clean slate and a new identity from the government agencies that did him wrong and Russo barely hanging on to life with his face left disfigured by our titular hero. With his new identity, Frank Castle says goodbye to his partner Micro (Ebon Moss-Bachrach) and begins his travels across America, in an attempt to start over.

A year has passed and we find Frank’s travels have led him to a random bar in Michigan. Ready to leave the “war” behind, he gets involved with Beth (Alexa Davalos), a strong-willed and affirmative woman whom Frank begins to confide in. His enjoyment of a normal is cut short when he notices a group of individuals infiltrate the bar to capture a young girl (Giorgia Whigman) with the intent to kill. Not being able to look away and leave this young girl to face this group on her own, Frank Castle makes the choice to step in.

The fight that ensues triggers an avalanche that pits The Pilgrim (Josh Stewart) against Frank and The Girl; meanwhile Billy Russo, mentally and facially scarred, escapes from the hospital where he was held captive and was being treated by Dr. Krista Dumont (Floriana Lima) due to his memory loss and trauma. All roads lead to New York as Frank returns bring his war with Russo/Jigsa to a close once and for all; while also untangling the threads that shed light into the compromised blackmail plan that have made him and The Girl, The Pilgrim‘s primary targets.

A study in trauma, this season explores the different effects that trauma can have on different people and how it can shape them and the decisions they make. Frank must come to terms with who he is and embrace his true self without remorse beyond the traumas that he has suffered. Billy Russo/Jigsaw is an example of how trauma can fuel who we really are. Dr. Dumont shows us how trauma can paralyze in a moment and how our reasoning is blinded due to that stagnation. Agent Madani how trauma can alert us to our reality and force us to make necessary life-altering decisions. The Girl journey highlights how trauma can force us to create barriers that keep people away; but also, how when surrounded by the right people, one can start over. Curtis (Jason R. Moore) how trauma does not have to define us and we can remain ourselves in the midst of chaos.

My favorite new addition to the cast is Josh Stewart and his portrayal John a.k.a The Pilgrim. Based on the comic book character solely known as The Mennonite, Stewart‘s stoic and silent demeanor as The Pilgrim contrast effectively with Bernthal/Castle’s focused ferocity. With his eyes set on divine redemption and retirement from a hit-man’s life; he is a man on mission that will stop at nothing until he fulfills what his employers require him. As Frank Castle‘s journey into The Punisher persona comes full circle; The Pilgrim seeks to finish this last job and end his history of violence.

The character of The Girl (Giorgia Whigman) mostly acts a season-long foil to Bernthal’s Castle; their relationship acts as window to Frank‘s humanity. With a great performance by Whigman, her character allows us to see who Castle would had been outside of the “war zone” as you grow to care for their pseudo father-daughter relationship that blossoms throughout the season. Similar to Whigman’s character, Lima’s Dr. Dumont attempts to ground Russo’s twisted tendencies; but ends up becoming consumed by the madness that emanates from his “patient” damaged personality. Her descent to Jigsaw‘s level is interesting to watch.

One of the characters that really surprised me this time around was Moore’s Curtis Hoyle. You grow to enjoy his time with Frank and how, due to their bond, he is one of the few people that can call him out on his shortcomings that he listens to. His is the one character that is drawn into the crossfire and is able to preserve who he is, in spite of the challenges that he faces while trying to help Castle beat Russo. I’m really glad that he was given bigger role this time around and the show is better for it.

Though not as intriguing as season one was, in terms of mystery, The Punisher season two succeeds in providing us a satisfying narrative throughout its 13-episode run. The action is brutal and exceptional as ever. It takes it time to resolve all of the arcs started during the previous season and this one presently; leaving the show in a promising position if there ever was a chance for this title to continue.

It is not an amazing show; but it’s a great Punisher show. The series best quality is their treatment of Frank Castle/The Punisher as a force of nature that no one can control. All the supporting characters must recognize what/who he is and must operate around him. This season’s only downfall this time around is its dependency on everything that happened during season one. There is not enough new material to allow this outing to stand out. The new characters and elements introduced work well and are enjoyable; but are easily drowned by the continuation of the familiar. It was a good second season, nonetheless.

All episodes of The Punisher Season 2 are currently available for streaming on Netflix.

If you enjoyed this overview about The Punisher Season 2, then you’ll also enjoy Thomas L. Kelly’s reviews of each episode, which will be going up throughout the next week or two, with Episode 1 going up later today.

Next post RUMOR: New Details On ZOMBIELAND 2 Are Out!