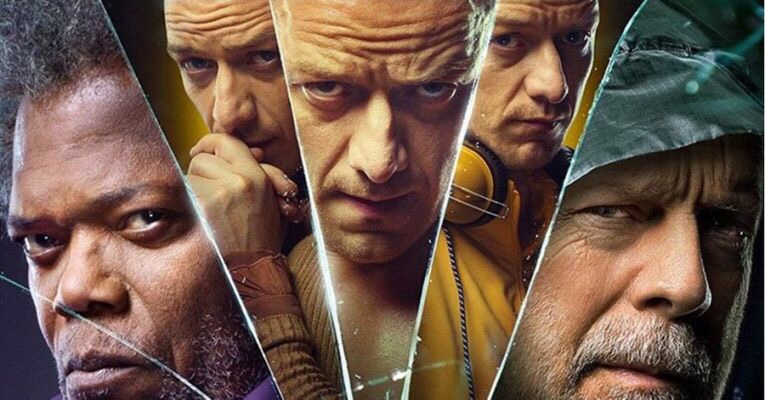 M. Night Shyamalan has teased us for years with a sequel to one of his most beloved films, Unbreakable. It was a cult classic that was a glorious dissection of superhero mythology, before the advent of the Marvel Cinematic Universe or even really the superhero movie boom. And it’s prestige has only grown over the years, even if the director’s reputation hit rough waters.

So in 2016, when Split turned out to be a film set in the same universe as Unbreakable, fans freaked. The announcement of a sequel quickly followed, and that film would be called Glass. The title alone got fans excited, as it suggested that the Mastermind himself Mr. Glass (Samuel L. Jackson) would take front and center.

What we get is a film where our eponymous character doesn’t even appear til almost an hour into the movie, and has no bearing on the plot until the final act.

Bruce Willis and James McAvoy return as their characters from the previous films. Willis is David Dunn, a vigilante known as the Overseer and McAvoy is Kevin, a super villain with 24 different personalities known as The Horde. Sarah Paulson plays a new character known as Dr. Staple, a psychiatrist who tries to convince our three main characters that their superhuman abilities are a result of delusion stemming from trauma they’ve endured in their past.

This film is a frustrating exercise of pontification rather then true engagement of thematic material. Shyamalan is more concerned with showing off how deep and thoughtful his questions are rather then engage his audience. While the idea of having these characters question their superhuman abilities is a potentially intriguing one, the script does nothing with the concept. It’s introduced too late into the story to provide any real intrigue. And the fact that the film actually has David actually question his abilities after so little time is devoted to posing the question, makes the whole enterprise even more absurd.

The film also never lets any of his plot points or character moments breathe to have any emotional potency. It all leads to a nonsensical anti-climax, with a final showdown that is meant as a clever misdirection and just ends up making the film feel cheap.

The whole film, we are lead to believe the film will end in a final showdown at a new tower complex in Philadelphia. What we get is a shoddily crafted climax set in a, wait for it, a hallway… and then a lawn. ARE YOU KIDDING ME?!? It’s like being promised a Broadway show and getting a date at Applebee’s instead. The worst sin is that our three protagonists are killed off for no discernible reason other for shock value and to set up a nonsensical prologue that underwhelms due to our complete lack of engagement with our main villain, which is SURPRISE… not Mr. Glass. It is instead a secret society that tasks themselves with maintaining balance by keeping superhumans secret, even resorting to murder if necessary. There is a twist (shocker) where we learn that Dr. Staple is an agent of this organization, with a mission to rehabilitate superhuman individuals and convince them of delusion. Which is a pretty dumb plan to be honest. It doesn’t matter because this group is introduced way too late for anyone to care, and what we do know about them makes them look like the biggest pack of ineffective goons this side of the Putty Patrol.

We have waited 19 years for this movie. Split ended up being a decent stealth sequel, but this is the proper sequel to Unbreakable we all wanted. And this is what we got. It’s not the only follow-up to disappoint after a decade plus wait, but it is without doubt, the most egregious offender. And in a category that includes Kingdom of the Crystal Skull and The Phantom Menace, that is a sad state of affairs.

Previous post Tales From the DC Multiverse: The Podcast #71

Next post Box Office: GLASS Is Half Full (Or Is It Half Empty?)