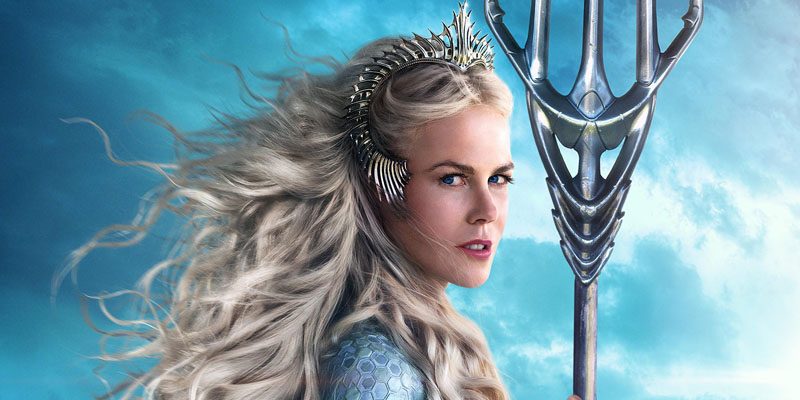 RTF Review: “AQUAMAN Is A Thrill Ride With A Beautiful Message For A World In Need“

One thing is very clear about Aquaman right from the outset: This is not like other recent DC films. In fact, it’s not like recent Marvel films either. It’s a unique animal, and it sets its own tone. Your enjoyment of that tone will ultimately determine what you think of the film. If you can handle a good, old fashioned adventure that doesn’t mind being cheesy and on-the-nose at times, you’re going to enjoy this.

For me, the biggest departure from the existing DCU canon, which includes Man of Steel, Batman v Superman, Suicide Squad, Wonder Woman, and Justice League, is the lack of contemplation. While the early chapters of the new cinematic DC canon were rife with big ideas, poetic imagery, and layered, psychological narratives, Aquaman is a movie that wants you to focus strictly on the surface. And, in a way, that’s kind of refreshing.

Director James Wan, working off of a script by David Leslie Johnson-McGoldrick and Will Beall, seems to have one goal in mind: Taking you on a fun, eye-popping adventure. And, to that end, he made the decision to keep all the soulful ruminating and hidden meanings at the door and give us very little extra to consider except for what’s right in front of us.

The cons of that are that it leads to some clunky, overly-obvious dialogue, and performances from actors like Yahya Abdul-Mateen II, Amber Heard, and- at times- Patrick Wilson that feel like they’re ripped right out of a cheesy 80s cartoon. But that’s also one of the film’s pros: It has fun with the material and the world it’s building.

And I don’t mean “fun” in the sense of ham-fisted jokes and tension-killing gags that pull you out of the moment. I mean it in the sense of, “Hey, this is a wild and vivid world we’re creating. Come dive in and check out all of the delightfully weird and creatively over-the-top stuff we have going on. Let us transport you someplace cool for a couple hours.” It’s kind of hammy, and kind of excessively larger than life, but it also owns all that and dares you to leave your pretenses at the door and to just play for a while.

If Spider-Man: Into The Spider-Verse felt like a comic book come to life, Aquaman feels like a cartoon (think He-Man or Thundercats) come to life.

So it’s about as subtle as a bowling ball, but that’s okay, because at least it knows it’s all a game.

The film is a visual powerhouse, where the spectacle manages to actually be spectacular, and that’s no small feat in this age of big budget blockbusters that love to flaunt their effects budgets. What makes the imagery in Aquaman rise above your usual CG-fest is its unique design aesthetic. Nothing really looks like anything else you’ve seen before. Wan and his team worked diligently to create a very detailed, ornate world for you to gawk at, with an apparent emphasis on making it like nothing you’ve ever experienced. If I had to compare it to another film, the only reasonable comparison would be Avatar, but even doing that would be selling Aquaman short. It’s a gorgeous movie.

In true DC fashion (Justice League excluded) the film has a riveting score that does a fantastic job of heightening the emotions of what we’re watching on screen. There’s nothing nondescript or generic about what Rupert Gregson-Williams composed for Aquaman. The music is sweeping, epic, powerful, and is absolutely part of the storytelling and not just mere accompaniment.

That’s what makes the couple of times a real song is used as the backdrop for a scene kind of groan-inducing. To shift from this engrossing score to a cover of “Africa” (done by Pitbull??) in the middle of an otherwise epic aural experience is jarring to say the least, and that was one of my few recurring gripes. They did the “real song” with lyrics thing a few times throughout the movie, and it fell flat for me each time. It took me right out of it. (Sorry, Mr. 305.)

The story of the film is sound and easy to follow, if not a bit familiar. It’s a classic story, filled with tropes we’ve seen before, and doesn’t really bring anything all that new to the table, but I’m fine with that. I’ve always said that plot is overrated. There are amazing films that have either no plot, or plots we’ve seen before, that are still a joy to watch because movies are less about their “ingenious plot devices” than they are about the ride they take us on. So Aquaman sits alongside other recent successes like Deadpool in terms of telling a story we’ve seen before but doing it in a way that makes it feel thrilling and fresh anyway.

I can’t say there was a standout performance in the acting category. Certainly no one was bad (save for Abdul-Mateen II, but I attribute most of that to the material he was given to work with), but no one blew me away either. Everyone just kind of plays their parts exactly how you’d imagine they would, and does a serviceable job at it. I’d love to rave about Jason Momoa, but he didn’t really do anything here that we hadn’t already seen elsewhere. The biggest compliment I can give him is that he’s continued to turn Arthur Curry, aka Aquaman, into a cool, likable badass. And that, in and of itself, is a big deal.

In terms of the film’s pacing, editing, and overall flow, I’m happy to report that I never felt the urge to check my watch. Despite the film clocking in at 2:22, it never drags. It takes you around the globe to all kinds of exotic locales, keeps the vital information coming at a steady clip without getting bogged down with exposition, and has enough action and general energy to it to sustain your interest throughout.

If anything, it could’ve been a little longer and taken its time some more. Because while I thought the film was quite good, what stops it from being great is the way it glosses over things that begged for more exploration. For example, flashbacks to Arthur’s younger days feel arbitrary because we never really get to spend any time with him growing up. They’re just these quick glimpses at key moments in his life, but they feel sort of disconnected- unlike, say, in Man of Steel when they helped you to really understand what Clark’s upbringing was like. Same goes for the romantic subplot between Arthur and Mera. It’s all very easy, very surface. It just kind of happens, instead of being thoughtfully developed.

Another area that could’ve been mined for more drama and intrigue are King Orm’s motivations for war. We all know that a good hero tale is only as strong as its villain. And that’s the thing, Aquaman has a strong villain here in Wilson’s Orm. Arthur’s half-brother, who is usurping the throne, and uniting what’s left of the seven underwater kingdoms for a war against the land, has a very compelling plot. There’s political intrigue there as he manipulates his allies into doing what he wants, and there’s a ton of great allegorical material here.

Orm is furious at the way the land-dwellers treat the sea, and the earth as a whole. The oceans are boiling, the polar caps are melting, marine life is going extinct, and there’s a tragic amount of garbage and waste being pumped into our seas every single day. And he’s had enough of the people up top using the ocean as their landfill.

This is as powerful a motive as can be in this day and age, where real-life debates about climate change and the harm we’re doing to the planet rage on every day. That’s why it behooved the writers, or Wan, to come up with Arthur’s answer to that. Because Orm’s desire to go to war with the rest of the world is beyond just, and that’s one major area where the script lets us down.

Instead of exploring how Arthur plans to deal with the destruction of the planet once he becomes the King of Atlantis, it just becomes a straight up “I’m gonna fight you and your forces because you’re the bad guy and I’m the good guy” type of deal. And while the fight is thrilling, and well done, it’s a victory that feels hollow when you really think about it.

Ok, so you stopped Orm. Great. But what about the very real threat to the earth that he was trying to stop? That’s still happening. His solution may have been extreme, but that doesn’t change that the folks who live up on land are the true villains of the story. Does what’s happening to the ocean even matter to you?

So having that element be completely glossed over by our titular hero, in favor of just a good old fashioned throw down between warring half-brothers for the throne, is an example of why the film is an entertaining diversion, but not an instant classic.

And that’s fine, because that doesn’t seem like it was the kind of film Wan was trying to make. Instead of going deep, he went escapist. A little popcorn never killed anybody.

Before wrapping up, I’d like to share two moments that I really appreciated, and that elevate the film from being pure bubblegum:

And if I may end with the one overt “big picture” statement that Aquaman makes- ironic, I know, considering I started this review by saying that the film doesn’t try to be deep:

I loved what it had to say about about the power of unity. Similar to Wonder Woman, the film emphasizes that what will ultimately save the world is love. Not war. At the end of the day, it’s a story about people that “shouldn’t be together” embracing one another and, through their love, they create peace. In these xenophobic times we live in, where fear of the unknown is worse than ever, and everyone’s becoming so tribalistic, Aquaman dares to say that it’s all one big world and that the only way to keep it going…is to coexist.