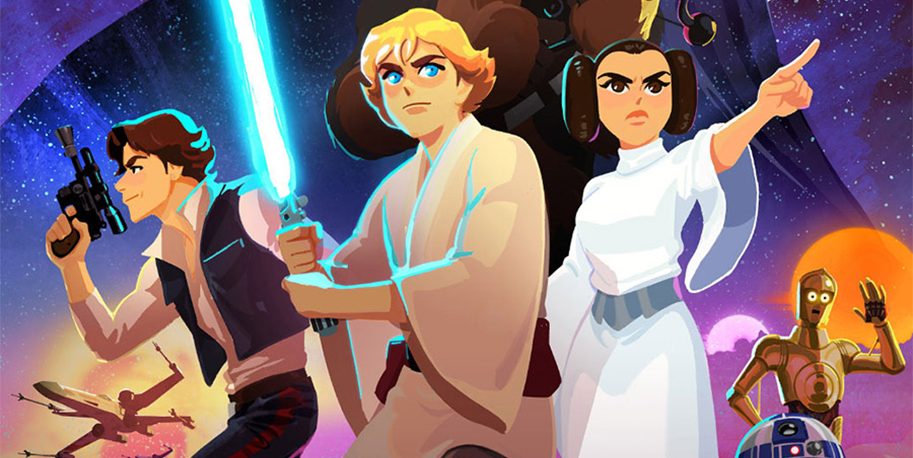 Star Wars fans might want to introduce the galaxy far, far, away to a kid who might not be old enough for the movies yet (though I watched them way young, and look at me, I turned out fine.) There were options, like Star Wars: The Clone Wars and Star Wars: Rebels. But those don’t pack the same punch as the original movies. Now there might be a way to have your cake and eat it too, with Star Wars: Galaxy Of Adventures.

Star Wars: Galaxy Of Adventures is an animated re-imagining of the live action films. James Waugh, Lucasfilm’s vice president for franchise content and strategy, says this of the new venture:

“With Galaxy of Adventures, we wanted to craft something that allowed parents to help their kids take their first step into a much larger world whether they were ready to show their kids the films or wanted to find new ways to explore the content.”

Waugh elaborates, saying it just provides another option on how to access Star Wars.

“Over the years, I’ve had so many of my friends who are parents tell me how much they wanted to introduce their kids to Star Wars but didn’t feel that their kids were quite ready for the movies yet,” Waugh says. “They wanted a way to celebrate the universe they love.”

Galaxy of Adventures does just that, providing a kid-friendly entry point into some of the greatest characters, moments, and themes from Star Wars at large. “With Episode IX coming in December, and being the conclusion of the Skywalker saga — the long journey over 40 years of storytelling comes to its end — Galaxy of Adventures walks through the great moments and themes of the stories that led us here and introduces a new generation to them, in time for many to see this finale.”

It is actually a smart move. If a kid wants to get caught up before Episode IX releases, not many would sit through 8 + movies. But doing a “cliff notes” version through animated shorts? They would eat it up.

The animation style is certainly unique, but if you need a closer look, check out the poster for it:

The series will use original dialogue, mixed with some new sounds. This might not be for you, but it is for somebody. If this is somebody’s entry into the franchise, then I am all for it.

Next post Lord and Miller Discuss Choosing Miles Morales As Lead For SPIDER-MAN: INTO THE SPIDER-VERSE