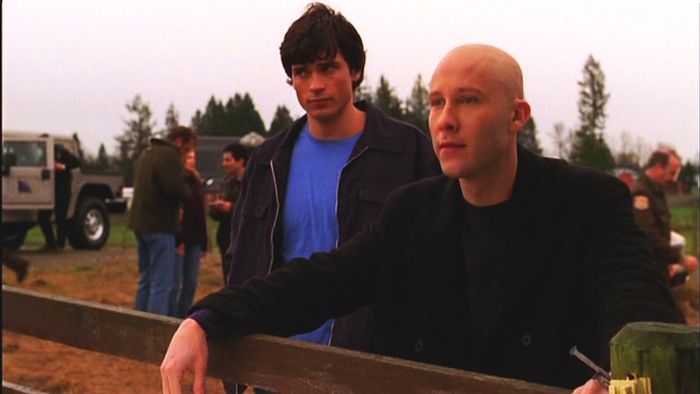 Elseworlds is the upcoming Arrowverse crossover, and while it hasn’t been released yet, we already know a ton of information.

One of the most intriguing pieces of information was that it looked like they were filming at the Kent house that was used in the show Smallville. Here is a picture of Grant Gustin standing on the porch from Melissa Benoist’s Instagram.

Now, people are so desperate to want this to happen, they are connecting crazy things together, specifically this tweet from Stephen Amell.

Pretty excited about this one… pic.twitter.com/aUppARdDXb

This picture shows Smallville actors Tom Welling (Clark Kent) and Michael Rosenbaum (Lex Luthor) at a table full of wine. Well, Amell owns Nocking Point Wines, and is letting these guys taste some of it. While Amell has been tweeting teasers of Elseworlds all throughout the filming, I don’t feel this is one of them. The Gustin picture has a bit more weight to it, but even then, it could just be “the Kent Farm is the Kent Farm on any Earth”.

If Rosenbaum and Welling were to reprise their roles for a cameo, I feel that is the ace in the hole that would be kept secret. We know so much already. There has to be something we don’t know. Bringing Smallville into the Arrowverse would certainly be a great treat.

I’m not saying it won’t happen. All I am saying is that I think this tweet is more innocent than people want it to be. Sure, Amell knows exactly what he is doing with this picture, but I wouldn’t read too much into it.

Both actors are older of course. You can see the gray stubble on Welling’s face. So if they were to show up, they would be much older versions of their characters. They could show up as different people, but then that’s more of a Smallville tribute, like how Supergirl cast Dean Cain and Teri Hatcher in different roles.

We have less than two weeks until we see the first part of Elseworlds, which airs Sunday December 9th. Hopefully fans can be thankful for what we get, and not be angry because it doesn’t fit the version in their heads.

Next post Jason Momoa Posts His First Vlog From The AQUAMAN Press Tour!