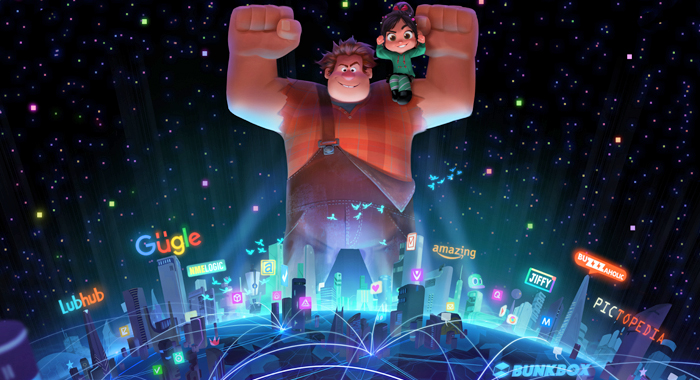 I actually wish I didn’t come across this list. The surprises would be a lot more fun if they remained surprises. Alas, it’s the dangers of the job. But it’s okay, I’ll give you the option to look away. Wreck-It Ralph 2: Ralph Breaks The Internet is coming out in a few weeks. The premise has Ralph (John C. Reilly) and Vanellope (Sarah Silverman) going to the internet for the first time.

The trailer shows Vanellope meeing all of the Disney Princesses, but there will be more familiar faces showing up too.

From here on out there will be SPOILERS about the cast of Ralph Breaks The Internet. DO NOT READ FURTHER UNLESS YOU WANT TO KNOW.

Where do we start? The biggest ones that stick out for me are: Anthony Daniels as C-3PO, Tim Allen as Buzz Lightyear, and Vin Diesel as Baby Groot. Other notable ones are Eeyore, Sonic The Hedgehog and Michael Giacchino reprising his role as FN-3181 the stormtrooper who dragged Poe Dameron to Kylo Ren on Jakku at the beginning of The Force Awakens.

All of those on top of the Disney Princesses, most of which have their original voice actors reprising the roles too. Plus, let’s not forget that Gal Gadot has a role in the movie too!

It sounds like Wreck-It Ralph 2: Ralph Breaks The Internet is going to be an enormously fun commercial for the Walt Disney Corporation. The Lego Movie pulled it off, why can’t this?

“Wreck-It Ralph 2” leaves Litwak’s video arcade behind, venturing into the uncharted, expansive and thrilling world of the internet—which may or may not survive Ralph’s wrecking. Video game bad guy Ralph (voice of John C. Reilly) and fellow misfit Vanellope von Schweetz (voice of Sarah Silverman) must risk it all by traveling to the world wide web in search of a replacement part to save Vanellope’s video game, Sugar Rush. In way over their heads, Ralph and Vanellope rely on the citizens of the internet—the netizens—to help navigate their way, including a webite entrepreneur named Yesss (voice of Taraji P. Henson), who is the head algorithm and the heart and soul of trend-making site “BuzzzTube.” Directed by Rich Moore (“Zootopia,” “Wreck-It Ralph”) and Phil Johnston (co-writer “Wreck-It Ralph,” “Cedar Rapids,” co-writer “Zootopia,”), and produced by Clark Spencer (“Zootopia,” “Wreck-It Ralph,” “Bolt”)