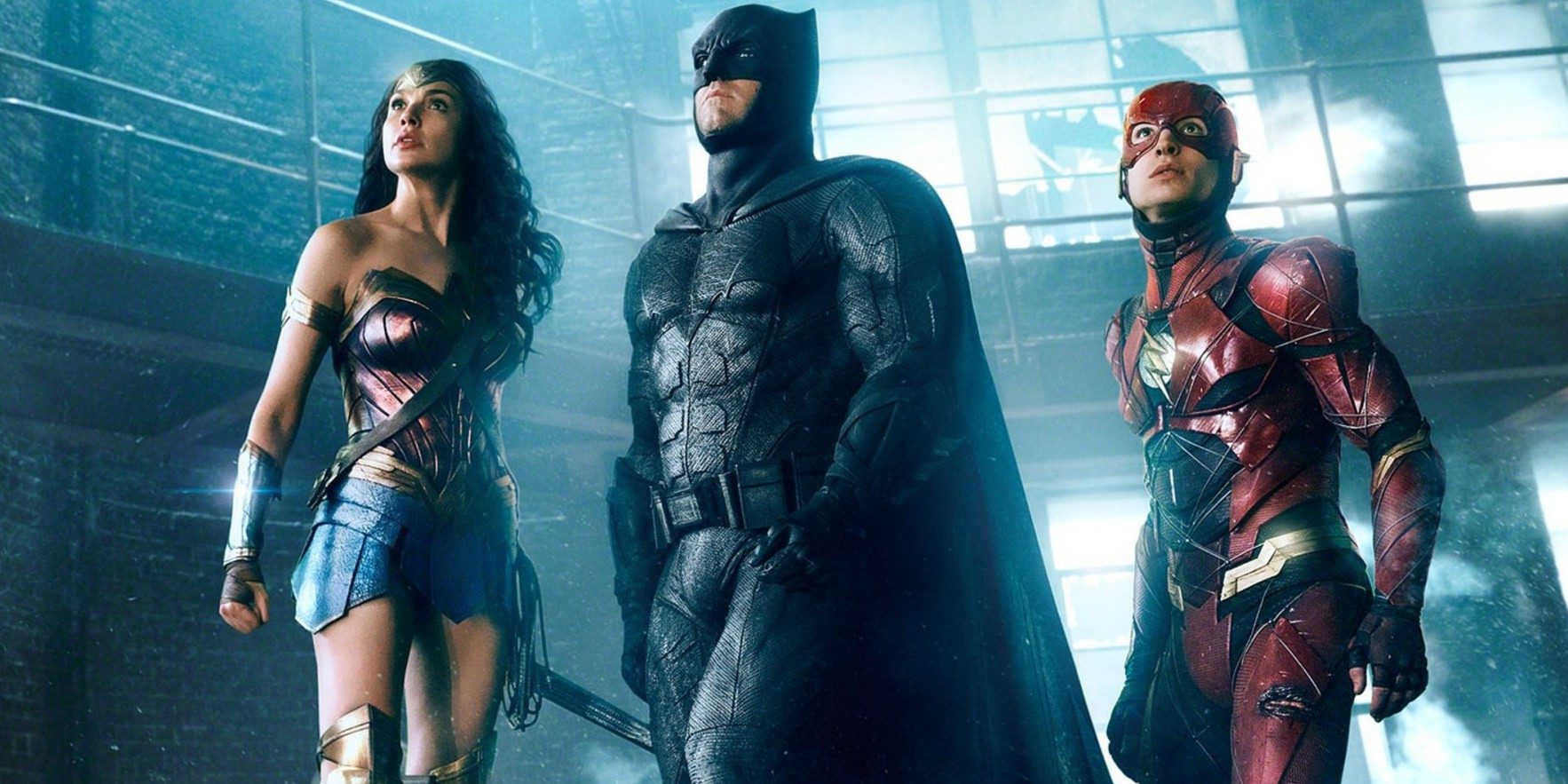 Last night, YouTuber Grace Randolph fired off a video wherein the description for it reads “So, I just found out why Wonder Woman 1984 was pushed back 7 months – my sources tell me it’s the Flashpoint! Which means a DCEU Reboot!”

I’ve seen two kinds of reactions to this theory of hers:

And while I understand the inclination to instantly jump to Option 1, since it sounds completely bananas on the surface- and doesn’t even really make sense when you think about the actual Flashpoint storyline from the book- I can also see why some would ponder if she’s onto something.

And, see, while I once debunked a scoop of hers about Dark Phoenix effectively being cancelled (a debunking which has since been confirmed), I’m in no rush to come out and squash this one.

Why? Cause there could be a kernel of truth to this.

I should probably note that I haven’t watched her video. I’ve never watched a second of anything she’s put out, but the same can be said about every other YouTuber and Geek Podcaster in existence. As I’ve outlined in my solo show, The Fanboy Podcast, I simply don’t listen or watch anyone else’s shows within my genre. It’s part of my attempts to make sure that everything you hear from me is authentically mine; My own voice, thoughts, opinions, and analysis.

So while I have respect for my peers in this industry who have found success doing the same kind of stuff I do, I don’t actually indulge in their content.

I bring all this up because I don’t know how far into her claims she went with this “Wonder Woman 1984 to incorporate Flashpoint” story of hers, or what her sources have told her. But it’s kind of irrelevant, because it’s really that core idea itself that I want to discuss today.

Something I wrote about yesterday is the sense of confusion and upheaval people feel around the idea of the state of DC’s cinematic canon. While the first five films in this new series of DC films were part of the same shared world, we’ve heard for quite some time that they’re moving away from that; That they may keep some loose “connection” but that the movies for the foreseeable future will be decidedly standalone stories with no reliance on the greater DC landscape around them.

But even that raises questions, doesn’t it?

Because no matter how much you spread these characters apart, there are still elements from the previous films that you’re going to have to address. Take Matt Reeves’ The Batman, for example. We know Reeves is intent on doing a soft reboot of sorts, having played hardball at the negotiation table with Warner Bros. to get complete creative control (and getting it!). I’ve also heard on more than one occasion that, regardless of whether Ben Affleck decided to return…at this stage, Mr. Reeves would still want to cast his own Batman.

That begs the question: What happens to what was established in Batman v Superman: Dawn of Justice and Justice League? Because even if he’s setting his movie in the past to avoid overlapping with those films, there’s still the matter of having to cast actors who can realistically seem like younger versions of Affleck, Jeremy Irons (Alfred), and J.K. Simmons (Jim Gordon). And those can be some serious creative handcuffs right there.

So it gets confusing.

For better or worse, most signs are pointing towards Henry Cavill’s time in the role being over. My own sources have told me that Warner Bros. has ceased all negotiations with the actor following one last meeting with his camp back in September. Something about the way his team approached these talks has made the studio decide he’s not worth the trouble. As such, they’re not planning on utilizing the final appearance left on his contract, because it wouldn’t make any strategic sense to keep establishing Cavill as Superman if they don’t plan on sticking with him beyond that appearance.

This means that, for all intents and purposes, whenever we do end up seeing Superman again he’s going to be played by someone else. And it’ll be another reboot of sorts, even if only a soft one that still leaves open the possibility of this new Superman interacting with Gal Gadot’s Wonder Woman and Ezra Miller’s The Flash at some point down the line.

So with both Batman and Superman getting fresh new coats of paint; With the continued tinkering of the script for The Flash; With Wonder Woman 1984 getting an extra few months of production time; And with the understanding that the folks calling the shots want to put some distance between the former wave of “DCEU” films and the new “Worlds of DC,” is it really that far-fetched that they’d try and find some storyline way to “explain” the facelift they’re giving the franchise?

Especially when you consider that they already once announced a Flashpoint movie- so, clearly, they’ve toyed with this idea in the past, even if they ended up reverting that back to being simply a The Flash solo movie.

“But How Would It Work?”

I’m glad you asked. Because one of the main reasons people are quick to laugh off Randolph’s claim is that it seems to fundamentally misunderstand what Flashpoint was all about.

But to that, I’d like to posit this: You’re being too literal.

From what I’ve gathered from her tweets on this scoop of hers, she’s not saying that The Flash would even be involved. She’s saying that Diana Prince would be the one who resets the timeline.

And that’s not crazy at all when you consider another recent rumor about Wonder Woman 1984:

Last month, Super Bro Movies published an intriguing rumor about Pedro Pascal’s role in Patty Jenkins’ sequel to last year’s smash hit Wonder Woman. To recap it, they said Pascal was playing Maxwell Lord in the film. But that’s not the interesting part. The interesting part is the supernatural element he’s going to bring to the story.

According to that report, Lord has some connection to the ancient Gods referenced in the first Wonder Woman, and he’s integral to the resurrection of Chris Pine’s Steve Trevor. If true, that means the film is really embracing the idea of magic, mysticism, and the supernatural. And when you think of it that way, there’s a distinct possibility that Diana could be confronted with some sort of fateful decision that could alter the course of history as we know it.

For example, what if she loses? What if something horrible happens and the bad guys win, only for a God to offer up a tragic solution? Give Steve back to Thanatos, the God of Death, in exchange for the possibility to go back in time and stop whatever horrors befell the world when Diana lost. In doing so, she’d be warned that messing with time can lead to all kinds of unexpected ripples. This all hypothetical spit-balling, mind you, but it’s an example of the kind of thing they could do here- especially if the film has already embraced this mystical tone.

If that- or something like it- were to happen, with this film taking place in 1984, it would essentially wipe the slate clean of everything that came after it, thus doing away with any lingering logistical hurdles- and creative handcuffs- that could impact the rest of what they’re working on.

It’d be a simple, effective solution for a franchise that’s looking to course-correct, that’s for sure.

Would it solve every issue? No. Because, technically, most of Justice League‘s principal players would’ve been born by 1984. But for general audiences, who don’t obsess about this stuff at all, it would be a creative way to continue to usher in a new era of DC on film.

And for those of us clamoring for a shared universe, this would accomplish giving us that. Because part of the reason they can’t really do the shared universe thing right now is because so many of the building blocks from their original attempt to establish one aren’t around anymore. If Wonder Woman 1984 can hit the reset button in 2020, then that means we could get some epic crossover event within a couple of years from that.

Also, who better to act as the messenger- and the gateway– to the new “Worlds of DC” than the one universally loved character from the old era, Diana?

So is Grace Randolph’s theory crazy? Only on a surface level.

Would it be helpful and beneficial to Walter Hamada and DC Entertainment? You betcha.

Would it mean that Matt Reeves really gets to unleash every ounce of his filmmaking talent onto The Batman without having to worry about any lingering continuity questions? Absolutely.

Oh, and would this cut down the wait for a new SUPERMAN film considerably? My friends, that’s a resounding “YES!“

And, honestly, just based on that last thing…even if this isn’t their plan, I kinda hope it becomes it.