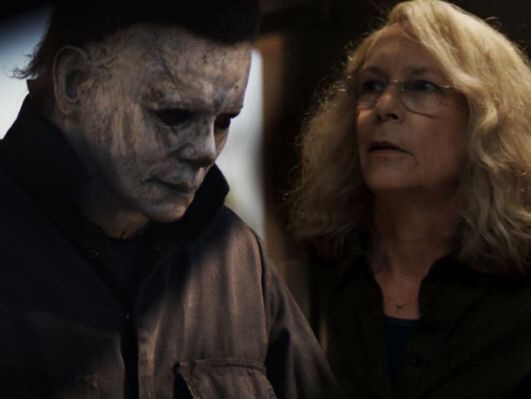 It’s been 40 years since that fateful Halloween night in Haddonfield, Illinois. Michael Myers is safely behind bars. Most sleep soundly, knowing that he is. Save for Laurie Strode, who has spent the years since that traumatic event preparing for the inevitable return of her tormentor.

Her trauma from that night has carried on to her family, most notably to her daughter Karen, who is resentful of her upbringing under Laurie.

I usually don’t include a synopsis in my reviews. I do so this time around as a preparation for our readers. Because this movie is not just a run-of-the-mill slasher film. This is a full on character drama, with the main theme being the destructive power of trauma, how it carries on from one generation to the next and the catharsis of taking on you fears head on, despite the odds.

This film does what he best genre films do. Much like The Dark Knight did with superheroes, Halloween uses the trappings of the slasher movie to tell an emotionally honest and truly thought-provoking tale. It portrays Laurie Strode as a survivor rather than a victim, but a survivor who is allowed her moments of vulnerability. It creates a more accurate depiction of survivors of trauma, not unlike how Sarah Connor evolved in Terminator 2.

Jamie Lee Curtis is sensational as Laurie Strode, and it’s her best turn in the role yet. Her evolution from terrorized teenager to a potent warrior is a wonder to see for fans of the franchise. Judy Greer is brilliant as she plays opposite Curtis as her daughter Karen, both literally and thematically. She reflects honestly the more harmful effects of Laurie’s behavior and upbringing. She grew up prepared to take on darkness, but begs the question if the cost of a relationship with her mother was really worth it. Laurie’s granddaughter Allyson, played by Andi Matichak, is beautifully understated and presents an emotional way forward from the trauma that both her mother and her grandmother endured.

The technical aspects of this film are stellar. The script by Danny McBride, Jeff Bradley and David Gordon Green strikes a wonderful balance of humor and terror. The script is elevated by the deft direction of Green, who expertly uses atmosphere to amplify the terror and keeps the human moments honest. The film is plenty brutal, but Green makes smart choices on what he chooses to show us to amplify the impact of the brutality. And John Carpenter’s score is perfect. It both moves the franchise forward while still hardening back to the style of music that made the 1978 original so effective.

RTF family, I am not one for horror films and I find slasher movies to be slaves to a repetitive formula that I typically don’t care for. The original 1978 classic is one of my few exceptions. It was a film that set the trend, yet still stands the test of time as a film that transcends convention.

For my money, this sequel stands shoulder to shoulder with John Carpenter’s masterpiece. I’m going to take a step further and say that I actually prefer it. It does everything that made the first film such an icon of horror and expands on that by adding true emotional weight and thematic layers. It isn’t just a slasher film, it is a tale of trauma, its far reaching effects and how true courage is born out of true fear. This is The Last Jedi of horror films, subverting expectations, while still delivering an experience that is quintessential Halloween.

Long live Michael Myers, but more importantly, long live Laurie Strode, for being our champion and our release.

Next post Box Office: HALLOWEEN Scares Its Way to #1!