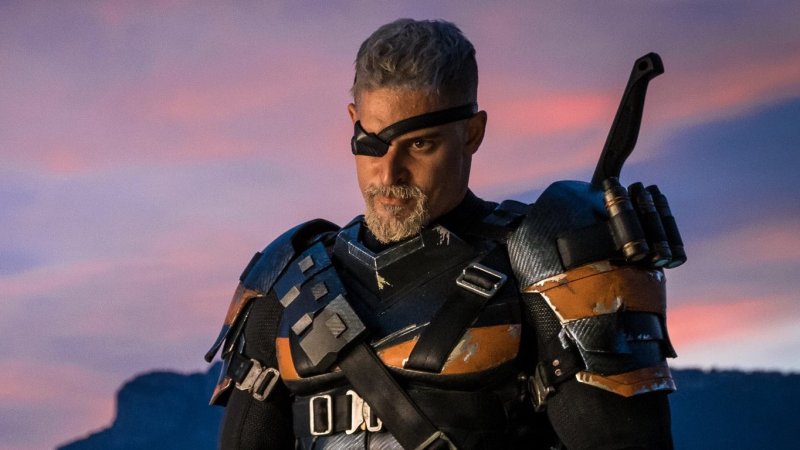 A while back, it was announced that The Raid‘s Gareth Evans was developing a Deathstroke movie that would star Joe Manganiello. If you’ll recall, Manganiello’s take on Slade Wilson was first teased during principal photography for Justice League back in 2016. Then we got to see him for real in the post-credit tag at the end of the theatrical cut of that film. But while he was initially brought into the fray to serve as the primary antagonist in the Ben Affleck-directed solo Batman movie, that all went away once Affleck left the director’s chair and his replacement, Matt Reeves, tossed the script Affleck had worked on with Geoff Johns and Chris Terrio.

Still, hope lingered on that we’d get to see Manganiello play him when it was announced that Gareth Evans was going to direct a solo Deathstroke film. This announcement was made way back in October of 2017, and- as we now know- much has changed since then. At the time, DC Entertainment was high on the idea of establishing the Legion of Doom faction as a shadow organization that was adding to its ranks in the background of the next wave of solo superhero films. They’d even gone so far as to reshoot a tiny portion of the post-credit tag on Justice League to convert the dialogue from a tease for The Batman into a general tease for the villains forming “a league” of their own.

But then the folks calling the shots around that time in DC Entertainment all got reassigned, and much of what had been planned prior to the release of Justice League was thrown into limbo. Three months after the Deathstroke film was announced as being in development, Walter Hamada took over as the captain of the DC ship, and he began the process of reassessing all of his predecessors’ ideas- since the DC franchise he inherited was not in particularly good shape at the time.

In fact, I’ve heard that they’ve completely moved on from the Legion of Doom concept, even scrapping a proposed post-credit scene in Aquaman where Black Manta joins the group.

Still, whispers of a solo Deathstroke movie persisted. As recently as this past July, Manganiello was teasing that it was still on the horizon. But if that’s the case, that’s news to director Gareth Evans, who has now revealed that things never proceeded past some initial conversations between him and DC.

“Nothing really went beyond those conversations. I haven’t heard anything for a really long time,” he revealed to ComicBook.com. “To be honest, every time I see an article written I keep wanting to ask, ‘Okay, what is it you guys know that I don’t know?’ Because I haven’t heard anything for a good while yet. So I don’t know if that will ever come back full circle at some point. But I know I haven’t had any conversation about that project for a long time now.”

Also notable about Evans’ remarks about Deathstroke is the way he discusses it in the past tense, as if it’s simply something that didn’t happen, or isn’t happening anymore.

“I was feeling my way around it and did a bit of research and read a couple of those comic books. I started to dig in to the origin stories. I like to figure out what the origin of a character is and what shapes them, what paints them as a personality,” he said of his initial research. “There’s been a few iterations, actually, of his origin, which is interesting to see. There was the original way his character was created and then there’s been a few creative licenses taken in terms of how he lost his eye, for example, and stuff like that. So, it was an interesting sort of experience.”

Now, it’s entirely possible that the film is still somewhere in the Movie Battle Royale system that WB/DC has been known to use, and that Evans is simply not the person working on it anymore. After all, if Manganiello was still talking about it being “in the works” in July of 2018, while Evans is implying he hasn’t really heard anything about the movie since the fall of 2017 when those conversations took place, maybe there’s a competing version of the project that has won out and is waiting for its spot on the queue to arrive.

Maybe that’s an optimistic theory, but it’s not completely beyond the realm of possibility, since the studio has a history of setting up development teams on multiple versions of the same movie and then picking a winner and granting them a green-light once one version comes together to their liking.

We’ll just have to wait and see.

Next post Revenger Submission: ‘The Best Man For THE BATMAN’