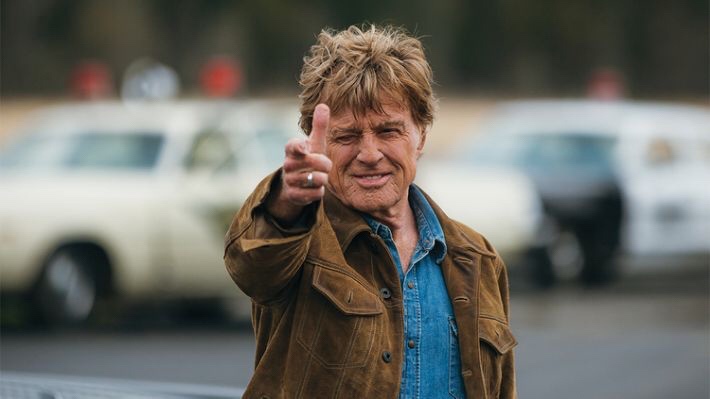 Forrest Tucker is a septuagenarian bank robber whose weapons of choice are a pressed blue suit, charms and a holstered pistol. It’s also Robert Redford’s final role, capping off the career of one of cinema’s finest actors.

The Old Man & The Gun follows Forrest Tucker as he systematically robs bank after bank, charming each of his victims, executing his crimes with gentlemanly manners and utmost professionalism. The film captures his exploits with a an easy going manner, reminiscent of the Frank Sinatra version of Ocean’s 11. Director David Bowery proves himself to be very adept at recapturing the 80’s, and also giving a nod to 70’s era filmmaking, giving the film a spice of the The French Connection to the proceedings to make it feel beautifully lived in.

The weak link of the film is Casey Affleck as Detective John Hunt. The function of the character in this piece is fairly typical for a film about a bank robber. The head detective who is driven to crack the case. The man on the right side of the law who has odd parallels to the criminal he’s trying to catch. I’m not sure if it’s the character that is underwritten or the actor who is underwhelming, but his character in the story leaves no impression. There are moments in the film with Redford that alludes to the idea that they share a connection deeper than that of a cop and criminal. But it’s a notion that is under baked at best. I never got the impression that this case was anything more than a job to Hunt. In a film that centers around a bank robber who charms the his way through his many heists, it would’ve been amazing to see how charmed and possibly inspired Hunt would be from Forrest. But it just does not land here.

Conversely, Robert Redford is phenomenal in his final role. This film is a victory lap for this esteemed actor in the best possible way. It’s a role that is tailored to his strengths as a dramatic actor with charm and wit to spare. His love story with The equally wonderful Sissy Spacek is simply delightful. Spacek plays Jewel, a farm owner and horse lover who takes a liking to Forrest after he lends her an assist when her truck breaks down. Their courtship plays out in a very sweet and honest that crackles with chemistry. It achieves what so few meet-cute rom coms fail to do, which is that we actually ROOT for the two to kiss. It also really wonderful to see a lively and flirtatious love story featuring an age group that often gets disregarded in romantic cinema.

The rest of the cast lend nicely to the easygoing nature of the film. Danny Glover and Tom Waits compliment Redford well as the other members of the Over The Hill Gang. Elizabeth Moss has a memorable cameo as Forrest’s daughter. Tika Sumpter, on the other hand, is woefully underused as Hunt’s wife, Maureen.

This film is a very easy film to like. But with a cast like this, and a craftsman director with obviously loving attention to detail, I wanted a film that I could fall in love with. It’s a solid yarn, but it hangs some of it’s emotional potency on Hunt and Tucker’s relationship, and unfortunately the two characters have no chemistry. Ultimately, however, it’s a pleasant send-off to one of the greats.