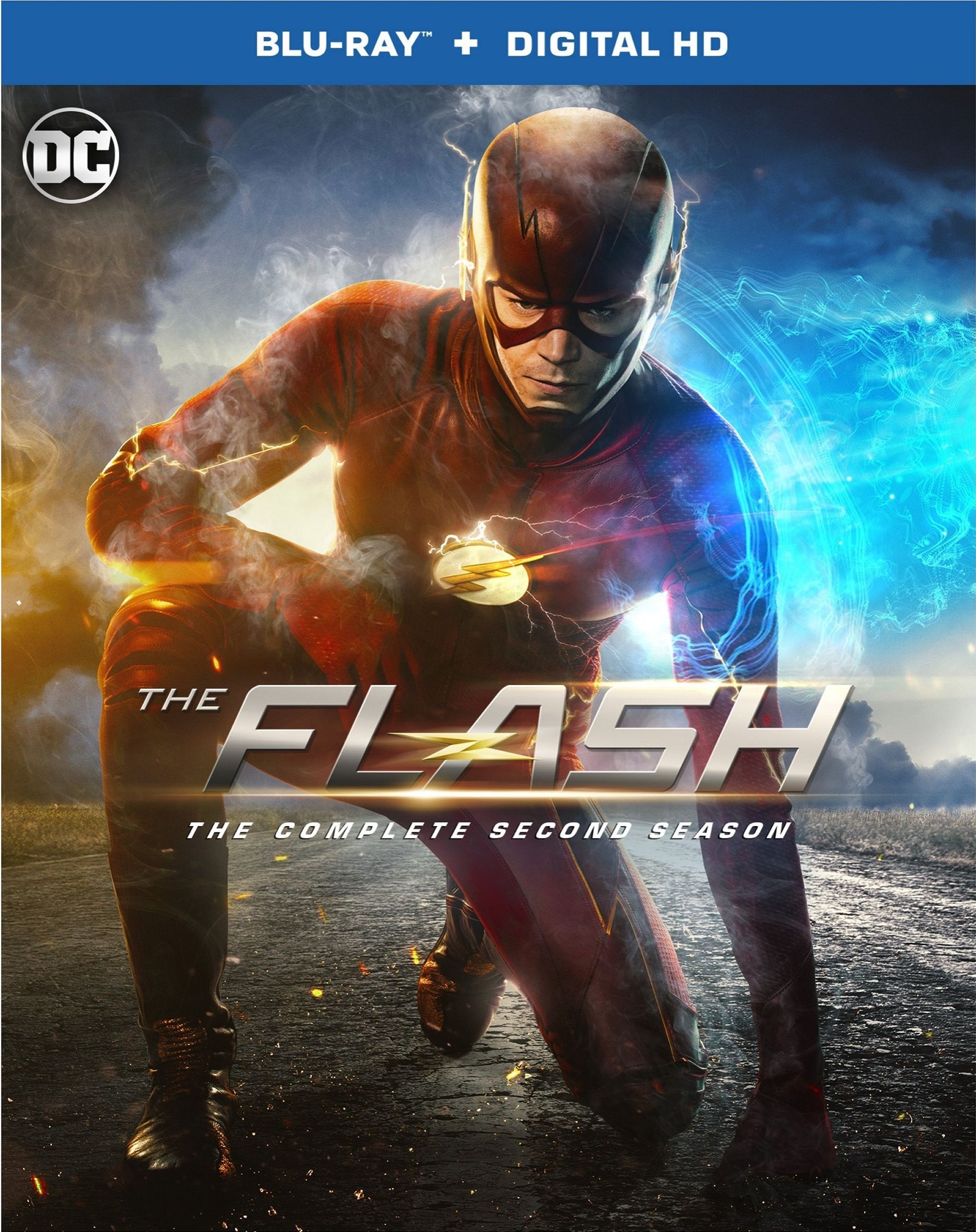 “Following the defeat of Barry Allen’s arch-nemesis Eobard Thawne (aka Reverse Flash), The Flash and his team quickly turned their attention to the singularity swirling high above Central City, which fans last saw consuming everything in its path. Armed with the heart of a hero and the ability to move at super speeds, Barry charged into the eye of the singularity, but will he actually be able to save his city from impending doom?” (The CW)

The Flash was honest to goodness, my favourite television show through the course of its first season. After being so good right from the start and maintaining quality for all 22 episodes. Secretly, I thought Season 2 was bound to suffer a slight decline. The season opener started in a way that almost proved me right. It had jumped 6 months forward, skipping over The Flash saving Central City from the singularity. It opens with a mopey Barry, who is skipping The Flash Day, where he was being honored for his city saving heroics. I felt cheated, in that I didn’t get to see Barry actually save the city from this singularity. Judging from our hero’s disposition, I thought he was going to get all whiney, push his friends away, and fulfil a long standing stereotype of CW programming. However, to my happiness, this was dealt with in the course of the first episode. Team Flash come together to battle The Atom Smasher. While enjoying their reunion and victory, they are interrupted by a man named Jay Garrick, a Flash from an alternate universe. He warns them of a Speedster named Zoom, hell bent on destroying The Flash and other speedsters from alternate universes, to steal their speed.

The arrival of Zoom on the series could have turned out to be repetitive of Season 1. After all, Zoom is another speedster, an evil opposite of Barry, and as comic book fans are aware, Zoom is sometimes portrayed as a derivative of The Reverse Flash or an alternate alias for the character. However, the show makes their version of Zoom stand apart from season one’s Reverse Flash. For one, Zoom is much faster than Eobard Thawne. Where Barry could get very close, and eventually surpass him in speed, Zoom, is much faster then both Reverse Flash and Barry. You can almost sympathize with Eobard Thawne at times. Even though he killed Barry’s mom, when Tom Cavanagh was playing Reverse Flash, I felt sorry for him and that whole, man out of time and wanting to go home routine. With Zoom, I felt no sympathy! He was pure evil, a diabolical villain in every sense of the word. He literally destroys and humiliates Barry/The Flash, paralysing him and dragging him along for all of Central City to witness. After Flash is rehabilitated, he blackmails Barry into transferring his speed to him, and kills Barry’s father right in front of him anyway. All this lessened any sympathy I was starting to have, based on his child hood flashbacks.

The real twist to this season of The Flash, is Zoom’s identity. Zoom is actually the man who introduced himself to Team Flash as Jay Garrick. In reality, he is Hunter Zolomon of Earth 2. The name Hunter Zolomon, as fans know, is another man who wore the mantle of Reverse Flash. This was a great nod to comics’ continuity. Its different then comics continuity but honoring it. Another revelation was that Zoom had the real Jay Garrick of Earth 3 hostage. This character is the Earth 3 doppelganger of Henry Allen. This is a fantastic twist because it allows John Wesley Shipp to stay on the show and it puts TV’s original version of The Flash back into a costume. Teddy Sears was perfect in the role of Hunter Zolomon. He has the look and demeanor of an “All American Boy” and had me fooled pretending to be Jay Garrick. Having Tony Todd do the voice of Zoom was genius. Not only did it help keep up the ruse of the identity switch, but every time Zoom spoke, you felt uneasy and extremely creped out. That is exactly the feeling I hoped for, when they announced the horror legend would be voicing the role. For epic Zoom episodes, check out “Enter Zoom”, “Versus Zoom” and “The Race of His Life”

As I mentioned, the introduction of Zoom brought about the plot point of alternate universes. This provided the season with two of its best episodes in the form of “Welcome to Earth 2” & “Escape from Earth 2.” One of the things I liked with this two parter, was the color palate and aesthetic look. Looking at Central City of Earth 2, it seemed to almost have a dream like brightness to it. Aesthetically, it had an art deco 1940’s look to it. If I remember correctly, I think I even saw a blimp flying through the sky. The absolute best thing about these two episodes, is that they upend the status quo. It’s fun to spot the differences, and allows the cast to play against their character type. In this continuity, Barry Allen isn’t The Flash, doesn’t have super speed, and is married to Iris West and is a geek in the most stereotypical sense. Grant Gustin is definitely paying homage to Christopher Reeve’s Clark Kent with his performance. Speaking of Iris West, the Earth 2 version is a tough as nails police detective. It was such a nice change of pace to see Candice Patton play this, instead of the supportive friend and often damsel in distress. When she’s allowed to go full on feisty, the actress really lets loose. This is actually much more believable to me, than what Season 4 does with Earth 1 Iris. I’ll get there when the time comes.

Jesse L Martin is a far cry from his detective and loving father Earth 1 version of Joe West. On Earth 2, he’s a lounge singer, who loves his daughter, yet absolutely hates and disapproves of Barry Allen. Earth One’s Barry Allen’s stunned reaction to this, makes their scenes together comedic. However, the most striking difference comes from the characters of Caitlin Snow and Cisco Ramon. Actress Danielle Panabaker and actor Carlos Valdes get to shed their goody two shoes characters, in favor of bonafide bad guys, in Killer Frost and Reverb. Danielle Panabaker embraces her full on sexiness when playing Killer Frost. She even made a joke about her Earth 1 doppelganger constantly covering up her breasts. Carlos Valdez as Reverb, reminds me of a modern day twist on a Bond villain. Another great element from the Earth 2 episodes is the introduction of Earth 2 Harrison Wells, once again, played by Tom Cavanagh. He has the cockiness and the supreme intelligence of Earth 1, minus being the Reverse Flash. What is intriguing, is how our Earth 1 Team Flash reacts to him. No one trusts him but he has to earn their trust. When they learn about his daughter and that Zoom has kidnapped her, the team put their PTSD feelings towards their Wells aside and work with him, to save his daughter. The most geektastic moment of the Earth 2 episodes was seeing Barry’s phone directory and seeing the names Bruce, Clark and Diana on there! Yes, in Earth 2 The Flash’s Justice League teammates exist and that makes me happy, so happy in fact, I nearly did a happy dance when I saw that. Even Atlantis was teased. However, the cast and crew had to go and make me sad, by having a scene where Earth 1 Barry has a phone conversation with Earth 2 Barry’s mother. Damn you Grant Gustin! Stop being so good at your job and making me emotional.

The Zoom storyline takes the show to darker places then it’s gone before but Season 2 of The Flash, does have its lighter toned, fun episodes. One of which, is the return of Gorilla Grodd in “Gorilla Warfare.” Once again, they play up the King Kong similarities with the relationship between Caitlin and Grodd. The effects look even better for Grodd this time around, when looking at him in a brighter environment. We also got a tease at a full on Gorilla City, which looked spectacular! If the special effects of this show still haven’t amazed you, then the episode titled “King Shark” will change that. Yes you read that right, there was an entire episode focused on the Man/Shark hybrid. This is the Suicide Squad character, David Ayer cut from the script due to inexperience using an all CGI character, yet The Flash on a much smaller budget, has no fear in using and pulls him off flawlessly. The episode also feature Arrow’s John Diggle, played by David Ramsey, providing his hilarious reactions to the metahuman madness, that surrounds him, this time being King Shark.

The visual effects team also seemed to have altered the super speed effect for Zoom. Even if they didn’t, it’s still riveting to see The Flash chase and fight his villains, while racing up buildings or in mid air even. The battle between them in the finale, was a benchmark changer in terms of excitement and CGI execution. In addition to Zoom, the show introduced the character of Wally West and Patty Spivot. On the show, Wally West is not the nephew of Iris West. Instead, he is her brother. I’m fine with this change from canon because the familial connection still remains and it bonds them even more. I even liked the actor in the role, Keiynan Lonsdale. However, I absolutely hated his big introductory episode, which was essentially a Fast and Furious rip-off. And I’m not talking about one of the good Fast and the Furious movies. Shantal VanSanten played Patty Spivot. While the actress gave a good performance, her characters relationship with Barry Allen was pointless, thus the character and actress was dismissed at the halfway point of the season. There’s no point in trying to shoehorn a unnecessary love triangle into the show, when your shows mythology has already told the audience, that your male and female lead are destined to be married.

Not only did The Flash maintain the quality of Season 1, often times it exceeded it. Season 2 of The Flash has the reliability of Tom Brady, while also possessing the excitement and energy of Cam Newton. Yes, I threw in a football reference! Next up, is my look back at Season 2 of Supergirl. Stay tuned!

Previous post HALLOWEEN On Track For Franchise Record Opening, Plus Details On The Revenger Watch Party!