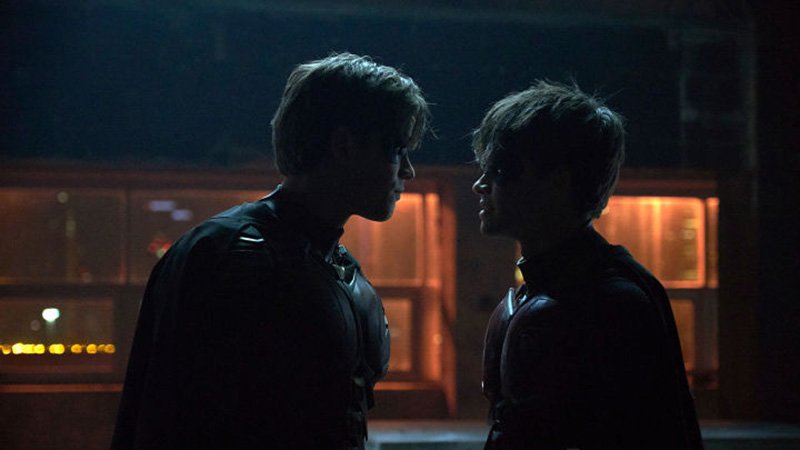 Earlier this year rumors began to swirl that Titans would feature more than just one Robin. Between leaked set photos and episode titles, it was suggested Jason Todd would also be making an appearance on the show as Robin. As of today, official images were released not only confirming Jason Todd would feature in the series, but that long rumored Curran Walters would play the character.

Titans will mark the first live action appearance of Jason Todd and show-runner Greg Walker discussed themes and the dynamic between both Dick Grayson’s and Jason Todd’s Robin’s.

“What I really love about [Jason] as a character is the unbridled sense of self that he has – there’s a lack of… maybe self-awareness, but for sure self-consciousness in terms of how he comports himself and how he moves through the world. He’s completely seemingly unaffected by darkness – he kind of embraces it or walks right through it. He’s a breath of fresh air and that’s what I love about him, he’s got a punk rock, no-holds-barred attitude that’s massively unburdened. There’s a lot of energy that comes with that.”

“You get to watch Dick Grayson struggle when he sees another Robin and how that Robin is different and has a different relationship with ‘dad.’ And the second child gets away with stuff the first child would never get away with in a family, and ours is really a family show.”

“The whole thing is a study in contrasts between the two Robins and the ways that they were raised, or how the shadow – or lack of shadow – hangs over the two of them individually,” Walker teased. “It’s so frustrating to see someone who isn’t bothered by someone else the way you are… like, ‘how are you not bothered by that? Why doesn’t that screw you up?’ There’s something confusing and challenging and unsettling about that for Dick.”

Titans will explore Dick Grayson and his journey to self-discovery both in the world and out of the shadow of Batman. The discovery of Jason Todd as his replacement may be Grayson’s catalyst to become his own hero, Nightwing. As fans, what we know of the characters, may be a hint as to where they go as the series progresses. Could we potentially see a season one ending with Grayson assuming his new persona as Nightwing? Can we see Walters join the cast as a series regular for a second season of Titans? Can Titans second season arc be the downfall of this brash young Robin? Could Walters also show similar growth as Robin and become Red Hood for future seasons of Titans?The history of Titans and Robin along with his relationship with Batman are layered and extensive, and this series can explore countless avenues.

Robin’s last live action appearance comes from Batman & Robin, where it was evidently clear his arc as Robin was approaching an end, and if the series had continued, the inclusion of Nightwing was expected. Although, Christopher Nolan combined multiple aspects of each of the Robins to create an original character for the Dark Knight Trilogy. “Robin” John Blake played by Joseph Gordon-Levitt combined aspects of Dick Grayson, Jason Todd and Tim Drake.

Titans is set to debut October 12 on the DC Universe streaming service. DC Universe is live now with a back log of content, be sure to check it out.

Next post BOX OFFICE: THE PREDATOR Could Be A Record-Breaker!