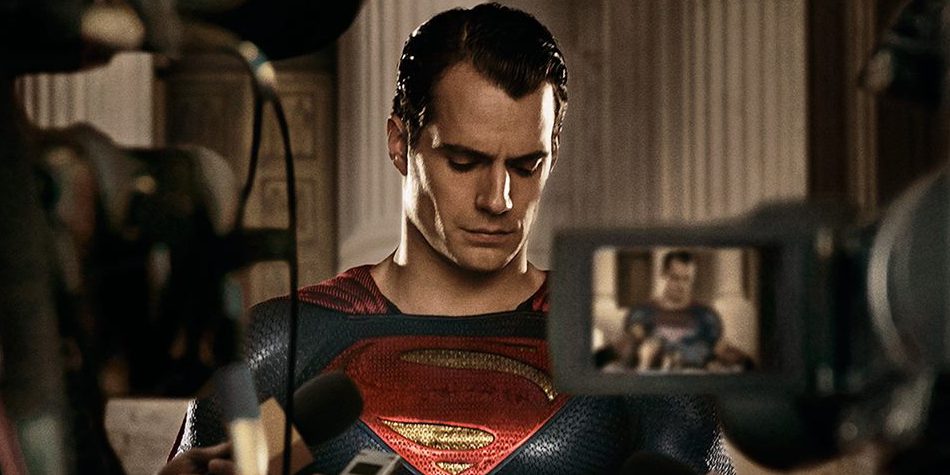 Make of that what you will, but it seems pretty clear that there’s more to this story and that it is, indeed, not over yet.

Earlier today, I- and the rest of the internet- was startled by an exclusive from The Hollywood Reporter about the state of Henry Cavill’s negotiations with Warner Bros. with regard to staying on as Superman. As some of you know, I’ve been tracking this story for a very long time- both as a reporter, and as a diehard Superman fanatic.

It was late last year when I sat down for a one-on-one interview with Mark Millar, where he confirmed that his pal Matthew Vaughn had recently taken meetings about a sequel to Man of Steel. It was also around that time that I heard the studio was keen to get the sequel into production, wanting to- in some way- capitalize on the fact that Justice League brought the character back in a way that was more like the classic Superman and they thought audiences would eat up a chance to see Cavill play this new version of the character.

But I was also there as the power structure changed up at the top of DC Entertainment and everything began to get re-thought as part of the fallout for Justice League not performing the way they’d hoped. Since January, things have been hot, cold, then hot, and- finally- cold again with Superman. On the one hand, they wanted to sign a new deal with Cavill that would allow him to appear in various other films (like a cameo in Shazam! that THR confirmed today), and possibly get a sequel into production next year so it could arrive in theaters in 2020. On the other hand, that all seemingly went out the window after an intense round of negotiations in the spring.

Since then, there’s been zero movement, and I’ve been telling listeners of The Fanboy Podcast that we’re unlikely to hear anything until September when Cavill is done promoting Mission: Impossible- Fallout (which didn’t open in China until August 30). And, as expected, here we are in September and a seemingly final decision has been reached.

So I’ve been paying very close attention to this story with all of its twists and turns, and I even published a comprehensive breakdown on the state of the negotiations- and what each side wants from the other. You can read that RIGHT HERE.

Then last week, I came into even more behind-the-scenes intel- which I shared on the podcast- when it was brought to my attention that the studio simply doesn’t care for Cavill’s manager, Dany Garcia, and that their experience with her has soured them on him entirely. See, these negotiations were supposed to be straightforward; A foregone conclusion. This wasn’t supposed to become some sort of tricky Hollywood power play. But the perception is that Garcia got into Cavill’s ear and made him ask for way more than the studio was willing to give- and we’re not just talking salary demands. It’ includes director-approval and a producer credit, so that he could really have a big say in where Superman goes cinematically from here on out.

The studio wasn’t having any of that, and the fact that Cavill’s side of the equation went from wanting to play ball to taking a hardline stance on his demands, is seemingly being blamed on Garcia’s aggressive negotiation style.

Now, while on the subject of aggressive negotiation tactics, I’m told this story is not yet over.

That’s right, folks, a final decision has not been reached and Garcia, herself, made that clear with this tweet:

Be peaceful, the cape is still in his closet. @wbpictures has been and continues to be our partners as they evolve the DC Universe. Anticipate a WB statement later today.

“Be peaceful, the cape is still in his closet. @wbpictures has been and continues to be our partners as they evolve the DC Universe. Anticipate a WB statement later today.”

Then WB issued the following statement:

“While no decisions have been made regarding any upcoming Superman films, we’ve always had great respect for and a great relationship with Henry Cavill, and that remains unchanged.”

Aside from these official statements that nothing is final just yet, I’ve also spoken to a WB source who says this:

“There’s a lot of stuff spinning around. It’s not a final decision. Someone spoke too soon in these negotiations. Something happened last night is what I’m hearing.”

And that last quote is where things get really interesting. Because this means that some sort of meeting of the minds happened last night, and then today someone leaked to THR that it’s all over.

This tells me that the studio- which has always used THR as its unofficial press office- wanted it to be known that they are not going to be strong-armed. If they are, indeed, the ones who leaked this information to THR, then what they’re trying to convey to Garcia and Cavill is, “We are prepared to move on without you. So either fall in line and play ball, or prepare to walk away from the role of Superman forever.” Do you really think it’s a coincidence that the THR piece makes sure to point out that “Superman is like James Bond, and after a certain run you have to look at new actors“?

Seems like a pretty direct message, if you ask me.

But what if it’s Cavill’s camp who leaked it? Maybe they walked away from last night’s meeting in a huff and decided, “Let’s go nuclear. Let’s let them see how their customers will freak out if they don’t bring Henry back.”

That’s definitely a possibility but, again, with the cushy relationship between THR and WB, I’m more inclined that the responsible party here is the studio.

Also notable in this story is the way The Hollywood Reporter nonchalantly confirmed two Superman scoops of mine. The first is that there was a planned cameo for the Man of Steel in David F. Sandberg’s Shazam! The second is that the Supergirl movie arose as an alternative to a Man of Steel 2, and that the Girl of Steel has essentially replaced Superman for the time being since the studio is at an impasse for how to proceed with Superman.

I apologize for not being able to foresee that negotiations were going to take such a dumpster dive. When I reported that Shazam! cameo, I was convinced- just like the studio was- that the negotiations were going to be straightforward. Remember, they’d been taking meetings with directors; And they’d given Sandberg the freedom to openly reference the events depicted in Man of Steel, Batman v Superman and Justice League quite a bit. They wouldn’t have done any of that if they thought, for a second, that Cavill’s future under the red cape was in jeopardy.

But hey, things changed, and now we’ve got to roll with the punches.

Something I outline in the video below is the idea that Cavill’s departure- if things do end up playing out that way- may not be the end of the world.

In this way, if Cavill does leave, there’s a brutally honest silver lining to this split-up.

For more on this way of analyzing the situation, check out the video below:

Beyond this, don’t lose hope, Superman fans. If you want Henry back, there’s still a chance this could turn around. Remember, Matt Reeves once famously walked Warner Bros. about directing The Batman, only to come back two weeks later when a vulnerable studio caved into his demands. If you make enough noise as a fandom to let the studio know they’ve made a grave mistake, maybe they’ll reconsider.

And for those of you who want Henry gone so that the character can get a fresh start, there’s a decent chance you’re going to get your wish.

As for me, personally, I have some soul-searching to do on where I land on this. Because while I wasn’t a big fan of MOS and BvS, I did think this version of Superman could turn a page and come away from these last few films stronger and more Superman-ly than ever before. And it also breaks my heart that Cavill may never get a chance to make that one, quintessential Superman film that would’ve been for Kal-El what The Dark Knight was for Batman. That watershed moment where a modern day classic is embraced by fans and critics as the height of what these films can be and who these characters are. Instead, he’ll have to walk away with films that were all divisive, polarizing, and that left a negative taste in the mouths of large portions of a very devout fandom. That really stinks, and- as someone who thinks Cavill totally had it in him- it hurts a lot to see all of that potential go right down the drain.

I’ll collect my thoughts as this story unfolds, and I’ll give you my full, raw, confessional take on this subject on this Friday’s 72nd Edition of The Fanboy Podcast.

Next post SOF Original: ‘Can A Cut Heal A Bruise? For Some Superman Fans, It Could’