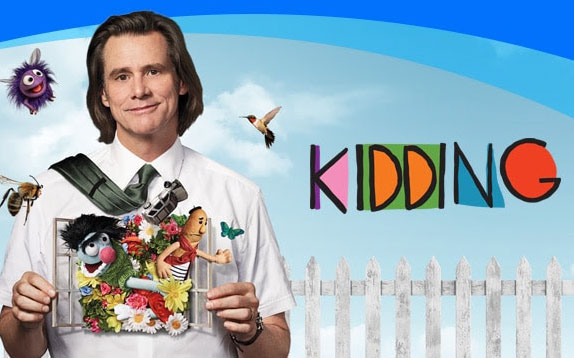 Showtime has a new 10 episode series titled Kidding, and it’s re-teaming Jim Carrey and Michel Gondry. Gondry and Carrey collaborated back in 2004 for Eternal Sunshine of the Spotless Mind, which won the Academy Award for Best Original Screenplay.

Kidding’s premise explores grief through Carrey’s character Jeff/Mr. Pickles, a children’s television icon who must continue to play the upbeat man on-screen while his family falls apart around him after the death of one of his young sons.

Gondry became attracted to the project because of his experience with Carrey on Eternal Sunshine, and Carrey’s ability to become “sad and touching,” despite mainly being known for his larger than life comedic antics. The two have developed a sense of trust working together, but that doesn’t mean working on Kidding was always a walk in the park.

“One time he was frustrated and he yelled at me, and I told him, ‘Jim if you scream at me I will stop liking you, and if I don’t like you I can’t direct you,” Gondry tells Variety with a laugh. “I said, ‘Jim, let’s have a good talk because I think you’re pissed off, and I can see that in the camera.’ We talked a bit, we had a big hug, and we were right back to being a creative team.”

Carrey has predominantly been recognizable through his comedic run in the 90s, with a string of highly successful films such as Dumb and Dumber, Ace Ventura, The Mask, Liar Liar, and Batman Forever.  However, Carrey’s range goes beyond that, with his more dramatic roles often getting overlooked by his comedy. Carrey received two Golden Globe Awards for Best Actor in films The Truman Show and Man on the Moon, and a third nomination for Eternal Sunshine.

Gondry a seasoned entertainer himself, is known for his inventive visual style and his ability to manipulate scenes to fit the unconventional needs of the story. Aside from Eternal Sunshine, Gondry’s biggest film to date was 2011’s Green Hornet starring Seth Rogen and Christoph Waltz.

Eternal Sunshine follows an estranged couple who have erased each other from their memories, then, started dating again. Eternal Sunshine and Kidding both share a through line of grief and overcoming of it, which indicates the similarities that may have drawn Gondry and Carrey back together after all these years. Grief in Kidding comes in the form of loss of a loved one with the death of his son, and Eternal Sunshine in the form of a romantic partner and the difficulties of dealing with letting go.

Kidding is set to debut tonight at 10pm on Showtime.

Next post Weekend Box Office: THE NUN Scares Its Way to The Top With Franchise Best Opening!