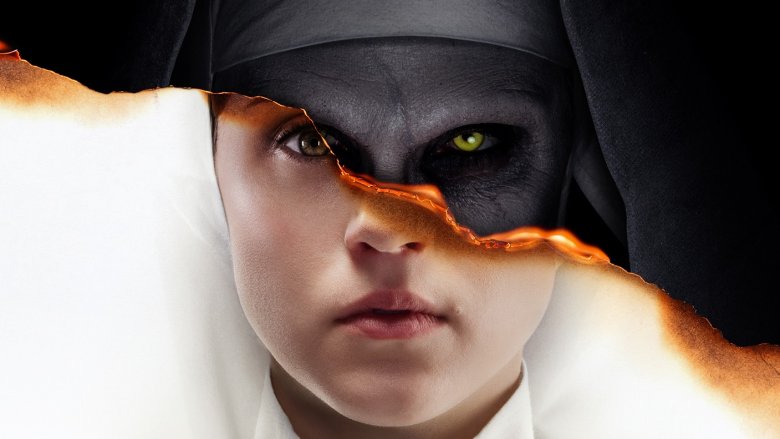 Variety is reporting The Nun is outpacing all other Conjuring Universe films in pre-sale tickets.

The Conjuring Universe consists of four films up to this point. The horror film series made its debut with James Wan’s The Conjuring, which opened to both critical and commercial acclaim. Wan returned for the sequel, The Conjuring 2 and helped produce the prequel films Annabelle and Annabelle: Creation, the latter directed by Shazam!‘s David F. Sandberg.

The Nun follows a priest and a Catholic novitiate, as they uncover an unholy secret in 1952 Romania. The film will premiere this Friday September 7th with an estimated weekend opening of $36-$45 million, out grossing the franchises top opener, The Conjuring of $41.8 million. The Conjuring Universe has a combined total worldwide gross of $1.2 Billion against a budget of $81.5 million, making it one of the most lucrative franchises in history.

While Warner Bros is working hard on their next entry for Worlds of DC, they are counting on Wan to deliver this year’s Aquaman to similar commercial and critical appeal. Warner Bros.’ extremely successful Conjuring Universe has a been a source for their Worlds of DC as the next two entries in this shared universe Aquaman and Shazam are directed by Wan and Sandberg. Returning to the well for more, Warner Bros transitioned Walter Hamada who helped shepherd all The Conjuring Universe films and It for New Line Cinema and Warner Bros, to oversee Worlds of DC.

You can read all about how the success of these horror films, and of New Line Cinema, actually factors into the way Warner Bros. intends to breathe new life into their DC properties RIGHT HERE!

The Nun is set to make a strong debut for the series, and while Warner Bros The Conjuring Universe is successfully going strong with five films in, Universal is still struggling to launch their own shared horror universe, Dark Universe.